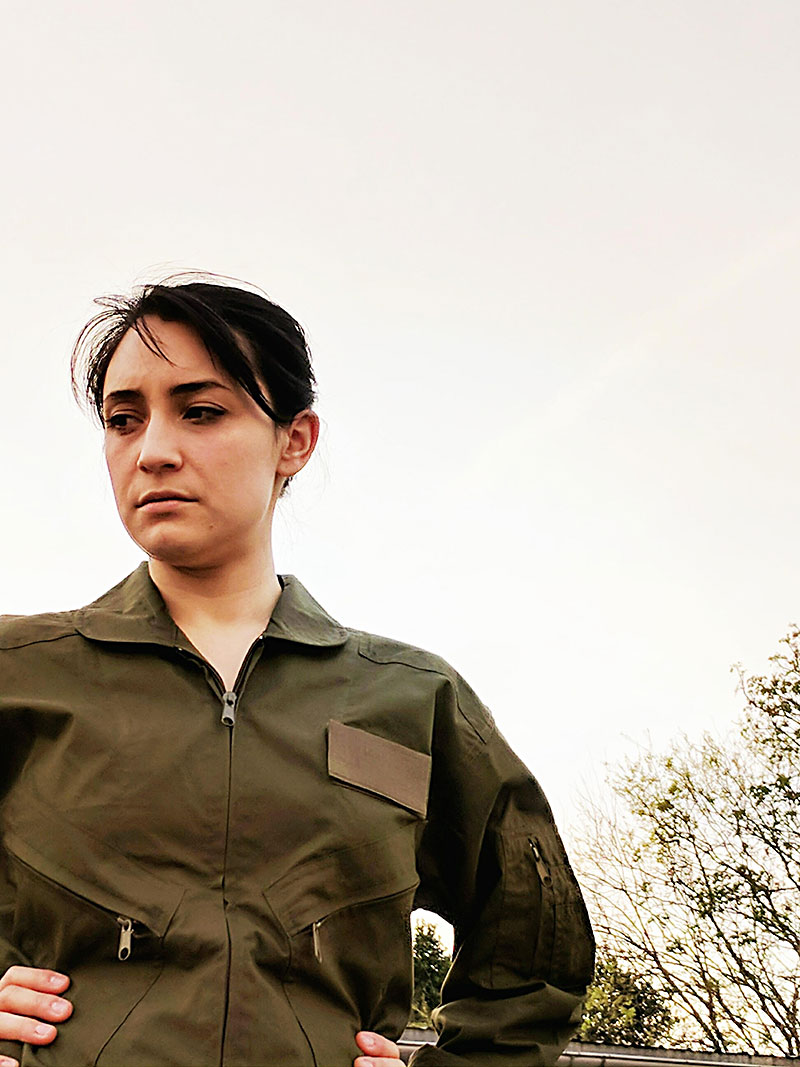 Sarah Danko is 5'4" tall. The absolute minimum height required of a pilot in the U.S. Air Force, it turns out. Why bother with this research, you ask? Danko plays a fighter pilot in Grounded, the latest production by Street Corner Arts. She seemed a bit short for a pilot to me, and as a military child, I know what sticklers they can be about such things. I had to check. There had to be something there for this critic to criticize, right?

Penned by Michener Center for Writers alumnus George Brant (Elephant's Graveyard), Grounded is a compelling one-hander. Danko's unnamed character starts as a hotshot fighter pilot, soaring through "the blue" in her F-16, which she affectionately calls "Tiger." Like most flying aces, she's in it for the thrill of flight: the speed, the adrenaline, and, of course, the respect that comes with the flight suit. While on leave, though, she becomes pregnant and is grounded from flight status. She marries the baby's father, Eric, and spends a few years with her feet planted before the itch to fly becomes unbearable. Much to her chagrin, she is assigned to remotely pilot attack drones rather than return to "Tiger." Her commanding officer assures her that drone pilots will be "the next hot shit," though she sees the assignment as a relegation to the "Chair Force." She makes her peace with it, but after too much time staring into the gray video feed of a desert half a world away, a toll is exacted on her psyche as well as her family life.

Grounded is unique in its ability to tell a story of this nature sans specific political leanings. One typically assumes a play about the armed forces will bend left in its message, but here we simply see the life of a female pilot. And though it explores the potential horrors of unmanned warfare and civilian casualties, it does so through the eyes of a character you might just label conservative. It's about the story, not the message. And how refreshing to see a war through a female lens, right?

Danko's performance is commanding, full of subtlety and authenticity. From the very beginning, she convinces us of her pride in the uniform she's earned. She remains (sorry) grounded in the moment throughout the 80-minute show, and the energy never drops – she's as believable as a cocky stick jockey as she is a devoted mom. Director Benjamin Summers successfully assists Danko in shaping the character, avoiding every opportunity to slip into melodrama and never letting the pilot become a caricature, especially when she starts to unravel.

Chris Conard and Rommel Sulit's set is simple yet effective. A huge, curved scrim (by Brandy Lee Harris) serves as the screen for Lowell Bartholomee's video design. Bartholomee keeps us in nearly perpetual motion with images of the blue sky, the gray desert through a drone lens, and more – the brilliance here is that these images are more suggested than they are detailed and therefore don't detract from the action onstage. Bartholomee also handles the sound design, which ranges from ever-present white noise to specific song edits, including a hilarious piece by Peter Stopschinski (performed by Lana Lesley) that is better left as the hilarious surprise that it is.

There's a symmetry to the simplicity of the production that's quite lovely; the script is aware that our collective unconscious knows what situations and time frames the pilot refers to and wastes no time with jargon or exposition, the design lovingly nudges the imagination in the right direction, and a strong solo performance that never flies too close to the sun leaves us questioning our own sense of empathy and morality. Street Corner Arts has a big thing in a small package here, one I've been thinking about for days. While I hate to go for the easy commentary, Grounded flies pretty damn high.