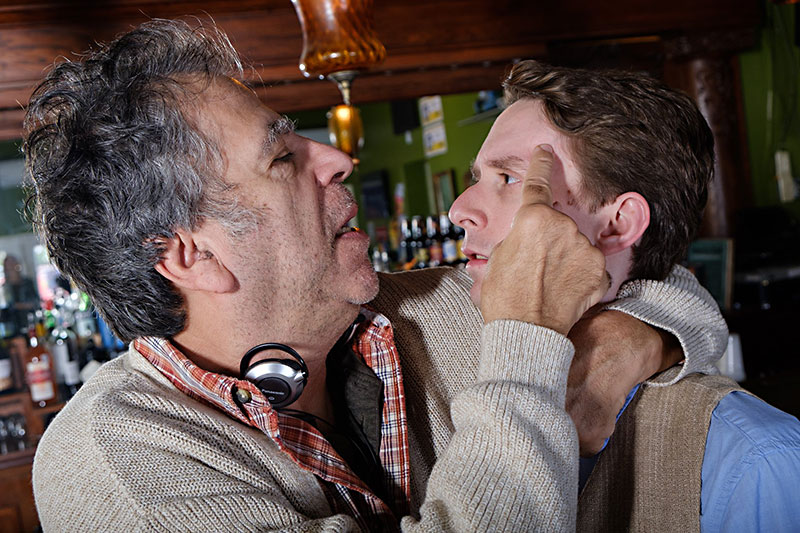 The setting is a dive bar on the ground floor of an abandoned motel, somewhere in New York City in 2006. It's the kind of place that exists only in the past, in season 2 of Unbreakable Kimmy Schmidt, and in plays like Steven Dietz's Yankee Tavern. A meeting ground of past and present, it's the right kind of place to stage a play that's about belief and disbelief.

Adam (Will Douglas) is a graduate student who inherited the establishment from his late father. His fiancée Janet (Kelsey Mazak) wants him to be done with the place, but he perseveres in tending the bar in the face of imminent demolition. Partly that's because Yankee Tavern is the second home of his father's friend Ray (Bill Karnovsky), whose first home is upstairs in one of the abandoned rooms.

Ray has a thing for conspiracy theories: the JFK assassination, the moon landing, all the classics up to and including 9/11. He has no trouble believing the police report that Adam's father killed himself, when Adam himself is not so sure, but he refuses to believe any official explanations about what happened in 2001. It aggravates Adam and Janet to no end. Then one day a man named Palmer (Greg Ginther) arrives in the bar and orders two beers, leaving one of them untouched. He claims to have extra information about 9/11.

This isn't a play about 9/11. Yes, the characters talk about the details surrounding those events at length, but it's really a play about what we choose to believe. Staging the play now is entirely topical, in light of how fragmented America's relationship with objective fact has become. Listening to long minutes of Ray's theories of powerful corporate and governmental forces secretly arrayed against us all might hit some audiences in just the right intellectual spot. For others, like this reviewer, who find themselves exhausted by the realities of confirmation bias and how it's gotten us where we are, the extended discussion of how nobody official can be trusted is fatiguing and feels not unlike something off either an op-ed page or the comments section, depending on where you get your news.

Regardless of where you are emotionally with the subject, it's executed well in the script and in performance. Director Norman Blumensaadt has assembled a good cast for the Different Stages production. As Palmer, Ginther especially strikes the right combination of sympathetic and downright creepy. The design team has very effectively reproduced the feel of the stuck-in-time bar, examples of which I'd list for Austin except they've all been torn down now to build mixed-use condos.

Yankee Tavern is a solid production of a layered script with good actors. For those eager for a deep dive into their relationship with the truth and how they form beliefs, it makes for a stimulating evening of theatre.