Showdown on the fifth floor 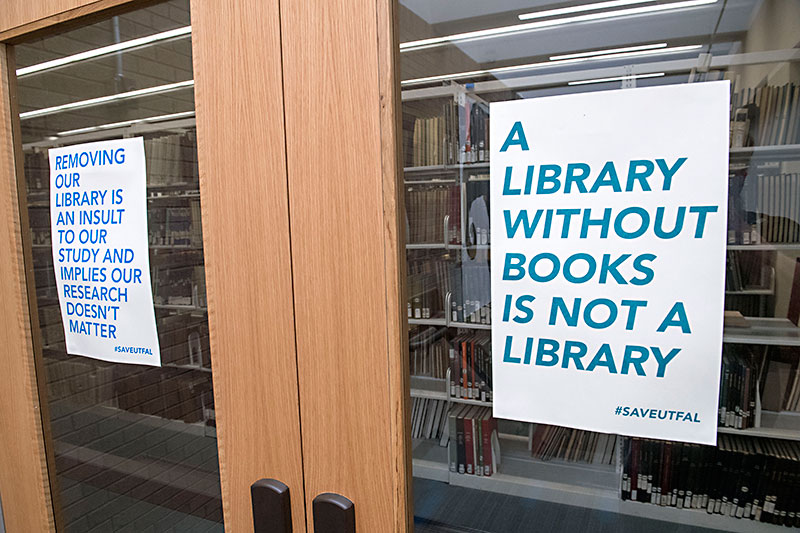 A tale of two floors: On one, rows and rows of books filling the length and breadth of its 18,000 square feet, with students quietly browsing the stacks or exploring the materials' contents – a space of silence, study, and individual discovery. On the other, a hive of classrooms with computers, whiteboards, and students working together – a space of instruction and collaboration.

The quiet floor has been like that since the E. William Doty Fine Arts Building opened at the University of Texas in 1979: a repository of books, periodicals, journals, scores, and other collection materials in the UT Fine Arts Library (FAL). And actually its buzzy neighbor one floor below was like it for 38 years. But in 2017, the lower floor received a 21st century makeover, and that sparked a contentious campaign across the College of Fine Arts to ensure that the upper floor never becomes like the lower.

The transformation of the Doty Building's fourth floor arose from the need for a home for CoFA's new School of Design and Creative Technologies, a coalescence of the popular arts and entertainment tech programs (game and mobile media applications, integrated design, music and sound, new performance technologies) that the college had begun offering over the past decade. When UT's administration vetoed a new facility for the school and other sites around the Doty proved unsuitable, Dean Douglas Dempster turned to the FAL, which he saw as underutilized. Vice Provost and Director of UT Libraries Lorraine Haricombe, who had also agreed to devote part of the library's third floor to a maker space dubbed the Foundry, signed off on the plan to remake the fourth floor. (Full disclosure: I've spent nine years on the UT Libraries Advisory Council. I am also a graduate of the UT College of Fine Arts.)

The School debuted last fall to much fanfare. It was credited with reversing a 20-year decline in enrollment in the college (a drop of 20%, Dempster says) and showed CoFA's willingness to embrace digital arts and new media. But that progress came at a steep cost: a full floor of the library's stacks. The materials there had to go somewhere, and while some could move upstairs, 55,000 volumes, 20,000 journals, and 75,000 DVDs and CDs were packed off to remote storage – either the Collections Deposit Library on the Pickle Research Campus or the Joint Deposit Library, a partnership between UT and Texas A&M, at College Station. With 240,000 materials already housed off-site, this brought the number of remotely stored FAL materials up to 390,000, or more than 60% of the Fine Arts Library's holdings. The clearing out of so many materials at once was a shock to the system for students and faculty members and stoked fears that the fifth floor would soon be cleared out as well.

In an Oct. 18 memo to CoFA students, faculty, and staff, Dempster defended the repurposing of the fourth floor, citing the serious drop in the number of materials checked out from the FAL: from 216,000 in 2012-13 to fewer than 100,000 in 2016-17. While allowing that "many make good use of [the library] every day," he argued that "one is hard pressed at any random hour to find more than a handful of students studying or browsing the collection." By contrast, the rooms on the remade fourth floor see "hundreds of students and teachers working" on any weekday. He added, "The question is not whether a great research and teaching collection close to hand is a good and treasured thing, but whether we can be making better use of the space in the Doty Building in light of these conspicuous trends and alternatives to managing the collection." To that end, Dempster pledged to form two working groups made up of faculty, students, staff, and librarians to study where in the college new programs could be housed and any alternatives for housing the Fine Arts collections on the fifth floor.

Recipients of the letter weren't reassured. Within days, Butler School of Music faculty and the Graduate Art History Association sent the dean letters of concern, which were followed by similar letters from faculty in the Department of Theatre & Dance and the Department of Art & Art History, as well as a letter signed by more than 400 alumni. The Daily Texan reported that 100 students "voiced opposition to the removal of fine arts books and collection materials" at a town hall with Dempster in November. Fliers posted around campus stated "Please don't take away our books" and "Removing our library is an insult to our study and implies our research doesn't matter." A website, SaveUTLibraries.com, began collecting statements of protest and news reports about the issue, and promoting opportunities for action, such as signing a Change.org petition (it currently boasts more than 6,100 signatures). In March, activity accelerated, with more letters streaming in (from curators and staff of the Blanton Museum of Art, the Undergraduate Art History Association, and many individuals); students picketing Dempster's speech at SXSWedu; artist Sean Ripple creating the FAL-related project Remote Storage; and a battalion of students and faculty members speaking out at a meeting of the UT Faculty Council, which then passed a resolution protesting the removal of materials from the FAL and repurposing of space within the library without "real consultation of the faculty."

The idea that CoFA faculty was not consulted on the FAL changes or what would be stored off-site is among the most common criticisms of those behind the move and where some of the deepest resentment lies. UT Libraries spokesperson Travis Willmann says that "UT librarians briefed faculty members in each of the CoFA departments ... about plans to consolidate the on-site collection on the fifth floor and move some of the collection into storage," but art history professor Richard Shiff contends that the move was presented at the briefings as "a fait accompli. It had been decided, and we were being informed what the decisions had been. We had no input on those decisions." Linda Henderson, also an art history professor, says she happened to hear about materials being boxed up for storage and launched an 11th-hour appeal to librarians to keep on-site five art journals that were indispensable to colleagues and students.

Over the past six months, CoFA faculty and students have laid out a long list of arguments for preserving the fifth floor as it is, from the inefficiencies of retrieving off-site materials to serendipitous discoveries that arise from browsing through the stacks to the damage a diminished library would have to UT's standing as a research institution. It would take another article as long as this just to summarize them all.

Though administrators steadfastly insist that no decision has been made regarding the future of the Doty's fifth floor, the assertion has been met with widespread skepticism, if not cynicism. This was most apparent at the March 19 Faculty Council meeting, when Provost Maurie McInnis' remarks, which opened with this point, were followed by nearly two hours of faculty and students calling that claim into question. The very first speaker from the floor, Classics professor Thomas Palaima, cited prior instances when the UT administration's actions were at odds with its words. Later speakers challenged not only statements by administrators but also the character of those making them, the most sensational being Classics professor Rabun Taylor likening Dempster appropriating the fourth floor to a "tinhorn dictator" making "a nakedly authoritarian land grab."

If it wasn't evident before that meeting, then it was clear after that there's a rupture in trust between UT's faculty and students and its administrators over this matter. The former looks to have lost faith in the latter, and no one's drinking what they're serving. Indeed, the well may have been poisoned at this point. That could change April 2, once the dean's working groups report in, or later, when actions are taken in their wake, but for now, UT's Fine Arts Library seems like a house divided against itself.

A version of this article appeared in print on March 30, 2018 with the headline: Showdown on the Fifth Floor 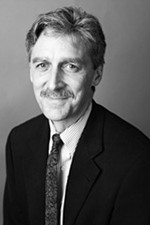