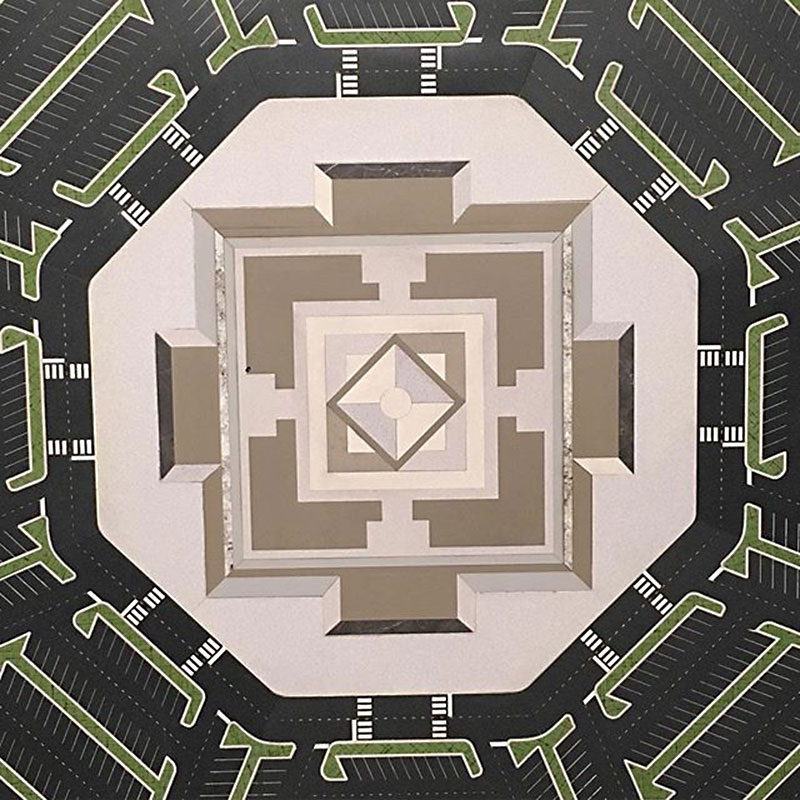 You've been there: behind the wheel, cruising slowly up this lane and down that one, again and again as you scout for the perfect slot to ease your auto into. You're determined to get as close to the mall as humanly possible, so you just keep a-drivin', past hundreds of meticulously measured spaces lined in white paint and those strategically placed light towers and the occasional concrete-enclosed island of greenery, weaving up and down those narrowly prescribed paths like your car was stitching some floral outline on the asphalt around the shopping center.

You've been there. So you can expect a touch of déjà vu when you visit Julie Libersat's installation at Women & Their Work. On a large console in the gallery is a screen giving you the driver's-eye view from a car continuously wending and winding through the parking lot of what might be an old-school suburban mall. It certainly sounds like an old-school suburban mall – that is, the soundtrack to the visuals has that same chirpy, jingly, aspartame-sticky sound as the musical pap piped through those colossal consumer cathedrals back in the day. (The tune isn't "The Girl From Ipanema," but it could've been cloned from a clone of a Muzak take on "The Girl From Ipanema.") Both auto and music are on a never-ending loop so you're locked in this Sisyphean circuit, seeing the mall, hearing the mall, but never stopping and actually going into the mall. It remains this strangely inaccessible structure, made even stranger for 1) its familiarity, for being this place that we're accustomed to going to and going into; and 2) the total absence of people. No cars in the lot, no pedestrians walking to and fro, no evidence of human activity at all. Just the mall and surface lot surrounding it. It appears to have stopped being a place for families to shop, for teens to hang, for seniors to walk their daily mile. Now, it's just a place. We recognize that as the fate of many a mall already (Austin's own Highland being a prominent example) and many more to come (analysts project a quarter of U.S. malls to shutter over the next five years), and maybe the video's perpetual circling of the mall is an echo of the zombies in Dawn of the Dead shambling back to one because "this was an important place in their lives."

But even the zombies gathered there in groups. That isn't necessarily the case here. You may visit the gallery and be, as I was when I went, the only person there. In which case, this mall you keep driving around, that you can never enter and that has no connection to its original purpose, becomes a thing of contemplation, an edifice you can access only through imagination or memory. Libersat nudges you toward this path with a labyrinth marked out on the gallery floor in the same thick yellow lines used to delineate parking lot spaces. And you can open an app on your smartphone that allows the video to play on it as you walk the labyrinth – the screen becoming a miniature windshield, where you watch your virtual car make turns even as your physical body does. I doubt that this is what the medieval monks who developed such winding walking paths had in mind, but it can shift one's perception to a more reflective place regarding these bastions of commerce. Seeing a mall stripped of signage and products and customers, we're drawn to its architecture, and Libersat calls our attention to the geometrics of it, in a large sculptural work and another video that expose a view of a mall we rarely see: from the air. In the sculpture, the mall metamorphoses into an intricate interlocking abstract: a circle within a diamond within a square within another square within a cross within another square within another cross within an octagon, from which radiate tiny lines like little beams of light. The mall is still present, glimpsed in the parking space lines, but the overall image suggests a mandala that you could find yourself meditating on.

Because the sense of the mall is ever-present (mostly in that cheesy earworm music that never stops playing), I was drawn in my mind to malls in my past – Highland and Northcross in Austin, Parkdale in Beaumont, Big Town in Mesquite – that held moments of significance to me. Some of those related to items purchased there, but more had to do with people and occasions, experiences shared, and I couldn't help but smile at them. So, yeah, Joni, I know what you meant when you sang, "Take paradise, put up a parking lot," and I'm right there with you where rampant development is concerned. Still, as I drove the empty parking lot of "Paved Paradise," awash in memories, I considered your other lyric that asked, "Don't it always seem to go that you don't know what you've got 'til it's gone?" and a part of me wondered if now that might not also apply to malls.