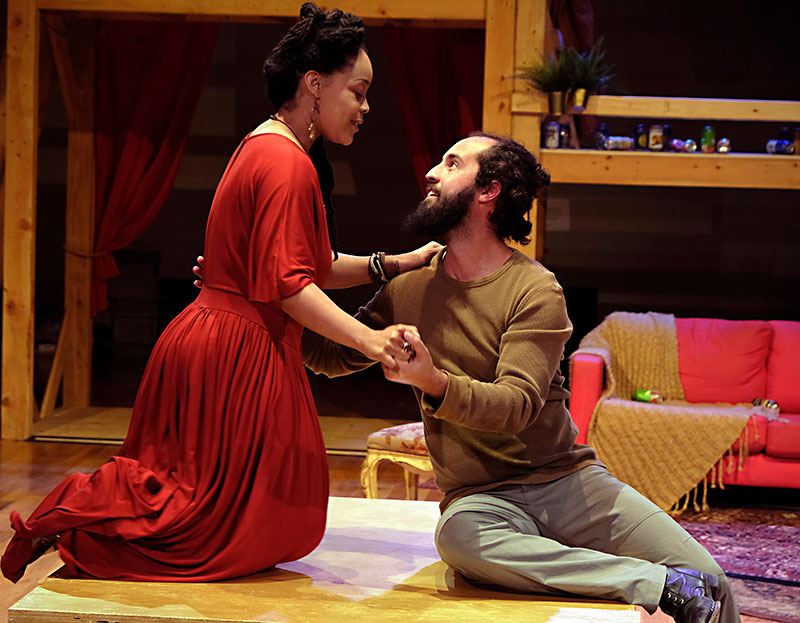 Crystal Bird Caviel as Cressida, and Noel Gaulin as Troilus in Fixing Troilus and Cressida (Photo by Bret Brookshire)

It's easy to forget that Shakespeare wrote a play about the Trojan War, because it almost never gets produced. Troilus and Cressida isn't as cohesive as his major works, and he uses some thematic threads that don't make for the most awesome screen adaptation ever – like, maybe it's OK to compromise in love if you're trying to save your own neck. Romeo and Juliet it ain't.

Enter the Fixing Shakespeare series, courtesy of the Rude Mechanicals and Kirk Lynn as the credited writer. The third show in the series, Fixing Troilus and Cressida follows the same development concept: Replace all of Shakespeare's language with contemporary English and then edit like crazy. The result, as in the first two installments, still retains a fair share of Shakespeare's broader rhythms, in that characters grab your attention and speechify for a bit and then give the other person a chance to respond. But then some of the lines are reduced to a dumbfounded, "Well, what the fuck?" or some such, and the result is hilarious and even engrossing.

As in all of the Rudes' work, the ensemble is everything. Everyone is by turns hilarious and engaging. Comic timing and physicality are key, and each member of the cast finds that sweet spot of where to place their character on the spectrum between performative and natural.

You almost hate to highlight any one performer, but I'll do it anyway: Hooray for the choice to turn Agamemnon into Agamomnen, lady commander of the Greeks (Lauren Lane). Lane would be delightful to watch even if she were just sitting in the corner drinking a cup of coffee, so imagine the delight in seeing her play the part of the commander of the Greek forces. And not just the commander, but one who is just trying so hard to get everybody to do what she says but something's not clicking with her management style and can't the war just be over already so they can go home? Please? It's also so pleasurable to watch an actor of her caliber embrace the physical silliness of the part in service of the larger narrative.

Another note on the ensemble: Let this production be submitted as evidence that casting all sorts of different people in a show together can make the audience experience more rewarding. At the basest level, everybody just looks and sounds different from one another, and the visual and auditory experiences become more interesting as a result.

Staged by Alexandra Bassiakou Shaw in Zach Theatre's Nowlin Rehearsal Studio, the house is intimate enough to allow audiences to see close reactions and smaller actions, like Ulysses' (Jeff Mills) "What the fuck" lines (there are lots of F-bombs in this script) or Paris' (Derek Kolluri) single-minded round of triangular croquet/lacrosse (not sure which). The set (Amanda Perry) is appropriately simple, as with the other productions in the series.

The ending of Fixing Troilus and Cressida carries the Rudes' signature flair, turning a tragic finish (spoiler: Troy loses) into a quick bit that's oddly life-affirming. It feels a shade tacked-on, but seeing as the company is doing a repair job on a mess of an original, it works out.

Zach Theatre Nowlin Rehearsal Studio, 1426 Toomey
www.rudemechs.com
Through March 31
Running time: 2 hr., 30 min.
A version of this article appeared in print on March 16, 2018 with the headline: Can’t This War Be Over Already?

The Rude Mechs' Field Guide
There's much to ponder in the second draft of the company's mash-up of Dostoyevsky, stand-up comedy, and spiritual belief