"Rodney McMillian: Against a Civic Death" at the Contemporary Austin

In this thought-provoking exhibition, the Suzanne Booth Deal Art Prize winner asks, "What does an architecture of power look like to you?" 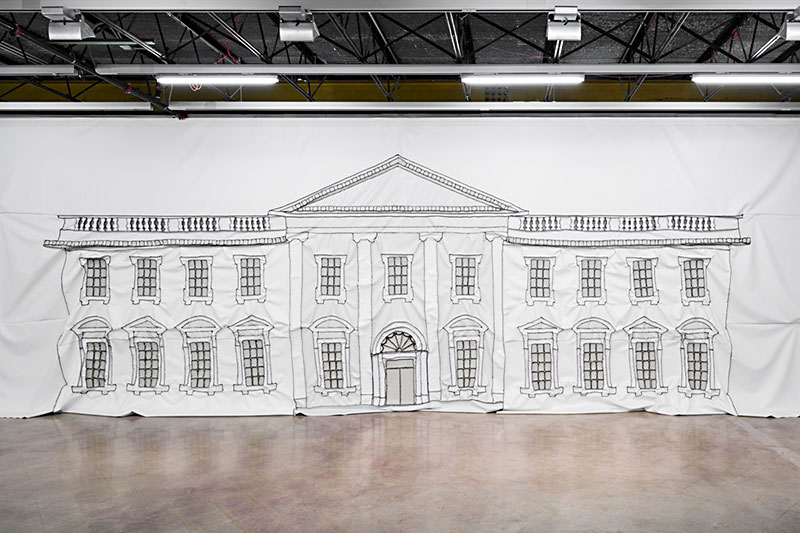 On July 25, 2016, in Philadelphia, a black woman gave the most memorable speech of the night to a room full of Democratic delegates. Controversially, and correctly, she stated, "I wake up every morning in a house that was built by slaves." For the better part of eight years, Michelle Obama woke up in the southwest suite of the classic Greek Revival building we call the White House. Rodney McMillian renders this infamous structure in limp vinyl across an entire wall, the imposing introduction to "Against a Civic Death," his show at the Contemporary Austin, the result of McMillian's receipt of the inaugural Suzanne Deal Booth Art Prize.

The piece, The White House Painting, is a pristine white outlined and assembled by cursive stitches of black thread. Viewers lift either edge of the tapestry to enter a darkened viewing space behind. Here, a screen plays Untitled (neighbors), a video that museum personnel warn you some may find disturbing.

Four figures covered in bedsheets emerge from the water onscreen. All trained ballet dancers, they swoop through a field at dusk and make their way to a gazebo supported by neoclassical columns. Now nighttime, they circle the structure and begin a convulsive choreography that culminates in each figure thrusting against a column. It's an absurd gesture, as stupid as the ideologies and systems clearly referenced, white supremacy and the pervasive bastions of power that reinforce white, masculine privilege. Here are four men attempting to penetrate the most overtly phallic architectural feature. Absurd and stupid, but that doesn't prohibit their being dangerous. While the first instinct is to laugh, the second is to shudder, and perhaps if I weren't white, those might be reversed. By the end of the roughly 20-minute film, the figures seem exhausted, heaving unevenly. You leave the space, also exhausted, and ascend the stairs to part two of the show. 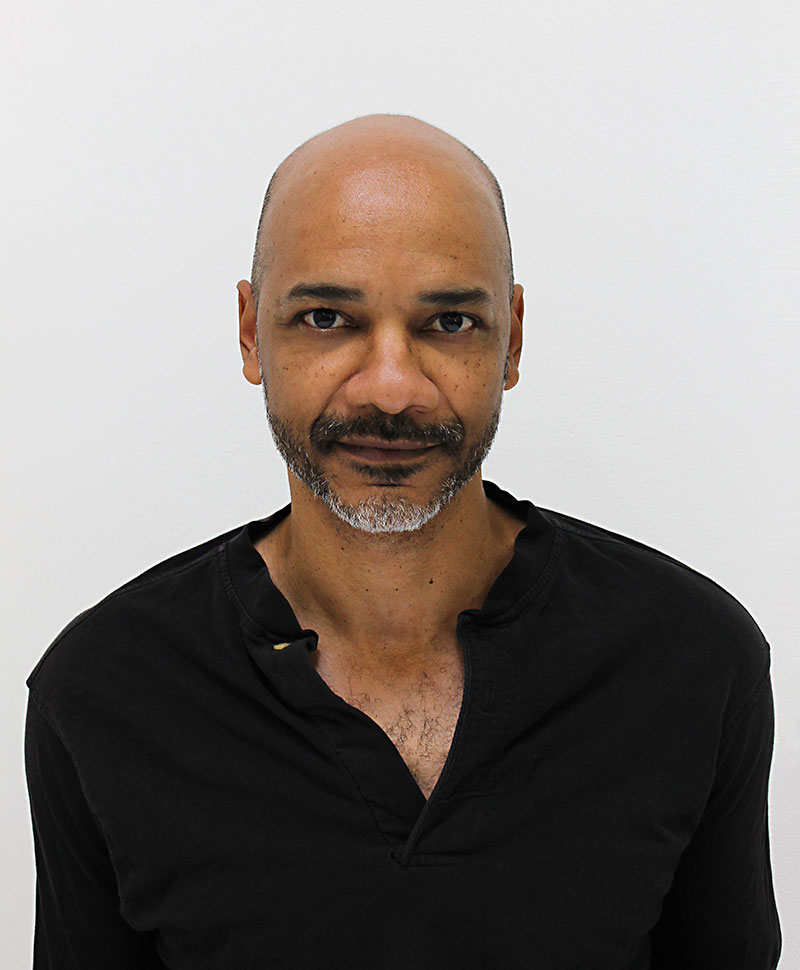 Rodney McMillian
McMillian has built a career examining the intersections of race, power, consumption, and place in American society.

On May 22, 1972, in Los Angeles, a black woman gave a rousing speech to a group of UCLA students. She proclaimed, "So you're white and they're black, what's the difference? ... So you're white and they're black. Both of you are have-nots. You better get together." At the end of Richard Nixon's first term, Shirley Chisholm was in the midst of a bid to become the Democratic nominee for president. The sound of this speech fills the second floor of the exhibit, a stark difference from the first. The recording is part of pod: frequencies to a manifestationing, otherwise consisting of families of black vessels in all shapes, sizes, and finishes on top of white tables and arranged around an immense black boulder-like pod.

A few months after Chisholm's speech in 1972, a black woman walked into Shore Haven Apartments in Brooklyn and asked whether there were any apartments available. She was told no. Shortly thereafter, a white woman walked in and made the same inquiry. She was provided two immediately available options. Both were part of a government investigation into Trump Management, Inc., and its young president, Donald Trump, an investigation that produced testimony alleging the company's literally codified discriminatory practice: Applications of minorities were said to be marked "No. 9" and "C."

McMillian has built a career examining the intersections of race, power, consumption, and place in American society. With this show, he asks the viewer, "What does an architecture of power look like to you?" He proposes some answers: First, an architecture of power is immediately recognizable in scale and symbol, resting on a not-so-buried history of exploitation and violence. On the second floor, there is another possibility, one elevated above the first and directly opposing it. This is the collective power found in black organizers, the power of assembly despite differences and of amplification of marginalized voices. In 1972, Shirley Chisholm considered a future in which she lived in the White House as president and the metaphorical first step she would take: "The first thing would be, it would no longer be the White House; it would be the polka-dot house. The dream that everyone speaks about must become a reality, young people."

A version of this article appeared in print on March 16, 2018 with the headline: Blackness and a White House