In their joint show, the two artists use paper crafts as a medium for exploring how traces of the past disrupt the present 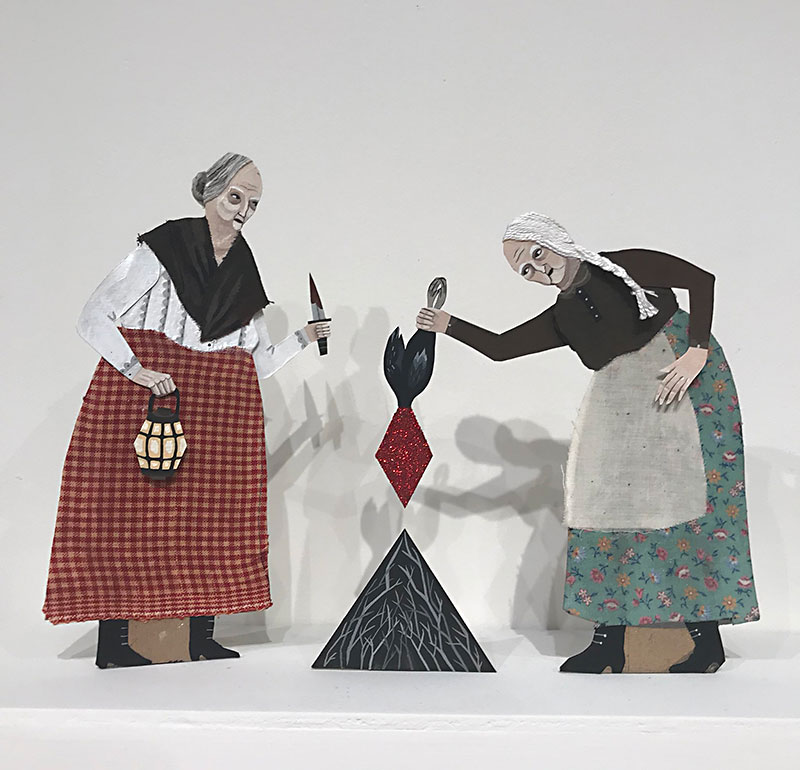 A Ritual by Katy Horan

A diamond-shaped cascade of folded paper sculptures, pink, red, and white, tumble from the ceiling above a small mirror coffin on the left side of the gallery. On the right side, part of a miniature paper-cut tableau, a red diamond of glitter pours from the neck of a decapitated chicken. The two pieces, For Every Sadako and A Ritual, respectively, use paper crafts to reference folk tales and explore dimension. In their show "Residual," Teruko Nimura and Katy Horan continue this exploration, on different scales and to different effect, but both speaking to traces of the past that disrupt the present.

Nimura refers to Sadako Sasaki in the title of the previously mentioned sculpture. A young victim of America's bombing of Hiroshima who died 10 years after the bombing at the age of 12 because of radiation exposure, Sasaki had a goal of creating a thousand paper cranes before death that she may, as the tale goes, be granted a wish. Nimura's other sculptures also refer to American acts of violence inflicted upon the Japanese, most overtly in her rendering of a Japanese concentration camp in miniature Block 45 at Tule Lake, a platform with long paper buildings filled with petals.

Most stirring, though, is the installation Shadow Screen. A silk scrim undulates softly in front of back-lit paper cutout figures whose shapes shift into and out of focus as the scrim sways closer and then further away. This glimmering recognition is most evocative of a haunting, a presence whose identity can't quite be placed but whose effect is undeniable.

Horan pulls from the traditions of Appalachia's granny witches, depicting recurring characters, including the two sallow-faced women sacrificing a glitter-blooded chicken over a fire. In her works, with notable few exceptions, shrouded old women are shown in flattened planes of gouache or watercolor paint. Horan's use of glitter in her pieces reminds that the origin of "glamour" can be found in a Scottish word, gramarye, for female powers of enchantment that would trick the eyes of the bewitched – fitting, as much of Horan's use of glitter is found pouring from her subjects' eyes. Also fitting is the provenance of many of the cult traditions the Appalachian granny witches: Scottish and Irish traditions of magic and gramarye.

The hauntings evoked here are ripples through time, the half-lives of trauma and unspeakable violence, inherited rites and superstitions. Horan's flat paper-cut and painted characters are brought into three dimensions by employing the same mediums in different technique. Three lumpy papier-mâché witches occupy the room, the most captivating, The Ghost Eye, with a glittering orb in the right sunken eye socket.

Nimura also brings the medium of paper into a third dimension, with the implied substance of the shifting paper silhouettes in Shadow Screen and the precise and regimented origami folds elsewhere. By injecting the characteristically flat medium with an animating force, the artists evoke the nagging dynamism of their subject matter by the very form of their work.