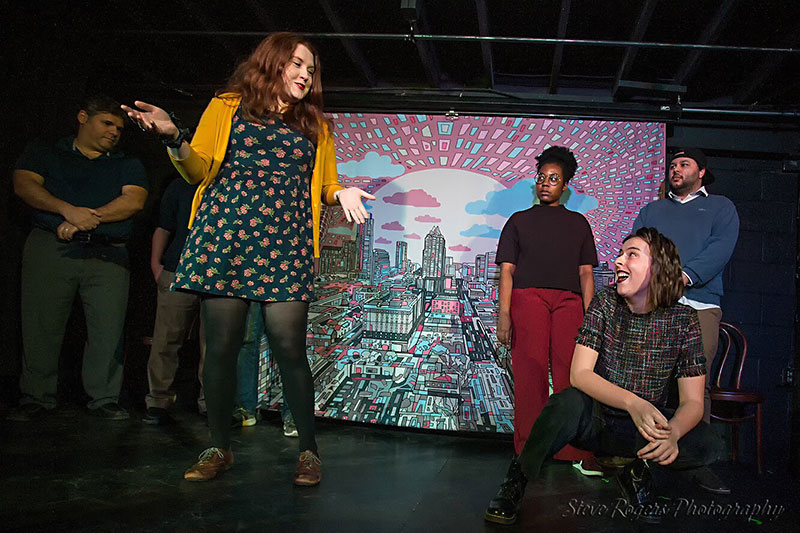 So would begin my own Craigslist "Missed Connection" ad, from which ColdTowne Theater's improvisers draw their inspiration for Missed Connections ATX. If you've never seen this section, I urge you to stop reading now, hop online, and see for yourself the myriad messages from one passing Austinite ship to another – ranging from tame to risqué to flat-out raunchy ("I could almost see your pussy lips through your blue thong" is a sentence I never thought I'd write in a theatrical review, but here we are).

After a sold-out run in 2017, the talented team returns to build an entire improv show around actual ads from the site. To kick things off, the entire cast (Dave Buckman, Kelly Campbell, Shane Gannaway, Tyler Groce, Ronnita Miller, Frank Sanchez, Nathan Sowell, and Katie Stone) base rapid-fire scenes from the first actual ad of the evening – most of which ramble, barely coherently, about things they saw or things they'd do to the intended recipient, and often make the audience cringe and groan at the fact humans like this actually exist. The cast fully commits, of course, and "yes, and" their way through several more improv exercises throughout the evening, often looking to the audience for inspiration for setting and theme. Unfortunately (oh, let's face it, fortunately) my suggestion of "First-Wave Emo Pop" as the genre for the musical finale went unheard.

My personal favorite section of the show saw four players involved in a sort of "improv-telephone" scene. Three were sent away, and the remaining player (Ronnita Miller on this night) was read yet another actual ad and was tasked with conveying it in its entirety to the next player (Gannaway), using absolutely no words (sounds and gibberish allowed). Gannaway, after watching the scene, had to verbally describe the scene to Buckman, who then had to act it out again (no words) for Stone, who was ultimately tasked with explaining the ad she'd seen to the audience. The actual ad was from a man wondering if a woman at Home Depot had purposely flashed him (see above re: blue thong) in the parking lot. It ended as a man not helping a woman change a tire "because he was obviously a feminist," as Stone said (in one of the sharpest quips of a night filled with them). Another scene of note saw a brother and sister on a Megabus, incorporating lines from an ad I'm pretty sure was supposed to be from Satan. The actual Satan. Online dating truly is a strange thing.

Missed Connections ATX is as hilarious as it is oddly cathartic to the single folks in the crowd. There's a certain "There but for the grace of God" quality to the whole affair.

Appreciators of good improv and comedy alike may find much to enjoy on a Saturday night at ColdTowne. And in the spirit of the evening: To the woman seated next to me who gave me a beer during the show and mentioned that everyone usually hangs out and smokes cigarettes afterward: As a reviewer, I usually take off immediately to subjectively stew on what I've just seen; otherwise, I'm sure I'd have joined you.