It's not just about twisting balloons into dog shapes, you know

When most people think of balloon artists, they imagine entertainers at children's birthday parties bending balloons into animals, hats, and swords. But one couple, Stacy "Pineapple" Wheeler and Nate "The Great" Culpepper – two of about three dozen serious Austin-based balloon artists – are proving that their craft goes way beyond kids' shit.

"Balloon art has been stigmatized for so long in the sense that if you say you're a balloon artist, people act like you don't have a real job," says Wheeler. "But I've met a lot of professionals doing it full-time and making crazy stuff, like Guido Verhoef, who does these builds in Dubai that cost a minimum of $50,000."

By documenting the processes and delving into the anecdotes of Wheeler, who has become a respected balloon dressmaker since beginning a year ago, and Culpepper, a custom builder and decorator for the past 16 years in Austin, "Snapshot" discovered a buoyant art scene which, despite flying somewhat under the radar, inflates creative egos in the most constructive ways possible the world over. 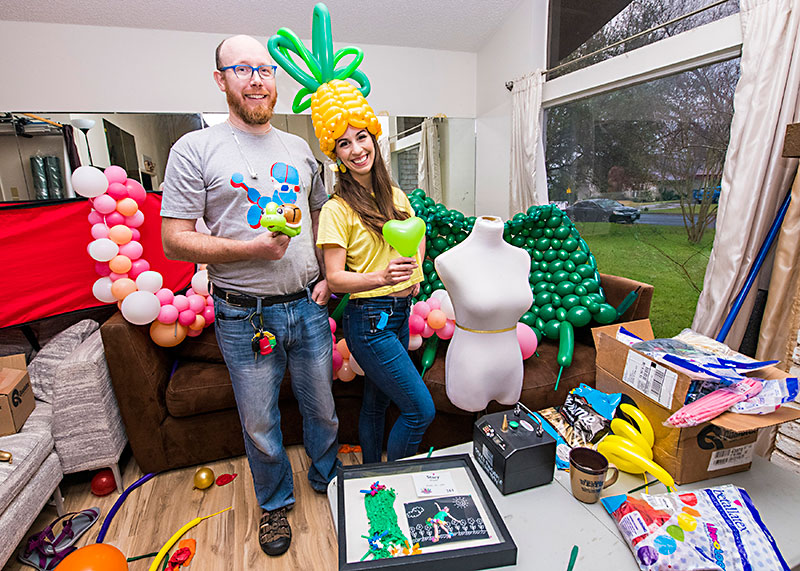 From their North Austin studio home, Wheeler (r) explains how Culpepper "created" her: "He saved me in his phone as 'Pineapple' because he couldn't remember my name and I'd sent him a picture of an upside-down pineapple cake – his favorite," she recalls. "I became his second 'twister,' which usually refers to entertaining at birthday parties, and then stuck with the name because it's easy to brand and has great SEO." 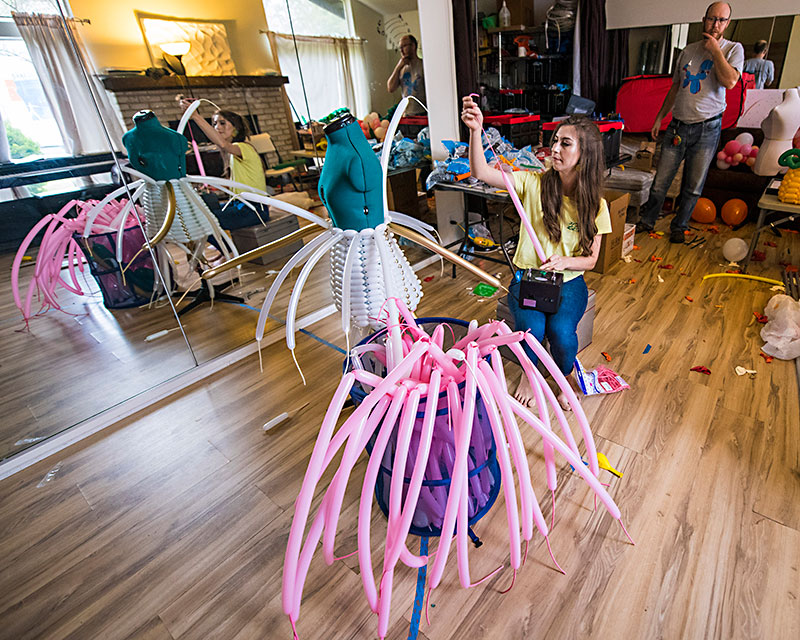 Wheeler on why she takes balloon art seriously: "When I was younger, I was always wearing crazy costumes to parties, so making something outlandish to wear was a natural complement to my personality," says Wheeler, who spends about 20 hours weekly building balloon dresses/decorations on top of her full-time legal assistant gig for Google. "It's also about self-care – I feel so happy and empowered when I'm actually doing creative stuff and getting recognized for it." 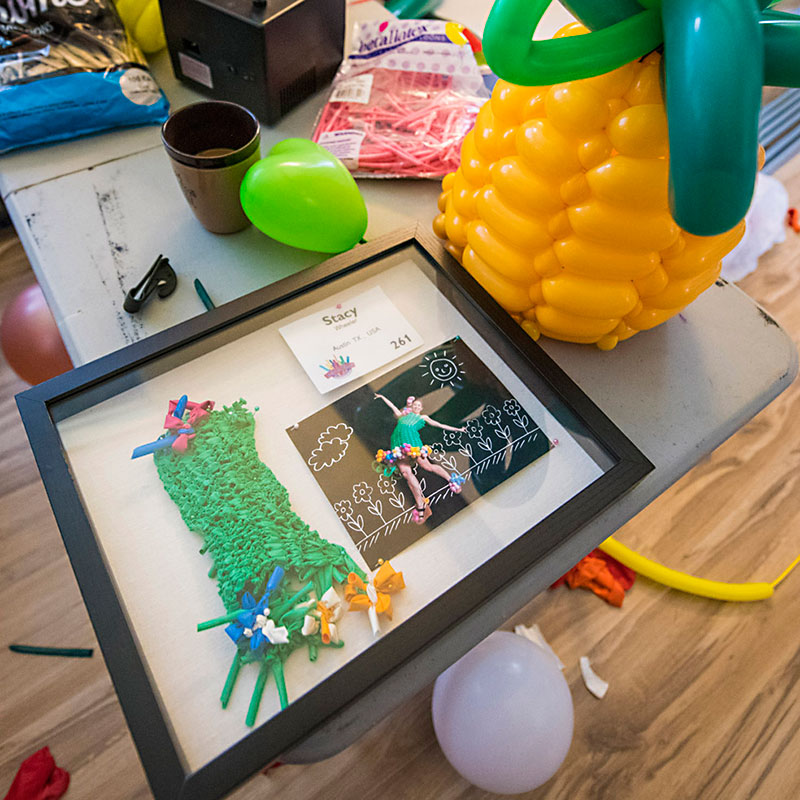 The first balloon dress by Pineapple deflated and framed for posterity, which was made for competition with zero prior experience at the 2017 Twist & Shout Balloon Convention, the largest U.S. balloon art gathering: "I didn't know anything or anybody ... and everybody gave me so much positive feedback and company while I worked," she recalls. "We call the balloon community a 'family,' kind of like the Burners, because a lot of us are real weirdos, so this is where you can just be yourself and nobody will judge you. You have to abide by that if you want to be a part of it." 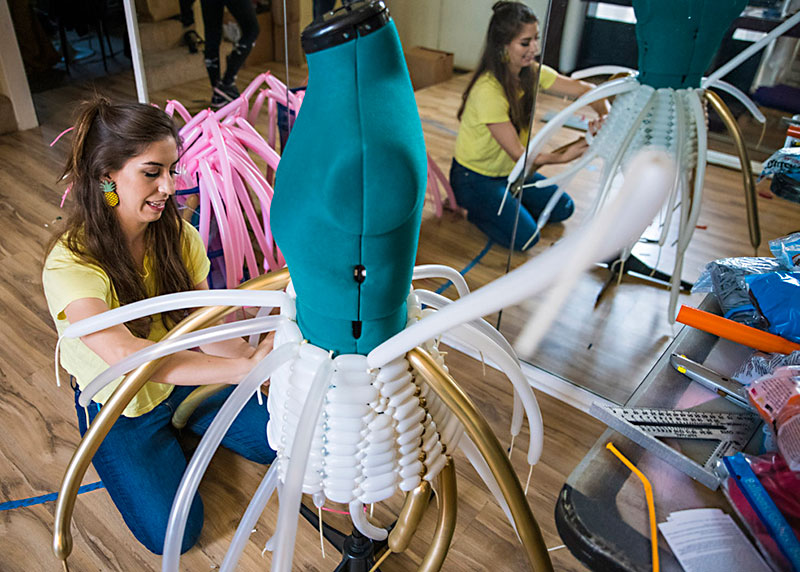 Wheeler discusses accepting the fleeting nature of her art while building a dress comprised of 56 balloons: "I always struggle with living in the moment – I'm a planner, I like to risk-evaluate, I always wanna know what's five years down the line, so it also keeps me tied to 'now,' and I like that," says Wheeler. Adds Culpepper: "I'm the opposite ... almost 100 percent in the moment. It's here right now, brings people joy, and then it's gone, and you go and do the next thing," which works out, Wheeler says, because "I made something awesome, tore it down, and now there's space to make more awesome stuff." 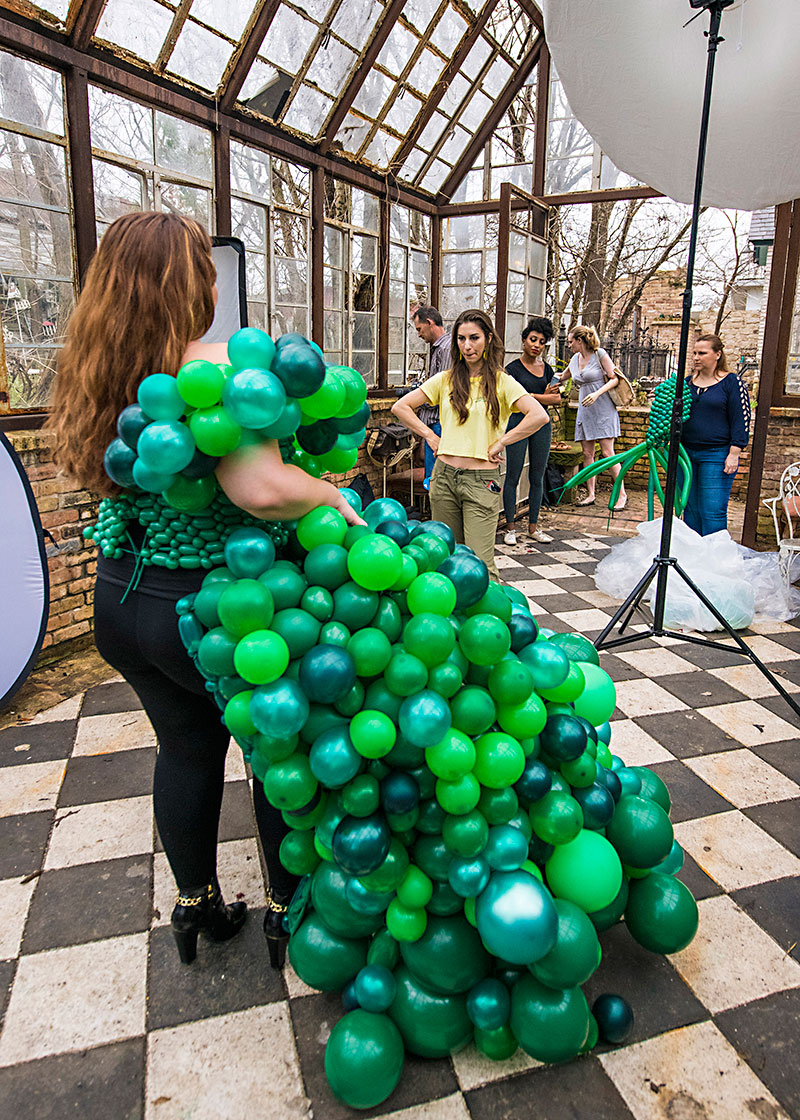 Tegan Stanford (l), 18, models one of Wheeler's dresses during a Sunday morning shoot at Sekrit Theater. "Balloons sound like they'll be silly, but they have the capability to become something elegant and beautiful," says Stanford. "Stacy's also never worked with a plus-size model like me, so it also became a body positivity thing. If you can achieve it with balloons, you can do it with regular fabrics, too." 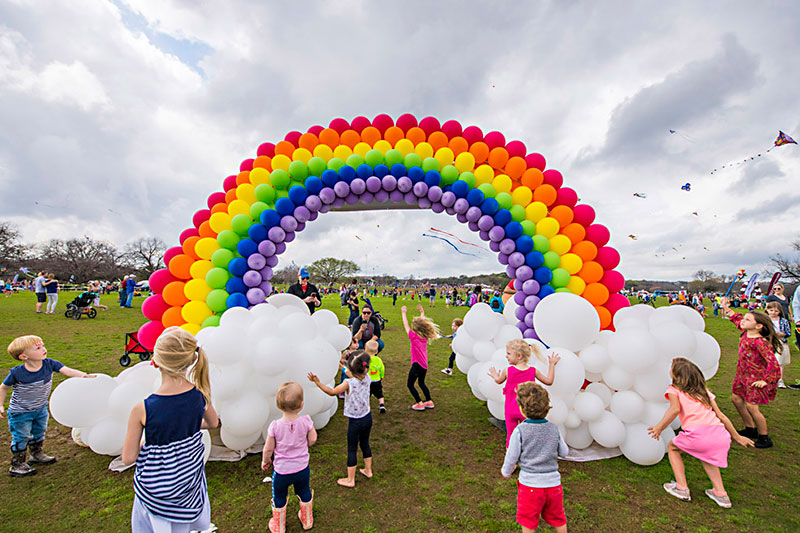 Kids at Zilker Park during Sunday's ABC Kite Festival swarm a custom rainbow-and-clouds arch built by Culpepper and Wheeler. The design took 275 balloons and six hours to construct. For Wheeler, such collaborations with her successful significant other have advanced her skill set, but she sees a long road to mastery ahead: "Balloons are wonky and I don't totally understand them yet," she admits. "There are physics I still need to learn ... but becoming a balloon badass is the goal."