When is it right to spare the life of someone who tried to kill you?

What may sound like a theoretical question from a freshman ethics class has taken up lots of space in the real world lately what with the news surrounding Kent Whitaker. He petitioned the state's Board of Pardons and Paroles to commute the death sentence of his son Thomas, who instigated a plot to murder his parents and his brother 15 years earlier. Though Kent Whitaker lost his wife and other son in the attack and was himself shot in the chest, he pled for clemency on the grounds that the execution of Thomas – now the only surviving member of his family – would only compound his grief. This man had wrestled with the above question in a profoundly personal way and found an answer of forgiveness and mercy.

Whitaker's story may add an unexpected resonance to the latest effort from LOLA – Local Opera Local Artists – in its run this week at Austin Scottish Rite Theater. In La Clemenza di Tito: A Retelling, the Roman emperor of the title faces the same question after a close friend tries to assassinate him. Is it right for Tito to pardon his frenemy?

LOLA's creative team didn't expect anything this timely when they programmed Mozart's last opera. (Trivia note: Mozart was offered the commission only after his rival Salieri passed on it.) The impetus to mount Tito came from the score, which caught the ear of Artistic Producer Rebecca Herman while working on a scene at Des Moines Metro Opera. "I was struck by how great the music was and wanted to spend more time getting into both the music and what the opera had to offer dramatically," she says.

With LOLA having just done an original work (accent on original), the dance/opera/art song pastiche We Might Be Struck by Lightning, diving back into the mainstream made box-office sense. "La Clemenza di Tito isn't done as often as some of Mozart's other operas, but it's still Mozart and I felt that would have some pull," says Herman. Still, LOLA's never been about producing the standard repertoire in standard ways – it made its name, after all, with La Femme Bohème, a reimagining of Puccini with his Paris bohemians all played by women, and distilled Carmen down for three singers – so it wouldn't pour just another shot of Tito.

She doesn't appear in the opera, though she's key to the story. She's Tito's lover and would be his queen, only the Roman people aren't keen to have a queen from Judea on the throne (cf. Cleopatra), and she's sent packing to Jerusalem so Tito can choose a nice Roman bride. And from that act springs the intrigues of the plot, with Vitellia angling to get the rose from Tito and when she doesn't, urging her lover Sesto to whack his pal Tito out of spite.

Once she and executive producer/primo mezzo Liz Cass decided to do Tito, Herman says "the question of how we were going to shorten it/cut it/present it became paramount. I think one of the reasons Tito doesn't get performed as often as other Mozart operas is the libretto is just not as strong. One gets bogged down in long recitatives with complicated political machinations that are hard to follow even with supertitles." Someone suggested she add a narrator to streamline the storytelling, but Herman wasn't sure how to fit one into Tito.

Then, in researching the life of Titus, the historical emperor on whom Tito was based, Herman learned about the actual Berenice, daughter of Herod Agrippa and widow of his brother, Herod of Chalcis. She struck Herman as an ideal narrator for this retelling: "I liked the idea of framing the opera through the eyes of a woman and an outsider." The fact that Titus died shortly after the events of the opera led Herman to the idea of opening the story at Tito's funeral. "From there, Berenice, the woman who loved Tito, comes forward to tell the audience the story and clarify what happened so we don't make the same mistakes they did."

"For Berenice, telling the story is an act of cleansing," says Rebecca Whitehurst, who collaborated on We Might Be Struck by Lightning and was tapped to pen Berenice's lines. She found it crucial to root them in personal need. "There's great risk in writing a character whose primary purpose is to narrate the story. I tried instead to tell the story through character, making Berenice active – to create a character that doesn't narrate the story but rather lives its arc." She considers Berenice in this Tito transformative. "When you change the storyteller, the story rises anew. It was invigorating to help create this new storyteller – especially as she is an emigrant and a woman."

But Berenice serves yet another purpose in LOLA's production: articulating the hard questions about mercy and leadership that, in Herman's eyes, weren't addressed in the original libretto. "On the surface, it's a nice idea that if our leaders were merciful and forgiving, everything would be better and everyone could live in harmony. But really, Sesto attempted to assassinate the emperor. Do we want to say actions don't have consequences? Not to mention that Tito is pardoning his friend and confidant. Are friends of powerful leaders held to a different letter of the law than the rest of the populace?

"This is not to say that Tito's desire to be a good leader is wrong. It's just that he is an idealist who wants to please everyone and in doing so pleases no one and weakens his government by ignoring the laws. We're left asking, what does a good leader look like? While a leader can be good, I'm not sure a leader can always be kind. In our retelling, Tito pays the price for being too lenient with his friends, plunging the capital into unrest and chaos. Instead of a simplistic morality tale of black and white, I wanted to show a complex story dealing with humans and the messy gray world we inhabit."

A version of this article appeared in print on March 2, 2018 with the headline: Mercy Mercy Me 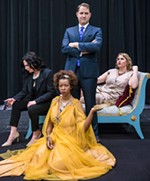 LOLA's La Clemenza di Tito: A Retelling
The quality of mercy is never not strained in this new adaptation of Mozart's late opera