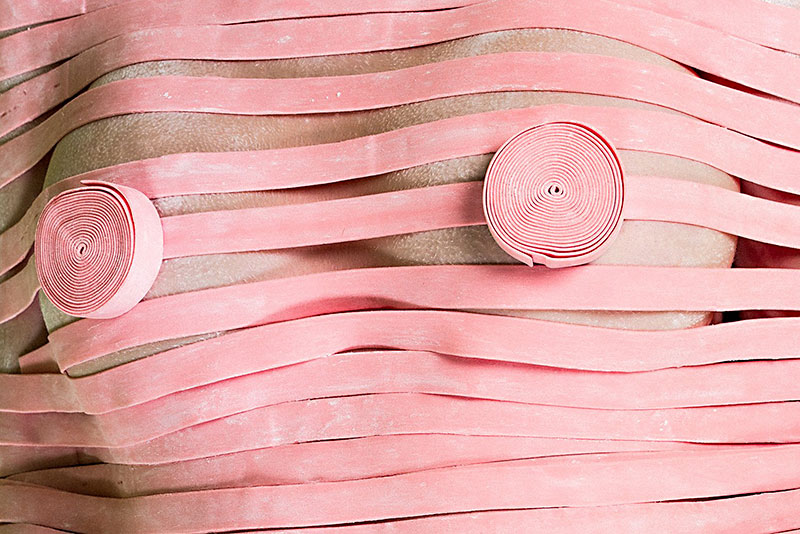 "The female nude is part of a revered tradition, although she is not to take authority over depictions of her nudity. She is just to be available," Carolee Schneemann told The Guardian in a 2014 profile, a half-century after the divisive release of her most-known work Meat Joy, a revelry of flesh. "18+" at Recspec Gallery gathers 23 women and nonbinary artists to author depictions of, mostly, nudity, if not necessarily their own. The show promises a look at "bodies, eroticism, and sexuality," and comes with a disclaimer: "May Contain Explicit Content."

Explicit in its older meaning of unambiguous or open does not wholly apply to the show, which, while it does contain renderings of the nude body, requires some work on the part of the viewer. Flesh is in abundance but often shrouded by gimmick, morphing scale, simplified lines, or a fantastic disruption. There are, in other words, some kinks in the road that preclude a straightforward presentation.

This invitation to engage rouses a ludic connection between viewer and artwork executed delightfully in interactive sculptures like Christa Blackwood's genius Valise Boys 3, a film portrait of a boy barely visible through a peephole in an alligator suitcase, positioned just so as to require kneeling to peer in, and Beth Schindler and Lex Vaughn's gamification of butt stuff, appropriately titled Butt Stuff. (A gloved-hands treasure dive into a pillowy pair of cheeks with points-based rewards.)

More frequently throughout the show, an invitation to intimacy is extended in the form of smallish illustrations and drawings that demand a closer look, to notice the gentle graphite rendering of gargantuan figures in Mattie Hinkley's leashed Modern Lovers or the pinpoint nipples and belly buttons on Lindsay Anne Watson's billowy figures floating in a melted sorbet sky.

Larger and in between Watson and Hinkley's pieces are Joanne Leah's photographs, which exquisitely touch the edge of sexual grotesqueries. Sugar Smell shows a torso, stippled with visible pores and dusted with the powdery fallout of the Hubba Bubba rolls of gum that circle the chest and obscure a pair of breasts in a merging of Hannah Wilke portraiture and bondage imagery.

The gathering of one or two pieces from so many artists has the effect of a peep show, a recurring thrill at the flourishes of so many minds tackling a theme. Many of the names will be familiar to regulars of Austin's local art offerings, but, as with most group shows of this size, I left with a list of artists to look up, several from out of state, a spark only just initiated. Medieval Latin texts commonly concluded with the word "explicit" meaning, most literally, "the book is unrolled," a sort of "The End." Moving throughout "18+" is not so conclusive – there is no consummation here, only the initial sparks of small, repeated peeps – perhaps the inverse "incipit" or "here begins ..." would be more appropriate.