The play presents dementia from the sufferer’s perspective, but it suffers from a shortage of emotions besides exasperation 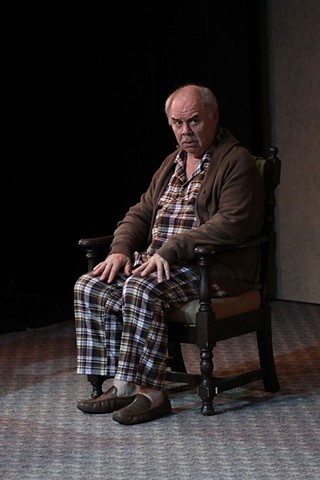 David Jarrott as Andre in The Father (Photo by Steve Williams)

So often artistic explorations of dementia are delivered from the perspective of the caregiver or the witness. It makes sense, but it focuses the audience's sympathies on those outside the experience rather than on the one living it.

Florian Zeller's play The Father makes a different choice, telling the story of a man's decline from inside his confusion. It's actually not as devastating as it might be, given the topic. It's more intellectual and artistic in the way it explores the experience of losing one's hold on reality. The first scene shows a daughter, Anne, doing a poor job of keeping her patience as she explains to her father Andre that he can't keep making things so miserable for his at-home aides that they quit, because she's moving from Paris to London soon for a relationship and she needs to know he's safe in his own apartment. The very next scene shows Andre talking to a man who says he's Anne's husband and that they're in Anne's Paris apartment, not Andre's. It's an effective way of making the audience share Andre's frustration and disorientation, and it continues for the whole play. We never know what's really going on.

The essential Frenchness of the play is undeniable. There is food. There is sexy kissing. There is existential crisis with shades of Sartre. There are domineering males and long-suffering but unruffled females. There is longing for a nice vacation. Ah, Paris!

In this staging by Jarrott Productions, the set from Desiderio Roybal is clever as it deconstructs. Colleen PowerGriffin's costumes contribute to the sense of never knowing how all the pieces fit together.

Director Rick Roemer has gathered a capable cast to tell the story, including David Jarrott as Andre and Amber Quick as Anne. The pace of the short script often drags, though. Andre's dementia aggravates everyone, and their nonverbal frustration takes up a lot of time and space.

What's missing from too much of the production is any sign of Anne's love or affection for her father, as conflicted as it might ever have been. There are glimmers during his more coherent moments, when they simply talk and laugh together, but the shortage of any emotion besides exasperation keeps the show from being as successful as it might be.