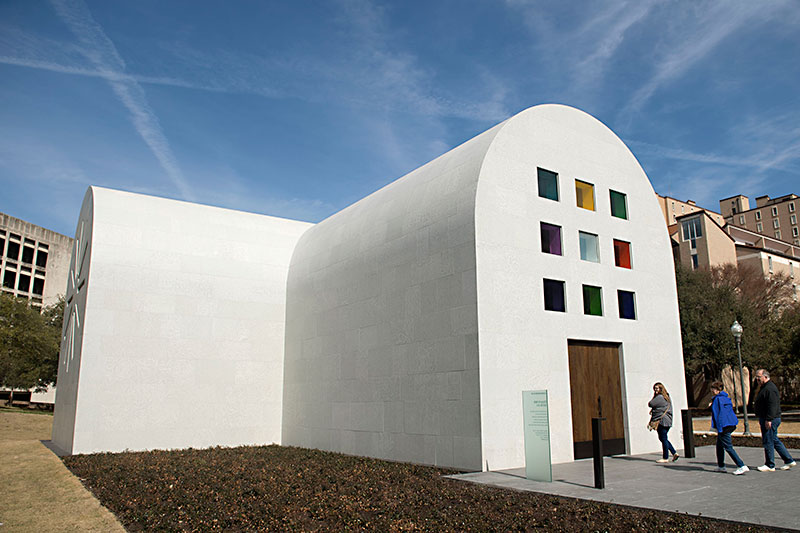 Ellsworth Kelly made a building.

Well, Ellsworth Kelly made plans for a building. And at the time he made them – that would be 1986 – the building wound up not being made. But the idea of the building didn't leave Kelly when that happened, and for three decades, while this eminence of the art world continued to make the abstract paintings, sculptures, and prints that had earned him worldwide recognition, models of the building sat in his studio. This was the first and only such structure Kelly designed, and it was as if something in him held fast to the idea that someday, somewhere, his building would be made.

And so it would be. The someday turned out to be the 2010s, the somewhere Austin – thus, the completed 2,715-square-foot structure bears the city's name – and the Blanton Museum of Art the entity responsible for Kelly's building getting made. Beginning this weekend, the public will be able to visit the University of Texas campus and see the work, and perhaps it will see what made the artist so intent on seeing it realized, too.

That allure may not be apparent at first glance. On its patch of greenspace just north of the plaza that connects the Blanton's exhibition and administrative buildings, Kelly's Austin comes across as modest, subdued. Surrounded by taller structures – Jester Center, the Perry-Castañeda Library, the Sanchez Building, and the Blanton buildings – Austin seems almost petite, an outbuilding among edifices, with its pale gray exterior adding an almost insubstantial quality, as if it's the ghost of a building.

So many threads of Kelly’s creative life are woven together in his building.

The closer you get, though, the more the work reveals itself, through exquisite artistry and meticulous craftsmanship. Those outer walls, made of limestone quarried in Spain, are textured with faint blue stains and squiggles that animate the structure's surface. Its simple crosslike design – an echo of the Romanesque chapels that fascinated Kelly when he was living in France after World War II – shows an elegant balance, especially under the graceful arc of its vaults. The color on the three facades with windows comes into prominence, making the building more alive and inviting, particularly on the south facade where doors made of live oak wood (harvested from trees that once stood on the site of the Dell Medical School) establish a warm, organic entryway to this stone structure.

And once you're inside, it's as if you've stepped inside Kelly's head. Here are works representing areas of art that the artist spent his seven-decade career investigating. Lining the walls are 14 marble panels of pure black and white that play the two off each other in assorted configurations and compositions: side by side, one atop the other, both at diagonals. Although originally inspired by the Stations of the Cross in Christian churches, this series is actually a study in artistic relationships at their most primal: basic geometric shapes in juxtapositions of extreme contrast, lacking even the variety of color. To walk through them all is to walk through Kelly's mind as he experiments with the fundamentals of his art.

Look up, and you'll see the same artistic exploration playing out in the sets of windows. All study the relationships of color through arrangements of basic geometric shapes: above the entrance, squares in a tic-tac-toe grid; on the east end, squares tilted at various angles to outline an abstracted sun; on the west end, long, thin rectangles set in a circle to form a starburst. In the two circular forms, Kelly creates true color wheels, the clockwise progression from yellow to red to purple to blue to green pulling the eye around and around. And the clear window he sets in the grid's center suggests a prism splitting "white" light into a rainbow of hues. Together, the windows represent a lifetime of studying that spectrum.

But Kelly did more than investigate color and shapes in two dimensions. He also worked with objects in space, as the 18-foot-tall redwood column in the building's apse attests. It belongs to a series of Kelly-made "totems," towering vertical blocks with slightly curved sides that follow the arc of a gigantic phantom circle. (The curves on Austin's totem describe part of a circle with a 3,079-inch radius.) Having a totem in the building connects a concrete object within its walls to an invisible abstract shape able to pass through those walls and encompass an expanse of the world outside, as well as the internal world where mathematics live.

So many threads of Kelly's creative life come together in his building, and that by itself might have been enough to make it worth constructing. But this project wasn't simply for revisiting his past explorations in art. Kelly was intent on pushing himself to make new discoveries with it. This was, after all, his first foray into architecture, into designing an entire space and all that went into it. He made a point of working with materials he hadn't used before – glass for the windows, marble for the panels – and though he turned 90 when the Blanton took on the project, Kelly took painstaking care with every detail of the building's construction and fabrication: selecting the building site and its precise orientation (its axis aligned with that of the Texas State Capitol just down Congress Avenue), specifying mouthblown glass for the windows (supplied by Franz Mayer of Munich, a studio in business for 170 years), obtaining the panels' white marble from the very Italian quarry where Michelangelo acquired his.

Of all the materials that Kelly worked with in Austin, the most significant is time. He was keenly aware of the way that light would shift over the course of a day and of a year, and he relished the idea of it casting colors into the space and moving them across walls and floor as the sun progressed across the sky. Time would create an ever-changing experience of Austin and its art.

Kelly himself ran out of time before the building was finished: He died in December 2015, just days after the 92-year-old artist sent Blanton Director Simone Wicha his approval of the final details on the building. It makes Austin not only Kelly's final work of art, but also the summation of his career and its pinnacle. That said, the active space Kelly left in Austin makes the late artist feel very much alive. The sight of those vibrant colored shapes gliding through it, brushing against totem, panels, walls, and floor, is like seeing Ellsworth Kelly himself moving through the space he wanted to be "a place of calm and light," still touching his art, in the building he finally made.