Getting a Read on the State of Anti-State Bookstores 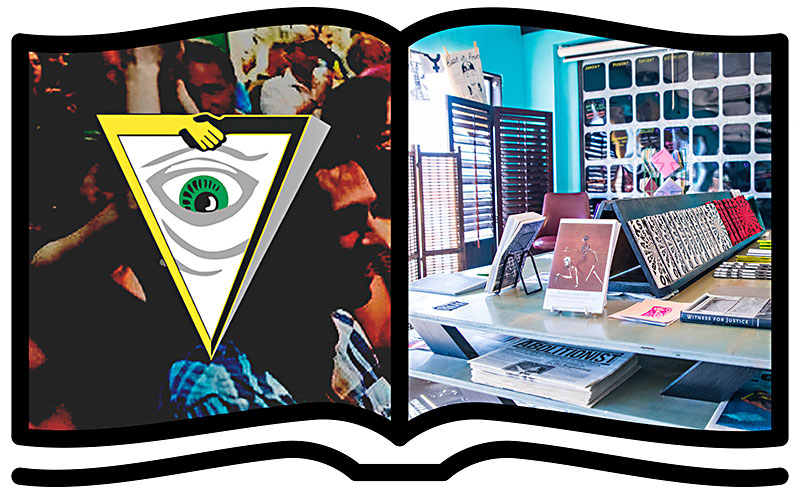 Around the turn of the century, Slacker-era Austin was on its way out. The city saw "yuppies infiltrate the habitat of punk rockers" (according to The New York Times), and the tech boom – and the displacement that came with it – started turning its cogs. Out of this soil sprang two bookstores, different yet similar enough in their radical approach for the uninitiated to confuse them.

Monkeywrench Books and Brave New Books are loosely linked by an affiliation to anarchism, a term the layperson may see as shorthand for an absence of government but that falls short of explaining what both stores actually believe. "We're stranger than that," says Ian, a Monkeywrench volunteer using a pseudonym for fear of alt-right doxxing. Both stores are anti-state, placing emphasis on ways of thinking outside the mainstream, wanting to "shake the Etch A Sketch" of the social order (Ian again).

"The only thing that is maybe in common is a sort of, 'Oh yeah, the state sucks,'" says Ian. "You can't really place [anarchy] usefully on the left and right spectrum."

Both stores are anti-state, placing emphasis on ways of thinking outside the mainstream, wanting to “shake the Etch A Sketch” of the social order.

Anarchy as a counterculture ideology underwent a national resurgence in the late Nineties, emerging in a form against war, capitalism, and globalism. At that time, a new era of oppression (which anarchism also rails against) was dawning in Austin as developers began snatching up cheap space in a big land rush, and the switch from hippie hamlet to hipster hype-city was drastic enough for the Gray Lady to comment on. The anarchist scene that arose here in response was never as prominent as, say, the music scene, but it did send delegates to the WTO protests in the Battle of Seattle. And punk, part of Austin's music scene since the 1970s, embraced Nineties anarcho-culture. Two of Monkeywrench's early members were part of Antischism, a crust punk band later known as Initial State.

Before the bookstores' conception, Austin was primed for the democratization of media through local public access TV, microradio stations, and FringeWare, a predecessor to Brave New Books and Monkeywrench and "an embodiment of the lawlessness of the early internet, anarchy both in terms of intellectual chaos but also focusing on the individual and eschewing a sort of content gatekeeping seen in other bookstores," says bibliophile and Odd Things Considered author Anita Dalton.

That free media wasn't unique to Austin then, but it did manifest differently here. Dalton didn't know anyone who tuned in to specific public-access TV shows in other places the way they did in Austin. "The distinction here is that people took such media seriously," she says. "There wasn't an elitist presumption that such media was confined to public access cable/Xerox-published zines/local watering holes because it was inferior or not ready for prime time."

Monkeywrench, the elder of the two, opened in 2002, as a descendant of Wooden Shoe, a similar bookstore in Philadelphia, and Free Radio Austin, a microradio station that was prosecuted for its theft of government-owned air time. The store was also influenced by the era's "infoshop" anarchist, punk, and zine movements. Zines were a fit with the do-it-yourself ethos of punk, which was in turn a fast friend to the autonomous anarchist vision. Then more than now, punk was a gateway to anarchism, and before going brick-and-mortar, Monkeywrench existed as a table selling zines at local punk shows. In time, it raised money for a space to be a community center, and it's been run by a volunteer collective for the entirety of its 15-year existence, no small feat for an enterprise with a general anti-capitalist view – "general" because the politics of the shop is continuously in flux, dictated by members with different belief systems that apply a critical lens to dominant ideology. Instead of straightforward feminism, for example, their offerings focus on queer feminism. Instead of race ally literature, they offer Afro-pessimism literature. This creates a living ideology in the store that evolves with new insight and the publication of new zines.

The same year Monkeywrench moved into its North Loop home, John Bush became involved in activism. An Austin native, he'd been watching Alex Jones on public access for "years and years" and was pulled into the political sphere when Jones, also an Austin son, began espousing 9/11 truthism on his popular show. Four years later, Bush was among the first to join a community of conspiracy at Brave New Books, opened to provide alternative views of history and current events. The store is upfront about using "conspiracy" to describe its beliefs, which include government-involved false flag terrorism, 9/11 truthism, and efforts to combat global, totalitarian, and dictatorial governments. Libertarianism, the shop's most easily referenced ideology, delves into anarchism as it approaches an embrace of free market and stateless society.

The store has since embraced survivalism, homeschooling, natural health products like CBD and Kratom (which have allowed the store to turn a profit), and family yoga – all things, with the exception of yoga, that embrace autonomy or liberty, if you will. The shop and Bush, who currently runs it, no longer support Jones and, in fact, resent the association that cost the shop a space at Spider House Cafe after its Guadalupe store closed. As Bush now sees, a physical shop helps to engage an activist community in ways an online store cannot.

As much as they differ in ideology, both shops share antagonists with centrist thought, which in Austin is a "sort of hippie, peaceful, love-one-another, please-recycle sort of liberalism," says Dalton.

The "anti-establishment establishment" is what Bush calls the contingent here that goes against the grain but only to a point, still toeing the Democratic party line and still looking to the state for solutions. Asa, another Monkeywrench member using a pseudonym, jokes that it is a "militant centrist position" – one that has the privilege to not be radicalized by circumstance.

Where to move from that easily digested liberalism seems to be a point of privilege.

"I think it's in large part due to property and the protection of property," says Bush of the libertarian movement and its whiteness – a whiteness that characterizes Austin liberalism as well. "I do know that it's been easier for Caucasians to succeed in this country than African-Americans, for example, so I think that's why a lot of African-Americans are focused on, 'I don't want to see my neighbors get beat up by the cops'" rather than private property rights.

And in the other corner:

"It's also a class divide," says Asa. "I feel there are people who've lived in this world who are against it because of the life they've lived. This world has attacked you from the day that you were born: With displacement in Austin, those folks get pushed out. The people who have lived a life that allows them to operate in this world comfortably haven't been radicalized in any way, in my opinion, and live a life of 'I'm really comfortable and I read Reddit, so I get it.'"

"Funny story," Bush says. He once went to Monkeywrench to purchase a gag gift – The Communist Manifesto – for Brave New Books founder Harlan Dietrich and was told the shop didn't have it. Monkeywrench doesn't carry party line books.

He was tickled and says he chatted with a volunteer instead. "Oh yeah, the state sucks" and all that.

A version of this article appeared in print on February 9, 2018 with the headline: A Tale of Two Bookstores