Despite the title of this three-dance program, the arms may have had the most to say 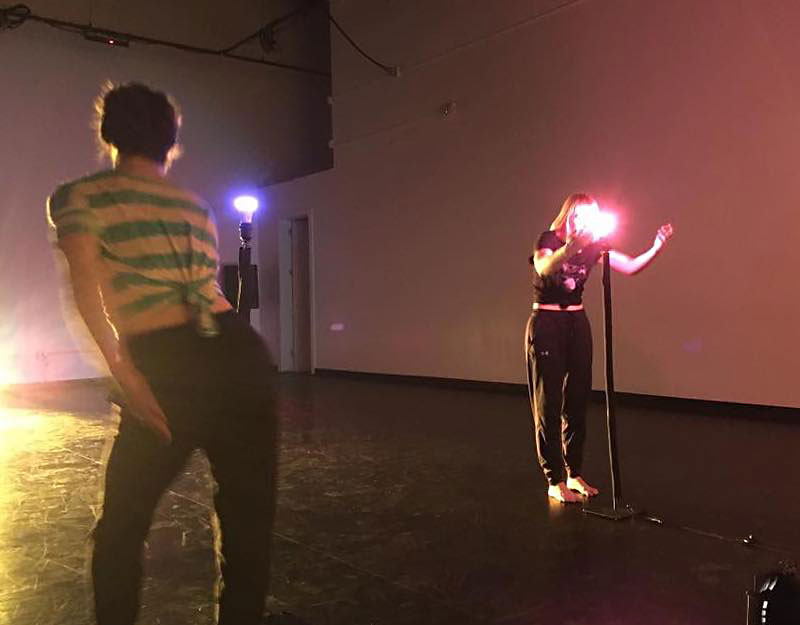 Arms encircling the bulb of a standing lamp. An upraised arm at the end of which is a hand spasmodically stiffening and curling into a claw. Arms extended with hands grasping for something that isn't there. Arms outstretched that rise up to reach for the sky.

The name of the program was Backbone, but the arms had much to say in this evening of three new dances presented by the indie company Ready|Set|Go! They expressed an attraction to something that they could not possess, a sense of being possessed by something that was out of one's control, a feeling of having had something taken away and trying to get it back, and ultimately, a determination to reclaim one's self.

That isn't to say that a lot wasn't being said by the feet, legs, backs, and faces of the show's four performers – the steps, springs, spins, turns, tilts, and leaps executed with those parts of their bodies spoke volumes – but in my view, the arms appeared most often to be making pivotal comments, expressions that provided clarity about or insight into the movement that was taking place around it.

For instance, "Flicker.Burn.Repeat," choreographed by Emily Rushing and Carissa Topham, featured two dancers, Rushing and Lisa Kobdish, who seemed transfixed by two standing lamps at one end of the studio. They would walk up to the lights, stare at them, then back away from them and dance, but their repeated attention to the lamps left the impression that they might be performing for these sources of light, which would sometimes change color as the dancers interacted with them. Whether the lamps represented ambition or a goal that ambition spurred the dancers to pursue, as suggested by a note in the program, wasn't clear, but when the dancers put their arms out in a circle around the bare bulbs, as if to embrace the light, and then withdrew their arms without doing so, you could feel a yearning for some thing that these women could not possess and yet could not stop trying to get. For much of the piece, Rushing and Kobdish moved in unison, and the synchronization they achieved was striking, in no small part because they almost never acknowledged each other. Each stayed mesmerized by one of the lamps, which fostered the idea of two people moving on parallel paths without seeming to realize it.

In contrast, Rosalyn Nasky was all alone in "Pod," a dance she also choreographed, and that isolation came to suggest vulnerability to an unseen threat. What began with a strange undulation of her torso took on a more unsettling feeling when Nasky raised her arm and watched with fascination as her hand tensed and her rigid fingers bent over into an animal-like claw. You could easily imagine some alien creature nesting under her skin and taking control of her – not much of a reach if you associate the word "pod" with Invasion of the Body Snatchers. And as if that and the atmospheric lighting by Brigette Hutchison wasn't enough to cement the sense of dread, Nasky repeatedly tried to glance over her shoulder only to have a menacing sound jerk her face forward again. Something was there with her, and it might be best left unseen.

Katherine Hodges' "Rework. Rediscover.Rebuild," choreographed in collaboration with Rushing, also began with a dancer alone: On film, Rushing made her way through a wooded area, moving branches aside with her hands and touching parts of her body almost as if swatting at insects. When the film ended, and she appeared onstage, making the same gestures but without the woods around her, her movements suggested absence, loss. Then Hodges danced her own solo to recorded text with lines like, "I let myself become so small, tiny, inconsequential." But her outstretched arms carving through the air spoke to a rejection of that insignificance. She was not on a mission to make herself large again, to make herself matter. And when those arms arced skyward, her recovery, her rebuilding of her self, felt complete. She looked as if she could reach the sun – and not coincidentally, that act required backbone.