The prints by this renowned Texas artist are like portals to other worlds, revealing rapturous visions and terrifying cosmic disturbances 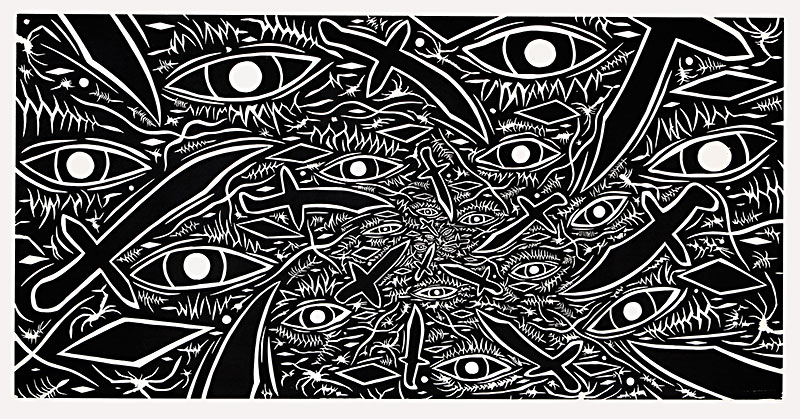 Through It All by James Surls

A fellow University of Houston student remembered one mid-1970s class with James Surls in a conversation with the Houston Chronicle: "We all looked up one day to find James Surls walking in the door with a chain saw." Calling him a shaman, the artist recalled Surls transforming a fallen tree into a snarling dog. Precisely this clever energy is wrought in Surls' prints, an enigmatic rupture and a spiritual construction, a collection of which are on display at Flatbed Press.

Best known for his sculptures, creations that look like they sprang from the ground of some alternative universe's Texas, familiar themes and motifs take on a new essence when shifted from three dimensions to two. In his prints, Surls is still preoccupied with the cosmic and fantastic figures, and the actual process of relief printing is not far removed from the sculptures Surls makes. Both are a careful extraction of an image from a chunk of material, but without the wood and steel that anchor the sculptures in some way to this world, the prints feel more alien.

The iconography is otherworldly, but more than that, the prints are often the portal themselves to the other worlds. They frequently show a terrifying cosmic disturbance, a fissure between worlds, plunging from or into a vortex. This point of momentum suits the nature of images, thrusting rapturous visions into our awareness or else sucking them away, but it also serves as a point of balance for the repetitive symbols that fill Surls' prints. The works seem to depict life, but not in any familiar form. Many remind me of Old Testament cherubim, which is to say absolutely terrifying portals of divine energy with no clear face or multiple faces, hands tucked here and there, beings completely covered in eyes (turn with me to Ezekiel 10).

Early relief prints are deceptively simplistic in their shape. Flower and Again in Crystal Clear, two of the earliest pieces on display, are both linoleum reliefs from 1988. They are similar in their portrayals of repetitive shapes circling a central point: dotted petals in the former, thornlike barbs in the latter. Though less intricate in their design than some of the later pieces, these early prints show a deft handling of the medium, all clean transfers and crisp lines, and the roots of a persistent visual vocabulary.

It's not often that an ongoing career is so expansive and treasured as to offer what Through It All does. A woodcut print that takes up an entire wall, the relief was carved in 1988 and the print on display was pressed in 2010. The resulting image, a black field infested with white eyes and blades circling a drain in the middle, is bold and mesmerizing. It is emblematic of the show at Flatbed and Surls' career more broadly, an impressive bridge between some of his most formative years in Splendora, Texas, just north of Houston, and those in his current home in Colorado. 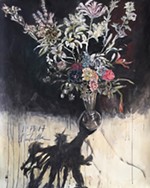 "Spencer Fidler: Vasculum" at Flatbed
This solo show reveals the artist's daily practice of preservation of craft and creativity