The five women showing photographs capture the beauty, passion, grace, and resilience of being a woman in Austin today 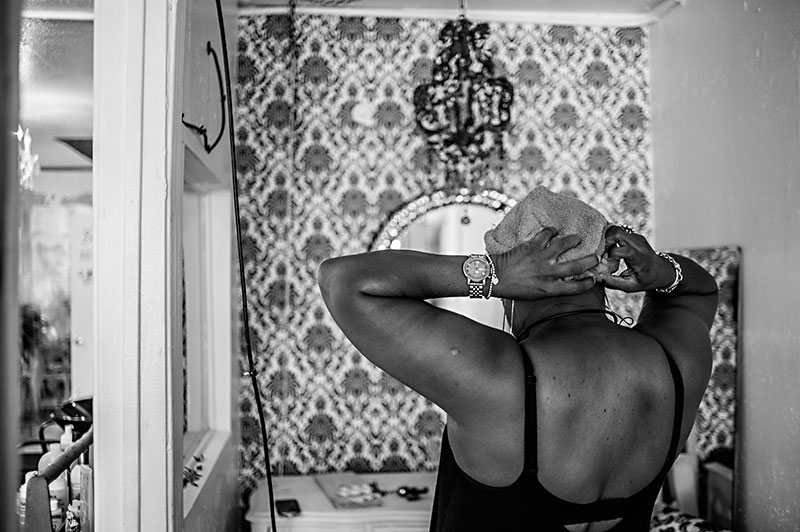 From the Portraits of a Changing Economy series by Amalia Díaz

In the corner gallery of the Elisabet Ney Museum, once home to the eponymous Ney, herself an Austin woman and artist, the first FotoATX presents a show featuring Austin women as both subject and artist. "Austin Women by Austin Women" explores what being a woman in modern Austin looks like. Photographers Ave Bonar, Amalia Díaz, Christa Blackwood, Hannah Neal, and Erica Wilkins display technical proficiency across the spectrum of the medium, offering everything from digital portraiture to ethereal bromoil prints to photogravures.

Neal and Blackwood inject a sense of mythology into the Austin woman. Neal uses early 20th century Pictorialistic techniques and processes to capture local artists as glamorous characters in a hazy atmosphere. The bromoil prints beguile viewers with soft focus and dramatic lighting, allowing the atmosphere and textures of her images to develop in turn an airy and then a sumptuous presence. Pulling from her Left Bank series, Neal pays tribute to the history of photography and artistry writ large in her stylized rendering of poised artists and dancers.

For her part, Blackwood presents the Austin woman dissected. Her two sets of images, one composed of four tintypes in sharp-contrast black and white and another of three lovely encaustic photogravures in a softer pink gradient, are distinct but stylistically characteristic of Blackwood and her exploration of gender, here anatomized in close crops of her subjects.

Wilkins contributes photographs from her series And Feminist, which bills itself as "a neutral, nonconfrontational collection of environmental portraits that humanizes the label." The project endeavors to offer a broader visual presentation of what feminists may look like and simultaneously identify as. While it is personally more difficult to conceptualize a project being at once neutral, nonconfrontational, and feminist than a person being at once a "Human, Texan, and Feminist" or "Shop Owner, Mother, and Feminist," per the titles, anyone struggling with the latter set is appeased by the warm, smiling portraits.

Circling the show counterclockwise leaves the best for last. Díaz's four digital photographs peek into the rituals of women around Austin and how the changing landscape of the city has affected these rituals. The images themselves are thoughtfully composed and beautifully rendered in black and white: a stone-faced woman sitting arms crossed in the beauty chair; the back of a woman, her hands up adjusting a towel around her hair; a barista gazing out of the frame; a mother in profile, nestling her baby close to her. As the images suggest and the program confirms, the wistful nature of the images reflects somber realities. The stories are familiar to some degree – the disappearance of a black-owned beauty parlor, the barista who left Austin for California, the family who lost their home in the Cactus Rose Mobile Home Park to condo development – but the resilient vulnerability Díaz captures in the women's faces and posture is extraordinary.

If the show feels at times a bit disjointed or even slightly embarrassing, well, that is part of being a woman in Austin, Texas. But so, too, is the beauty, passion, creativity, grace, and resilience on display.