Austinites reflect on the continued inspiration of Dr. King's teachings

Tangible validation for one of Dr. Martin Luther King Jr.'s favorite sayings – "the arc of the moral universe is long, but it bends toward justice" – came in the form of hundreds of Austinites who gathered Monday morning to honor that civil rights activist's life and vision, all defiantly hopeful, yet with a unanimous understanding that a just outcome is never guaranteed, but rather dependent upon the persistent work of all humans united despite any perceived differences.

"Snapshot" joined the sprawling ranks as they marched from an assembly at the University of Texas' East Mall (the site of Dr. King's iconic statue) to a rally at the Capitol, then onward to an outdoor celebration at Huston-Tillotson University, all the while documenting instances of and participating in conversations about how people – as individuals, members of a diverse but in many ways still disparate Austin community, and the larger global village – can continue contributing to the achievement of Dr. King's dream. 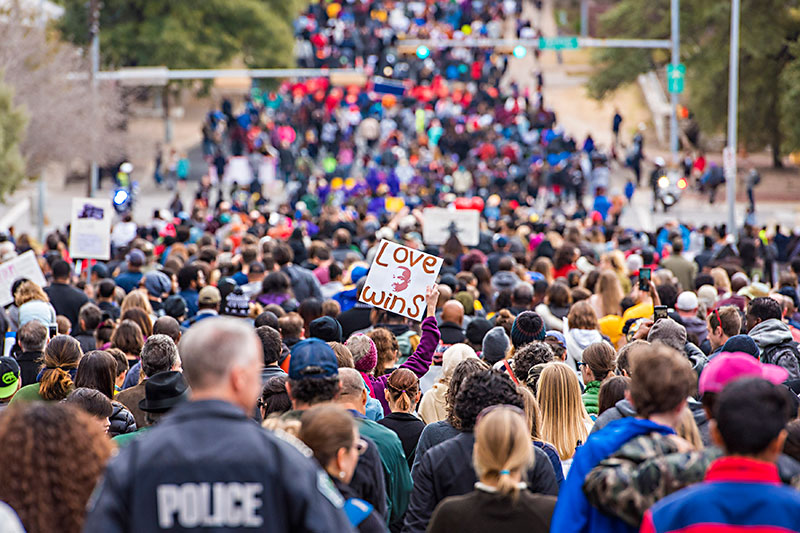 Susan Van Haitsma, 60, bore one of the most striking banners during the march: “[With this sign], I’m thinking of our current administration in this country .... I feel proud of Austin for being a progressive community, standing up for immigrant rights, for example, and trying really hard to work toward economic justice and equality. Is it still a dream? Yes, we have a long way to go. There’s still a lot of segregation here and affordable housing always seems to be very unreachable, but I think Martin Luther King said that even in times when love doesn’t seem to be winning, we have to remember that it will in the end.” 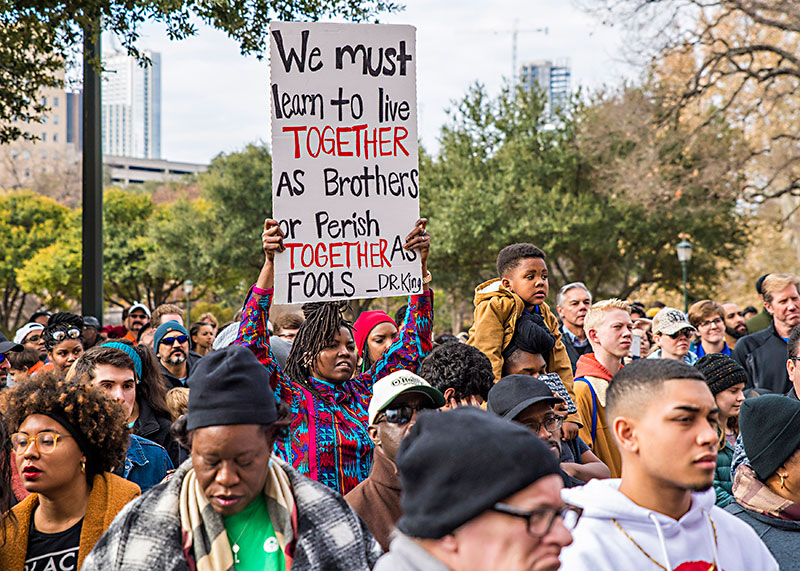 Addressing local issues was the partial aim of QT Preston, 42, an eight-year Austin resident who wielded a sign in front of the Capitol displaying one of her favorite MLK Jr. quotes: “The country has always been divisive and that rings true to me today because some of the problems plaguing citizens in the Fifties – basic civil rights, disproportionate killing by cops – are still happening. In the short amount of time I’ve been [in Austin], I’ve seen overwhelming incidences of gentrification. There’s no protection for people of certain income brackets whose families have been living in sectioned-off areas – the Eastside in particular – for generations. We need a spirit of unity, everybody coming together and finding a humanitarian effort to work on, whether it’s civil rights or helping people being displaced. Everyone has their own battle to fight, and unless we lock arms and join forces [on issues], we’re gonna crumble.” 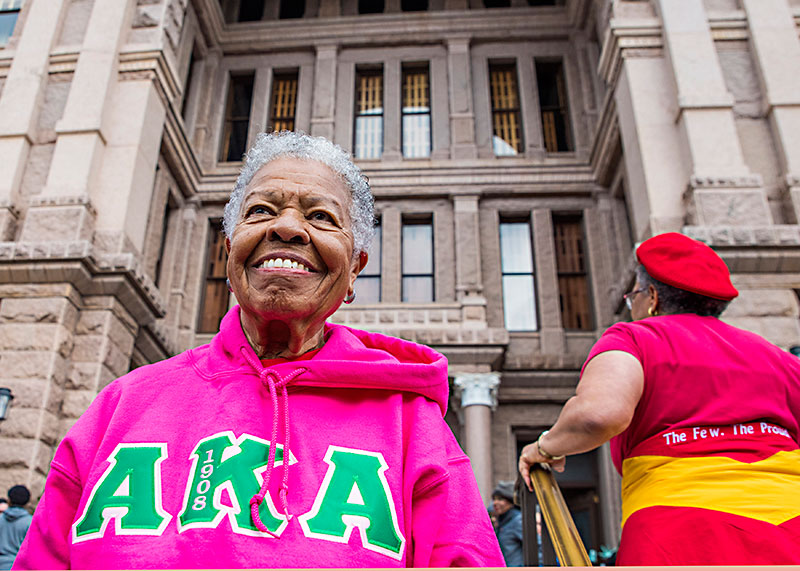 Looking out at the masses from the steps of the Capitol, former state representative and NAACP member Wilhelmina Delco posited her own positive push: “This is the most inspiring thing I’ve ever seen. You can’t see what I see from up here, but this crowd goes all the way to Congress Avenue .... We are determined to speak loud, act strong, and make a difference – Dr. King is watching.” 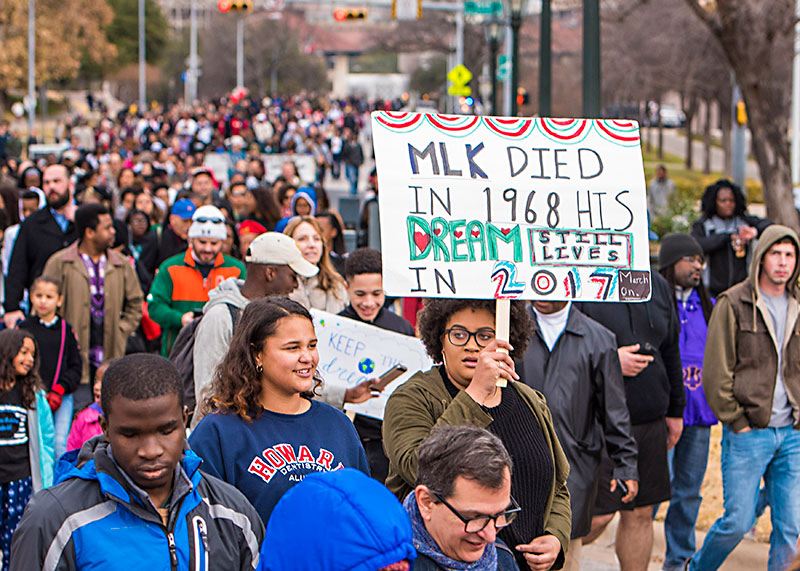 For Maura Mangum, 17, co-founder and president of Cedar Park High School’s Black History Club, establishing such resolve hinges on teaching others about MLK Jr.’s principles: “There are only four black people in our grade ... so we founded the club because we felt like our school needed more diversity and we believe that MLK died for us to be able to do this. There’s a lot of ignorance in the world right now .... His dream can live on through us as we educate ourselves and others about what he believed in and what he taught us, which is ... faith. He never doubted himself, he was always stern about what he did and his word, and there was always power behind it.”

Alex Kilgore, 25, whose wife marching alongside him is a Reagan High School teacher, sees an opportunity to apply Dr. King’s ideals to current sociopolitical controversies: “The DACA legislation is one of the biggest proponents that could further MLK’s dream. It should continue. Not allowing [DREAMers] to seek betterment because of their parents’ illegal immigration isn’t right .... Every child deserves the same treatment.” 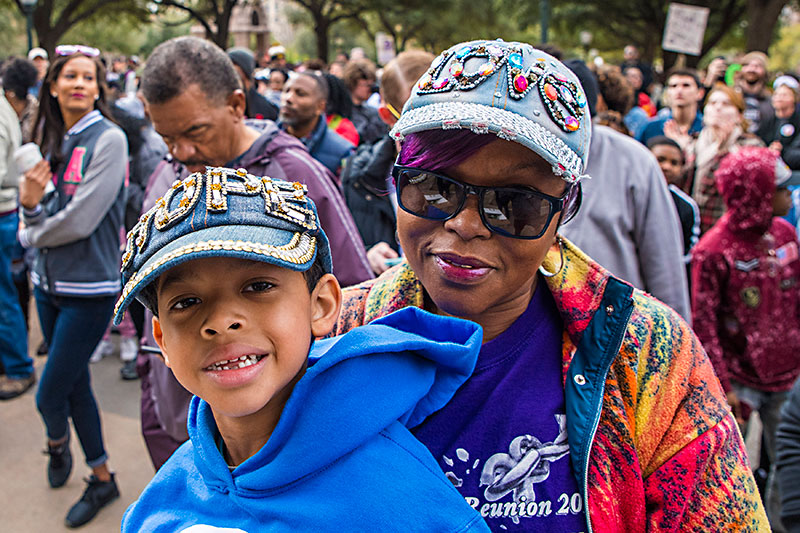 Debra Jackson Samuel, 59, likewise emphasized the importance of impressing a spirit of unity upon local youth like her 5-year-old son, Josiah: “In Austin, we need to continue to come together and to try to bring unity, no matter the cost, no matter the race, creed, culture or skin color. Every single race ... if you cut ’em, they gonna bleed red blood. And we need our kids to know that and experience these events because it’s gonna be left up to them.” 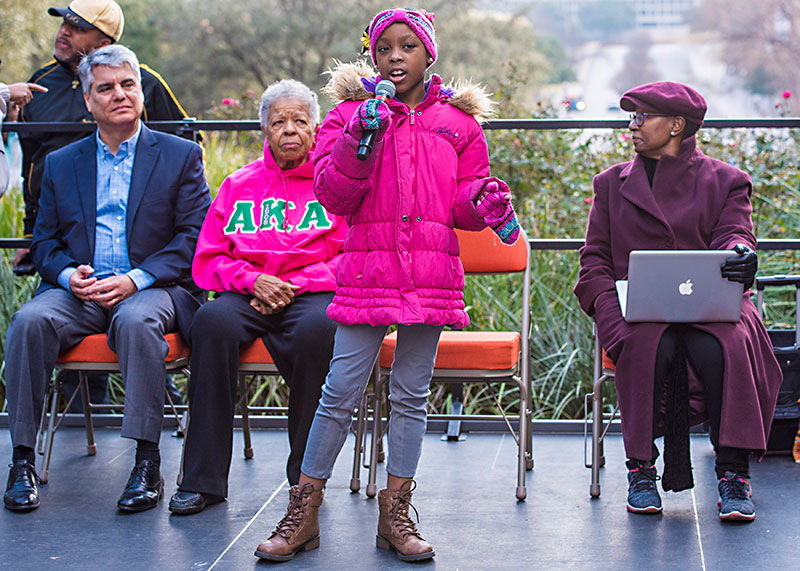 One indication that torch has already been passed to able hands came with a speech to the East Mall crowd by Ashton Lewis, a fifth-grader at Barbara Jordan Early College Prep School who won the annual MLK Oratory Competition: “Dr. Martin Luther King Jr., we, the people of the world, have a problem. What is it, you might ask? It’s violence and drugs, right in my own neighborhood .... I can turn on the TV and hear that leaders of the world are threatening violence toward each others’ countries. I know that we need help to stop all of this, Dr. King. What is happening today is extremely dangerous for all people. ‘It is not the way,’ Dr. King once said. The ultimate tragedy is not the cruelty and oppression by the bad people, but the silence over that by the good people .... It is time for the good people to stand up.”