Orphans! The Improvised Orphan Musical at the Hideout 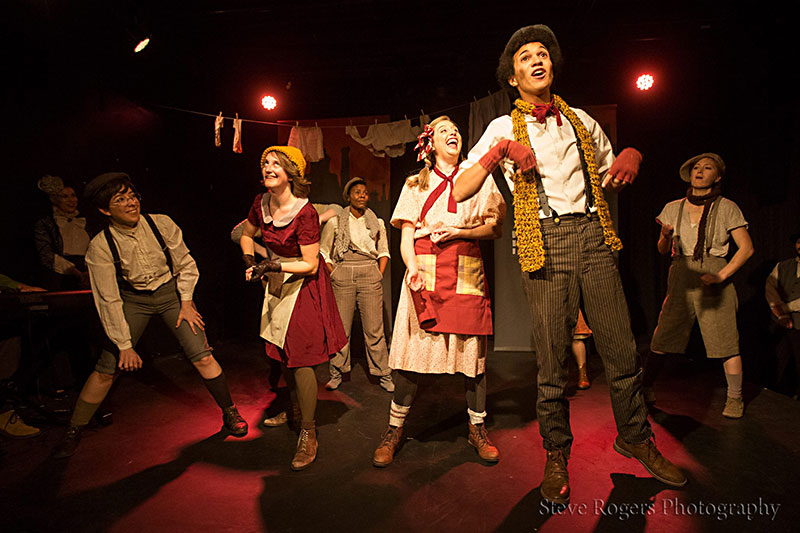 To be honest, things didn't look too good for the kids from the orphanage. I mean, how could a pack of penniless, parentless paupers prevail against the most powerful man in Gotham, the mighty mayor of NYC himself, when he was intent on using all his influence and affluence to put them out on the streets and take away their jobs sweeping them?

But then I recalled all the lessons I'd learned from musicals with orphans in them. As long as these kids held on to their optimism, their pluck, their belief in themselves, and, most importantly, one another, they could take on all o' Manhattan and the other four boroughs, to boot! And sure enough, by the end of the opening night performance of Orphans! The Improvised Orphan Musical, those ragtag ragamuffins had done just that and shown Hizzoner who was boss.

If you've ever imagined you could support yourself picking pockets on the streets of London, ever spit on your palm before you shook hands on a deal, ever made your bed singing "It's a hard knock life," then, Li'l Urchin, this show is meant for you. Co-directors Bridget Brewer and Kaci Beeler have mapped the genomes for Oliver!, Annie, Newsies, and heaven only knows what other shows about scrappy singing street kids and used them to create a whole new slew of musicals in which such waifs face poverty, scorn, and abuse and yet somehow cling to a spark of hope – and a melody! – to get them through it all. The two of them drafted 15 of their colleagues and managed to inject into all of them the genetic materials that these orphan musicals share, so that they can collectively create one of these musicals off the tops of their 17 heads every Saturday night – and, yes, that includes the songs. They improvise musical numbers and choreography as well as characters, storylines, and dialogue, and while the results won't exactly have Lin-Manuel Miranda or Susan Stroman looking over their shoulders, the numbers do boast that song-and-dance verve that adds spark to the spunk of these hard-luck youngsters.

At least that was the case with the first musical improvised by the Orphans! company, one set in New York City at the turn of the 20th century. (The locations change weekly, rotating among New York, Chicago, Paris, and London, and each week the orphans engage in a different occupation: chimney sweeps, guillotine cleaners, pickpockets, and so on.) Here, the orphans found their meager lodging and livelihood sweeping the streets imperiled by the mayor's plan to employ mechanized street cleaners and to build a skyscraper – eight stories! – on the site of the orphanage. With kindly orphanage owners Stanford and Muffy Pennyweather – Rob Yoho and Courtney Hopkin, managing to be both compassionate and pathetic – unable to help, it was up to the orphans to save the day, and you could see they had it in them. Teddy – the tallest, therefore the leader – went to face down the mayor in his lair, and Tyler Groce gave Teddy that classic never-say-die spirit of the orphan alpha. Back at the broom was the group's heart, Millie – "She has a great work ethic!" – and when the chips were down at the end of Act I, she lifted the orphans' spirits with the song "We're Still Here" – an affecting anthem by Bridget Brewer and ace composer/accompanist Ammon Taylor that would've had Orphan Annie herself choked up. Filling out the rest of this determined band were the usual types with the usual nicknames – Hatsy, Freckles, Buttons, et al. – but with every one made lovable and specific by improvisers who clearly understood the material and the group dynamics. Kaci Beeler, Margaret Hunsicker, Katie Dahm, Rachel Creason, Shannon Stott, Mallory Schlossberg, and Marc Jalandoon each contributed something fun and funny to bind the orphans together. And as for their nemesis, the mayor: Leapin' Luthors! Jordan T. Maxwell created a Gilded Age grinch who was deliciously venal and vicious – one who had the bedside manner of Mr. Burns and the plummy baritone of Kelsey Grammer's Sideshow Bob. Abetted by a brightly comic Erin Molson as his dim secretary Eunice and a buffoonish J.R. Zambrano as his rich friend, Virgil Pennybottom III, this was a Machiavel you wanted to see get his comeuppance, just not too soon.

The ending was happy – a John Henry-style competition between the mechanical street cleaners and the orphans was won by the kids (with outstanding sound effects improvised from the booth by Michael Yew) – and the closing number even boasted harmonies (!), but the truth is, this edition of Orphans! was happy throughout – a joyful tribute to those musicals that make you believe the sun'll come out tomorrow. With this show, you can bank on the sun coming out Saturday night, too.