This fully immersive, silent improvised drama is mysterious, creative, and a most worthwhile theatrical experience 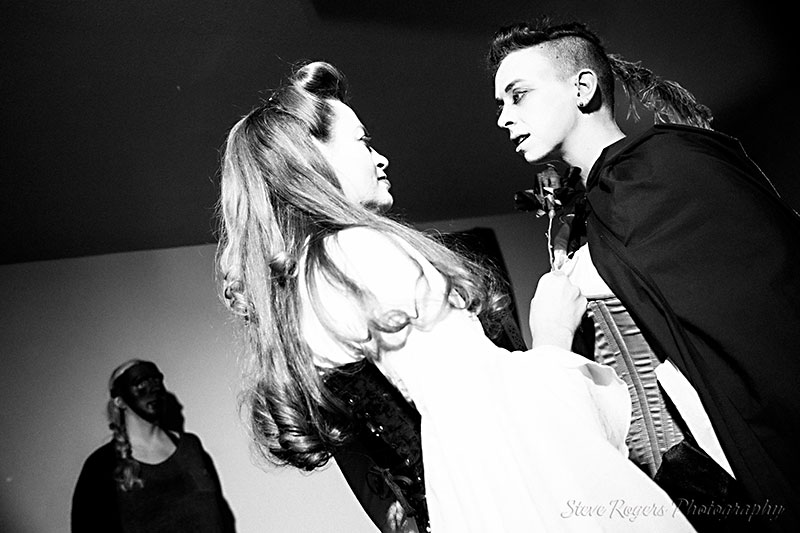 There are no words.

No, literally … there are no words.

I'm still trying to piece together what I saw at Hideout Studios, and this may be exactly what Golden – Improvised Silent Stories intends for audiences of Speak No More, a wordless, fully immersive story of innocence, lust, love, betrayal, and violence. I'm still not sure exactly what I saw – but I do know I enjoyed the hell out of it.

I'm going to attempt to relay as much about Speak No More as I can while saying as little about it as possible – this seems the only fair way to do it and will be easier than it sounds. There is no program for the piece, and very little information exists about it online. I'm tragically unfamiliar with the Austin improv scene (an embarrassment I'll work to change this year), but I can tell you that Golden is comprised of Tyler Lane, Suzanne Link, Marc Majcher, Brandon Martin, Robert Slack, Jessica von Schramm, and Luke Wallens. Having creeped all their Facebook pages, I can tell you that most of them are performers in the show (possibly all of them … many are masked). As Speak No More is an improvised piece based on Shakespearean tragedies, I can only assume the company crafted the narrative as master improvisers.

This is where my factual knowledge ends. It's all experiential from here.

The audience enters the small lobby of Hideout Studios, greeted by a woman dressed in black, with a black mask covering her face. She silently asks you to pick a card – just one. The lighting is dim and macabre, and some rather ominous music plays in the background (indeed, I wish I knew who to thank for this sound design, as it features prominently in the environment). Before we begin, another woman welcomes us and introduces the cast – not by name, but as a whole. Each cast member will have a secret, and their secret will be whatever is on the card we were given (mine was "Thief"), as we are asked to give the card to a cast member. I gave mine to a cast member who already had one, but they all seemed to already have one by the time I made it up to the front, and I wasn't yet 100% sure of the rules. From there, we were asked to don the surgical masks we were given at the door and warned not to speak from that point on, only to observe.

Then, the story begins.

There's really no point in trying to explain the story, as each person's interpretation will likely differ, and it may be different from night to night. It is, however, fascinating to watch. The eight actors (along with several black-masked "security" folk scattered about) fully inhabit their stories, characters, and environment, oblivious to the audience's observation. Several stories and scenes play out simultaneously in different rooms of Hideout Studios, all intricate and mysterious. The entire show takes roughly 40 minutes to complete … but then it starts again, offering the audience a chance to wander to different rooms and catch different aspects of the story. The whole thing repeats twice (a total of three performances) before the night is done … though each cycle has slight differences. Someone who died in the first playthrough may not die in the final one, and so on.

Though it may be either a loving homage to, a blatant rip-off of, or simply taking the piss out of Sleep No More, the internationally acclaimed show by Punchdrunk that provides an immersive version of Macbeth through a film noir lens in a hotel, Speak No More is certainly an interesting, creative, and worthwhile theatrical experience that's had me thinking about it far after its conclusion.