The Murdered Women of Juárez Find a Voice Onstage 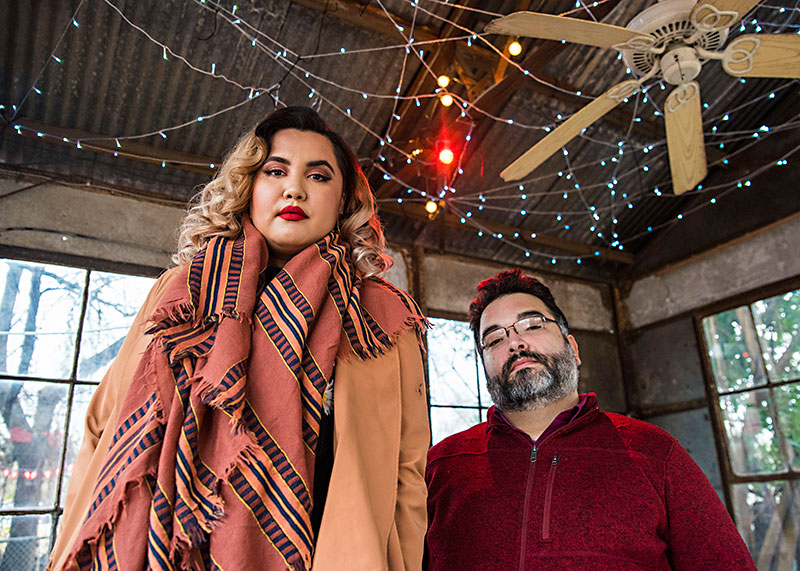 When he first approached her about The Way She Spoke, Karen Rodriguez was more than a little nervous. She and playwright Isaac Gomez were dear friends and frequent collaborators, having become close as undergraduates in the Department of Theatre & Dance at the University of Texas at Austin, but Rodriguez had never tackled a solo piece before. "I distinctly remember saying, 'No, Isaac I can't,'" she recalls. "Jajajaj, I was scared! The fact that I have to portray more than 15 people alone gave me so much pause. I wanted to do it right. It's such an important story."

The story in question is the epidemic of femicides in Ciudad Juárez, the Mexican sister city of El Paso, where Gomez grew up. According to Amnesty International, between 1993 and 2003 more than 370 women and girls in Juárez were victims of murder and sexual assault. While this murder rate for women isn't disproportionately higher than many major American cities, the persistently gendered nature of this violence – often involving torture and sexual mutilation, targeting female factory workers whose jobs necessitate that they ride the bus late at night – has drawn international attention.

Gomez had first tackled the subject matter back when Rodriguez and he were both UT students. With co-playwright Bianca Sul­a­ica, Gomez created The Women of Juár­ez, an ensemble play for 10 Latina actors that charted the lives of those at risk and the grief of the mothers and sisters of the missing. Based on interviews that Gomez personally conducted with Juárez residents affected by the murders, the play debuted as part of UT's student-run Cohen New Works Festival, with Rodriguez playing the part of the dancing spirit called Doña Maria. The short run received overwhelming praise on campus and off, and went on to win the David Mark Cohen New Play Award from the Austin Critics Table.

Many storytellers might have felt their duty discharged there, but Gomez continued to return to the stories of Ciudad Juárez even as he moved away from Texas. As he built a career in Chicago, working with the Goodman Theatre, Victory Gardens Theater, Chicago Dramatists, and Teatro Vista, he found himself developing sister plays, La Ruta and The Way She Spoke. The more he workshopped both pieces, the more it became clear how widely these stories resonated: "The story of the women of Juárez is, unfortunately, not unique to the women there. I mean it is, but it also isn't. Because violence against women is palpable everywhere."

“I made a promise to a mother in Juárez that I will never stop telling her story and the story of her missing daughter until all of this all stops.” – Isaac Gomez, playwright of The Way She Spoke

From the outset, Gomez knew he wanted Rodriguez, who had also moved to Chicago, to be a part of bringing The Way She Spoke to life. Their intimacy informed the shape of the performance itself – the show opens with Rodriguez more or less playing herself, an actor coming in to read a new play, unaware that it is a one-woman show until she picks up the script that has been left onstage. "It's very meta that way," she notes. "When you meet me at the top of the show, I come in how I come in to work in real life – it's messy and fun and completely bare." That sense of vulnerability became a huge part of what made the show's first production, in Chicago's Greenhouse Theater Center, so resonant: "Doing it in Chicago and seeing how deeply it resonated with the Chicago audiences – from the mothers who had lost their children to gun violence to partners having completely different experiences of the show sitting right next to each other and finding revelatory stuff about each other in the aftermath. People, after the performance, touching the transformative scarf that I channel all of the characters with and thanking the women of Juárez for being there. Because, you know, they're there …. It's just … incredible. For lack of better words. The audience, the voices we're conjuring and honoring, the sole actor, all of us in a dance. I guess what I'm trying to say is, the power of collective experience I have never experienced, between actor and audience, as deeply as I have here."

After the critically acclaimed run, Gomez had a clear sense of the play's future. "In my dreamiest of dreams, I would want to take this back to El Paso and Juárez so that the people I spoke with can see what has come from our brief but momentous time together," he says. "But for the safety of the women there and the women performing these plays, it's probably not the best idea. So Austin has always felt like an organic next step. Take this Tejanx play back to Tejanx people." It was simply a question of connecting with the right collaborator.

Austin-based director and associate artistic director for Vortex Repertory Company Rudy Ramirez was interested from the moment Gomez and Rodriguez floated the idea of an Austin production: "I've known Karen and Isaac for a very long time, and it has been amazing hearing about how they have taken Chicago by storm. I knew I wanted to make it happen." The challenges that The Way She Spoke presented were irresistible, as was its relevance. "The breadth of what this play is doing and the tightrope-walk that it undertakes in order to communicate its message is both thrilling and daunting," Ramirez says. "I had to journal about this play like I haven't in a while: It's so easy to do wrong, to miss an important facet of what it's doing. The quote that's been on my mind is actually Alyssa Milano's response to Matt Damon's comments about the 'continuum' of sexual harassment and assault. She said, 'There are different stages of cancer. Some more treatable than others. But it's still cancer.' This play centers around a point where the cancer of patriarchal violence is at its most fatal and malignant, but it asks us to realize that this violence is widespread and takes many forms."

Returning to the play a year after its premiere in a new city with a new director meant shifts for both Gomez and Rodriguez. "There was a lot about the play I still didn't quite know when we premiered it in Chicago," admits Gomez. "Once we sat down and did a first readthrough of that script here in Austin, it sort of all clicked. So I rewrote several moments and Karen's performance has deepened exponentially as well." Rodriguez echoes his sentiments: "It also feels like a deepening for me. And you know, I'm also a very different actor than I was a year and a half ago, precisely because of this show. Because it takes a toll. My body feels it much quicker now, so there's been a lot of hot tea and a lot of soothing music and talking to people I love and a lot of rewatching Bridget Jones's Diary."

In the midst of all this growth and change, two things remain constant: the importance of collaboration and the importance of the story. Rodriguez reflects on her artistic partnership with Gomez: "We are very lucky to have each other, and we thank God every day. We share a brain, in a complementary way. We're both Earth signs, so we're hard on each other, we push each other. The magical thing about Isaac is that he listens. And that affords him a gold mine of truthful human behavior. And the women he writes – they're a dream come true for me. They are me, they are all the women I know." And for Gomez, The Way She Spoke is one more way for him to stay true to his word: "I made a promise to a mother in Juárez that I will never stop telling her story and the story of her missing daughter until all of this all stops. And I'm committed to that, one hundred percent. It's become somewhat of a life's mission of mine. I can never stop. I will never stop."

More About the Women of Juárez

"The Real Housewives of Ciudad Juárez"

"The Anthropology of Femicide in Juarez"

The play Among the Sand and Smog

A version of this article appeared in print on January 12, 2018 with the headline: A Haunting in Ciudad Juárez