The company delivers a powerful and timely account of foreigners making a new home in the U.S. 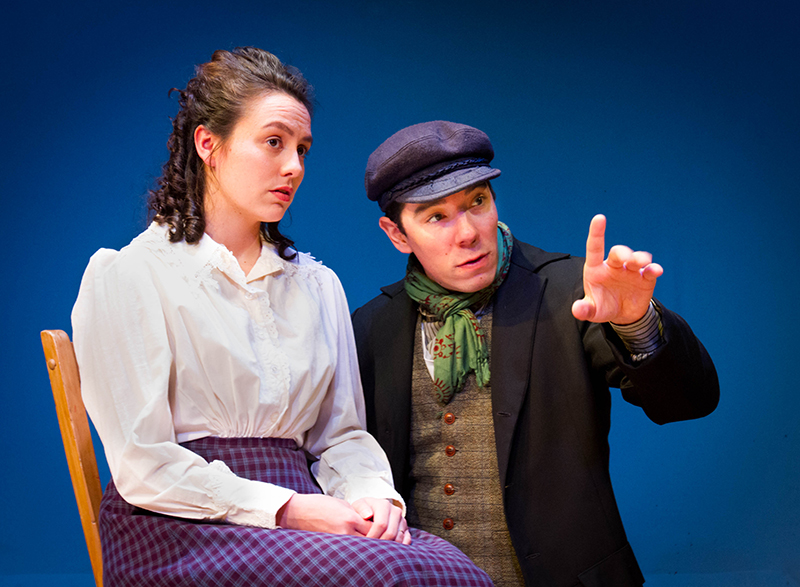 Gone to Texas: Estrella Saldaña (l) and Joseph Garlock in The Immigrant (Photo by Austin Playhouse)

"You picked a great night to come," box office attendant Leigh Fisher mentioned as I arrived at Austin Playhouse. "The Harelik family is in the audience tonight!" Not knowing a scant detail about Mark Harelik's The Immigrant, I didn't realize what an interesting honor that was. As it turns out, I was treated to a moving and powerful play about a factual Texan family, while sitting just a few rows back from several descendants of the characters onstage.

The Immigrant is the story of Haskell Harelik, a Russian Jew who leaves the motherland in the early 1900s for the United States. Eschewing the bigger cities, Haskell arrives in Texas via Galveston and eventually finds himself peddling bananas in the small Central Texas town of Hamilton. If the playwright's IMDb bio is to be believed, the Hare­liks are still the only Jewish family in town more than a century later. Still, ever the entrepreneur, Haskell doesn't let the loneliness or isolation get him down. We watch as Haskell befriends locals Milton and Ima Perry, who help him get on his feet and eventually bring his wife Leah over from Russia. The play deals with the first 30 or so years of the Hareliks' American adventure, with no shortage of conflict around culture, religion, and politics.

Though first published in 1988, the themes of The Immigrant are still relevant today – maybe more so. In the second act, a Sabbath dinner with the Hareliks and the Perrys, shortly before America's entrance into World War II, goes much the way many modern family gatherings have likely gone since November 2016, with Haskell the empathetic liberal wanting what's best for his people, and Milton as your Republican uncle (hey, we've all got one). Still, there is a distinct love shared between the two families, and it shows in superb writing and outstanding performances.

With this being his third outing with the script, Producing Artistic Director Don Toner clearly knows what he wants from the actors and what the characters want from one another. On an elegantly minimal set by Mike Toner, lit by Don Day, the actors sell the environment, plopping us right in the middle of that small Texas town. They get an assist from Joel Mercado-See, whose sound and video design includes slide projections of the actual historical characters and locations splashed full-size against the upstage wall.

As Haskell, Joseph Garlock doesn't have it easy. Roughly one-third of his dialogue in the first act is in Yiddish, as Haskell struggles to learn English. The execution is flawless, as is the slow transition from actual Yiddish to English with a Yiddish accent. Garlock imbues the character with a delightful foreign charm, adopting mannerisms in his voice and body that never approach stereotype. He's really a pleasure to watch, and frankly, the same can be said for the entire cast. Huck Huckaby's Milton is a spot-on depiction of an independent Texan man, with all the charm and bluster that entails. As Leah Harelik, Estrella Saldaña shows she is more than capable of holding a stage with some of Austin's veterans. Saldaña has the same Yiddish-to-English journey as Garlock and handles it just as well. A relatively recent graduate of the UT Department of Theatre & Dance with an already impressive résumé, Saldaña is certainly an actor to keep your eye on in 2018. Cyndi Williams' portrayal of Ima Perry is just fantastic; one part sparkly-eyed true Christian idealist, one part wacky Texan lady you just want to hug. Williams has a moment later in the play that is so raw and vulnerable, you may find yourself welling up where you were laughing moments earlier.

The Immigrant is a cozy, no-frills script, and needn't be anything more to be as powerful as it is. Executed well on all fronts, this production might just be the lesson in forgetting the mistakes of the past this country needs right now. It can certainly teach us a thing or two about how to treat each other.

Austin Playhouse at ACC Highland campus, 6001 Airport, 512/476-0084
www.austinplayhouse.com
Through Jan. 28
Running time: 2 hr.
A version of this article appeared in print on January 12, 2018 with the headline: Coming to America