“The Open Road: Photography and the American Road Trip” at the Blanton 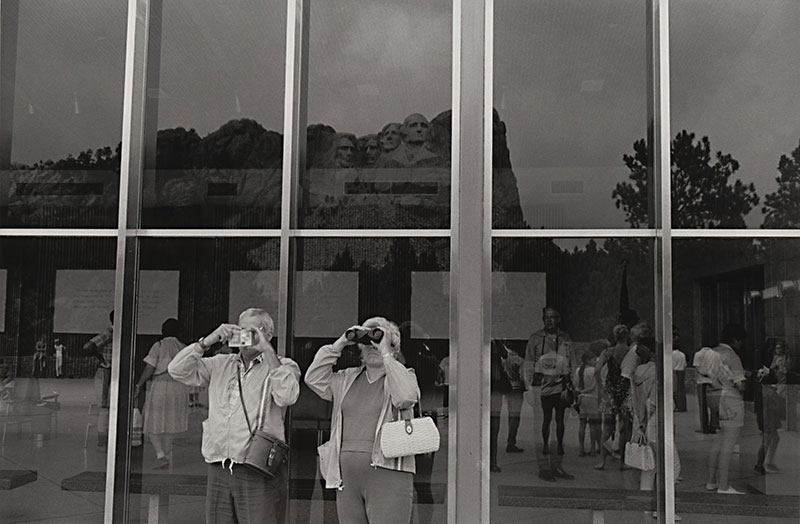 The subject of the photograph, ostensibly, is the statue of the military-looking gent atop the pedestal in the traffic-encircled bit of greenspace at which the lens is aimed. In the print, however, that bronzed luminary occupies a mere fraction of the image's upper right corner and appears more like a toy soldier than a memorialized civic leader. Instead, what consumes almost half the frame – and all our attention – is a car's side mirror in which is seen a sizable chunk of the driver's head leaning out the window, the camera held to his lone visible eye, wide open under a heavily furrowed brow as he works to get the shot. As much as any single image in "The Open Road: Photography and the American Road Trip" – an exhibit as expansive as the country we love to criss-cross by auto – this one by Lee Friedlander sums up our complex relationship with cars and cameras.

How we love to drive, to slide behind the wheel and go, to motor across the length and breadth of this land, from sea to shining sea. Stephen Shore, one of the 19 photographers included in this Aperture Foundation traveling show, has said what "a liberating experience" it was learning to drive: "I could get into a car and have a credit card in my pocket and I could just go – go for days. It was the sense of freedom and independence I loved." It's a sense of freedom and independence, though, that we want a record of – visual proof that we made it to such-and-such a place. So at every opportunity, out comes the camera and click goes the shutter, so we have another document that we were there.

Friedlander's photograph hints at the idea that our presence in the image often means more than whatever it is we're taking a picture of. And the car we're in can mean more, too – it is, after all, the extension of our self, so much so that sometimes we won't even get out of it to snap a shot of something. American road trippers give a whole new meaning to the term "drive-by shooting."

All this isn't to say that Friedlander – or any of his colleagues here – should be confused with such casual shutterbugs. The photo described above is meticulous in its composition and surprisingly crisp given its seemingly offhand execution. This is a photographer using his practiced eye and skill to show us something he's found on the open road, something worth our attention, some reflection of who we are, and that's the case with all of these image-makers. Some chronicle, capturing places and people in specific communities as they find them. Some comment, staging scenes against landscapes they come across or setting text against the images. But all are extremely conscious of where they are and what time it is – that is, the cultural moment: In his photo of a trolley in 1950s New Orleans, Robert Frank shows how clearly the line was drawn between white and black in the pre-civil rights South; in his 1964 shot of tourists holding postcards of the Texas School Book Depository while standing at Dealey Plaza, Garry Winogrand (who taught photography at the University of Texas in the Seventies) shows how quickly the assassination of JFK and all its details had lodged in the American psyche; in her 2012 portrait of a young woman playing the accordion from the tailgate of a truck, Justine Kurland shows us a poster child of the post-Great Recession gig economy; in their pranksterish image of french fries sprouting on the rim of the Grand Canyon, Taiyo Onorato and Nico Krebs show how far our fast-food culture has spread now: right to one of our greatest natural wonders and most beloved road-trip destinations.

Curators David Campany and Denise Wolff have arranged the survey chronologically, so we can see the distinct evolution of road-trip photography in approach and form: from black-and-white to color, from small print to large format, from journalistic to theatrical. Each step along the way makes its own perceptive statement about us and our culture over the past 70 years. You leave it having traveled thousands of miles and seen more than if you'd driven them yourself.

“The Open Road: Photography and the American Road Trip”

A version of this article appeared in print on January 5, 2018 with the headline: Drive and Shoot