One of two things is happening in City The­atre's production of Christmas Belles, penned by playwriting trio Jessie Jones, Nicholas Hope, and Jamie Wooten (collectively known as "Jones Hope Wooten"). Either the cast and director are mostly squandering an opportunity to run full-throttle into the overt tongue-in-cheekiness of a zany, Southern-fried campfest or a talented cast and director (Jessica McMichael) giving everything they have still can't quite overcome a script that mistakes Texan tropes and "charm" for actual wit. I'm genuinely at a loss to tell which. Frankly, it may be either or a little of both from moment to moment, but I lean toward the latter.

Humor is subjective, I get it. Here, the lion's share comes from easy jokes, told almost exclusively through maddeningly repetitive exposition. From the opening scene – one side of a telephone conversation – the entire first half feels like a barrage of "Hey, remember that thing that happened at that time and place and why it was funny," which quickly loses its luster.

The second in a trilogy of plays about the denizens of fictional Fayro, Texas, Christmas Belles centers on the Tabernacle of the Lamb Church and its annual Christmas program, directed this year by Honey Raye Futrelle (Christina Manley) after a 27-year run with Nikki Bora's Geneva Musgrave at the helm. The show feels long, with an overabundance of interwoven plot lines; too many, in fact, to mention in detail. Suffice it to say, one farcical mishap after another occurs, threatening the success of the Christmas program along with the hearts and minds of Fayro's citizenry.

Adding to the disarray are the show's tech elements. City Theatre Artistic Director Andy Berkovsky handles the lighting and scenic design, with a functional up-and-down wash illuminating the stage. The main portion of the set is perfect; Berkovsky has nailed the "back room" of any small Texan town's church, at once a utility room, pantry, closet, workspace, and more. Unfortunately, quite a few of the scenes happen far downstage, set in front of a thin, maroonish-purple curtain, which hangs on a rod suspended between two archways that look almost like medieval stone, which makes them feel tonally out of place. The curtain never closes completely, leaving a foot-wide gap on either side, through which actors and stagehands can be seen setting up the next scene. It's distracting, easily pulling you out of the moment.

Despite these details, there are some saving graces. The play is so long that you can't help eventually becoming invested in some of the characters, and it's nice to see everyone's happy ending. Brent Rose stands out in his earnest portrayal of Raynerd, a rather ... slow fellow. His honesty in the role produces genuine laughs, and though it's easy to see his big moment at the play's crux coming, it's still heartwarming (though lifted straight from A Charlie Brown Christmas). Cassidy Timms does a great job as Gina Jo Dubberly, Honey Raye's niece who is about to be big sister to twins. Beau Paul, as local lawman John Curtis Buntner, rises to the top with a show-stealing moment I won't spoil here.

With clunky dialogue and characters written almost as stereotypes of stereotypes, I can't help but wonder how this show may have gone differently with some different choices. Still, right or wrong, it's good to see strong choices made. And it's only fair to City Theatre to mention that my personal experience was certainly in the minority; the rest of the crowd laughed vigorously throughout, and a rousing round of applause was earned. It's a "Humbug" from me, but others may find a visit to Fayro just the jolt of Christmas cheer they're looking for. 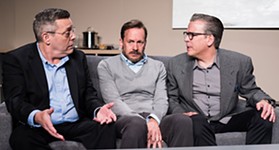 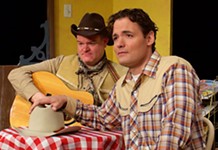