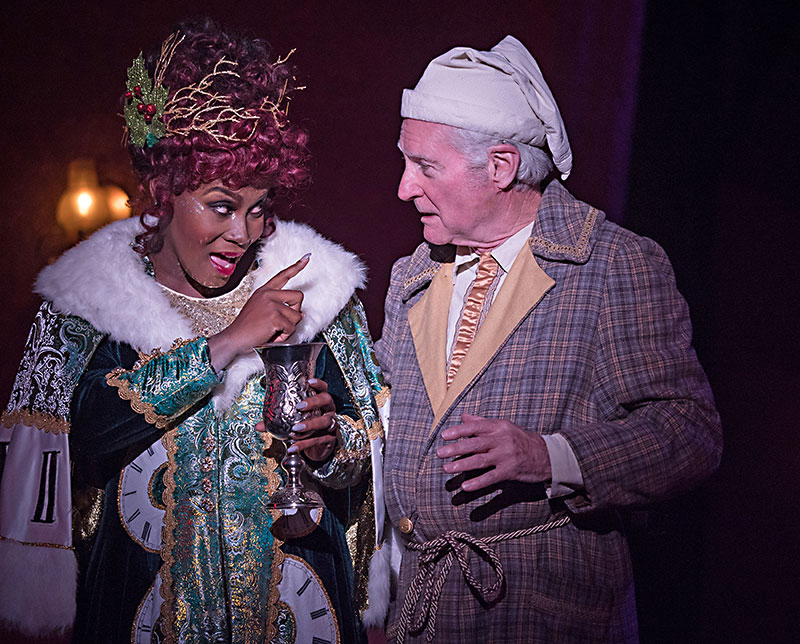 Come fly with me: Chanel’s Ghost of Christmas Present entices Harvey Guion’s Scrooge to get in the yuletide spirit (Photo by Kirk Tuck)

We all know the story of A Christmas Carol – or we should, anyway. Let's not waste space rehashing it here.

Rather, let's talk about the pure holiday magic that Zach Theatre has woven into and spun from Charles Dickens' classic.

This ain't your daddy's A Christmas Carol, though. Conceived and adapted by Dave Steakley, this show has a musical pulse; a vein of Motown, soul, funk, and even a little classic rock, pop, and EDM runs through the Christmas standards, carried by stellar voices across the board. The modern music and period surroundings are hard to swallow at first, but as we remember we live in the age of Hamilton, we suspend our disbelief and settle our brains for a groovin' good time.

Director Bryan Bradford brings us plenty of our holiday favorites, along with some stunning arrangements of modern tunes by musical director Allen Robertson – more than a few of which stand out. As the Ghost of Jacob Marley, Roderick Sanford delivers a soulful, dirgelike version of Michael Jackson's "Man in the Mirror" while imploring Scrooge to "change his ways." Not long after Jordan Barron's younger Scrooge proposes with Bruno Mars' "Marry You," Sidney Scott's Belle laments being discarded by him in favor of wealth with a heart-wrenching rendition of Whitney Houston's "I Wanna Dance With Somebody." With her powerful voice, two-time Grammy nominee Chanel encourages Scrooge to "Fly Like an Eagle" with her as the Ghost of Christmas Present. Michelle Alexander's Mrs. Cratchit garners applause midway through Beyoncé's "Halo," so emotional that the actress has tears streaming from her eyes. And frankly, if you're not welling up a bit yourself by the end of Paul Sanchez's Pavarotti-channeling version of "O Holy Night," you may want to check yourself for a pulse.

Other notable numbers are Kool & the Gang's "Celebration" during Mr. Fezziwig's Christmas party and a medley of Madonna's "Holiday" and Mark Ronson & Bruno Mars' "Uptown Funk" during the Christmas Eve gathering with Scrooge's nephew Fred (Travis Gaudin) and friends – the ladies and gents tackling each song respectively. Not to be too spoilerific, but act one ends in what can best be described as a Christmas "rave."

The cast is lovely and diverse, with the youth performers outnumbering the adults. Of special interest is the change to the Cratchit family. Rather than the traditional biological brood, these Cratchit children are all adopted, all different ethnicities, with Bob a Latinx actor and Mrs. Cratchit African-American. Bob Cratchit, it is explained, can never ignore a child in need. It's a beautiful choice.

And then there's the man at the heart of it all. As Ebenezer Scrooge, Harvey Guion is delightful. A perfect curmudgeon at first, Guion lets slip some wonderful moments of joy and wonder early in his ghostly journey, such that he quickly becomes a sympathetic character. It's a fine choice; we know Scrooge is going to have a revelation, why not let us really enjoy his journey toward it bit by bit? Eagle-eyed patrons will catch Guion getting into the rhythm himself as he observes festivities from the sidelines ... itself worth the price of admission.

I've never been a religious guy, but I love the Dickens (couldn't be helped) out of Christmas. I was looking for a fix of holiday cheer and found it in abundance with this slick and polished production. Zach's Topfer Theatre is packed to the rafters with not only Christmas spirit, but Christmas soul and funk as well. 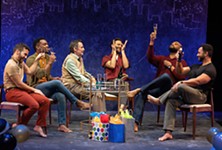 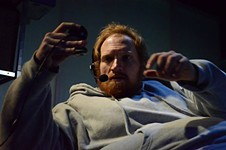 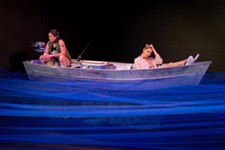