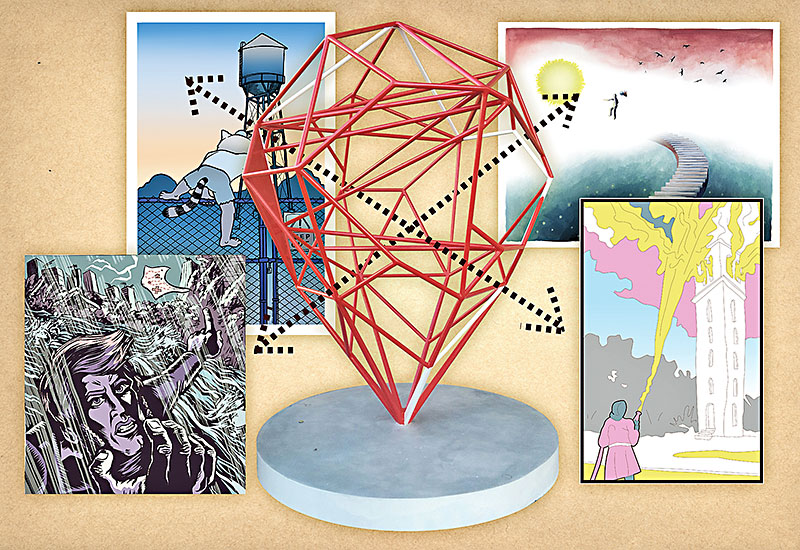 I'm writing to you from the year 1730, which is good news as it means the time machine sitting outside the new Central Library worked. Slightly less good news is that I'm hanging upside down in a huge live oak tree with a bunch of Spanish missionaries on horseback underneath me. And I'm not sure what to think about those four men in deerskin and buffalo hides heading my way. What do I do now?

Well, the only way to find out is: wander. See, physically, I'm still in 2017, standing at the Margaret Moser Plaza on West Third, where the only trees are, curiously enough, palms. But I've been led here – and back to the 18th century and that troublesome live oak – by Time Machine Freak Out!, one of four stories bound up in Wander, an interactive public artwork that propels users through Austin streets by linking chunks of their narratives to specific sites around Downtown. You pull up the free Wander web app on your smartphone – www.wanderatx.com – and any time you hit a break in the story, you have to hoof it to whatever spot shows up on the app map to get the next part. After I'd finished the first chunk of Time Machine Freak Out! at the Beacon – a 9-foot-tall sculpture outside the library that serves as the starting point for all four of Wander's tales – the dot on the map anchored on that spot sprouted a line extending to the plaza, and the next section wouldn't be unlocked until the GPS in the app determined that I was in close enough proximity to that location. Once there, in addition to discovering when and where my time jaunt dropped me, I learn that I clamber down from the tree, meet a nun in the group of missionaries, and make contact with what turn out to be friendly members of the Tonkawa tribe. But that's where the tale breaks again, and this time a new line directs me to the eastern end of the Shoal Creek Bridge on Fourth Street to learn my fate.

Clarification: I have the choice of going to that location to see what becomes of me in 1730 or jumping into another era in my search for the time machine's missing creator (who's needed to shut the thing down as it has gone haywire and is tossing locals hither and yon across the centuries). As conceived by architect-artists Chris Gannon and Brockett Davidson, and artist-app creator Chadwick Wood, Wander comes with a literary and literal fork in the road at each location in the narratives. You decide which one to pursue, and different decisions will send you down different streets with different events. So each of the authors who wrote stories for Wander – Lucas Schaefer (Time Machine Freak Out!), Janalyn Guo (Tinaus), Jessica Topacio Long (The Lost Bowie Silver), and Fernando A. Flores (The Oswald Variations) – had to construct multiple storylines, allowing for each point of divergence. Fortunately for them, the tales are relatively short, with only a few stops. Fortunately for us, Wander works in classic you-know-what-your-own-adventure style, meaning that you can retrace your steps from one narrative path and turn down another one to see what else might happen.

All that's to say that you can spend a lot of time, well, wandering through Wander's array of adventures. And since they direct you to more than 75 different locations in the heart of the city, you may find yourself becoming familiar with parts of Downtown that you have never seen or even knew existed – which is part of the point: Wander is an Art in Public Places artwork that also fits into the Downtown Austin Wayfinding Project, a city initiative intended to "make it easier for residents, commuters, and tourists to find Downtown Austin destinations and attractions." At each site, the app dishes up not only another slice of storyline but also a helpful serving of text about where you are and what's noteworthy about it. (A word of caution, though, to all you potential Wanderers: At present, the amount of construction in the vicinity of the Central Library can cause some hiccups in navigating the roads and spaces there; for instance, the east end of the Shoal Creek Bridge where I was supposed to get that next part of Time Machine Freak Out! was totally blocked off. Luckily for me, the GPS read me as near enough to the hot spot that it unlocked the chapter linked to the site.)

If you're still wondering whether Wander is for you, take note that Gannett, Davidson, and Wood, along with AIPP, have endeavored to make the work both appealing and accessible to as many folks as possible. Are you a kid? Two of the four stories are aimed at your age demographic. Speak Spanish? The app is available in Español as well as English. Vision an issue? The app is accessible for the visually impaired and blind community. Just don't like those rassafrass, frickin' smartphones? Hey, you can get Wander in printed form inside the library. So with all that effort to lean into your needs, why not give Wander a test walk? It may not have all of the 8 million stories in the naked city, but the four it has are quite a trip.

The Oswald Variations
by Fernando A. Flores, illustrated by Brian Maclaskey

A version of this article appeared in print on December 22, 2017 with the headline: Tales of the City 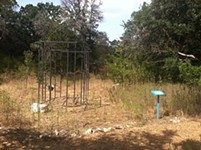 Art in Public Places' TEMPO Program
The city of Austin gets into temporary sculpture in a big way, debuting 10 new works around town this fall