Creating a space where those experiencing homelessness can tell their stories 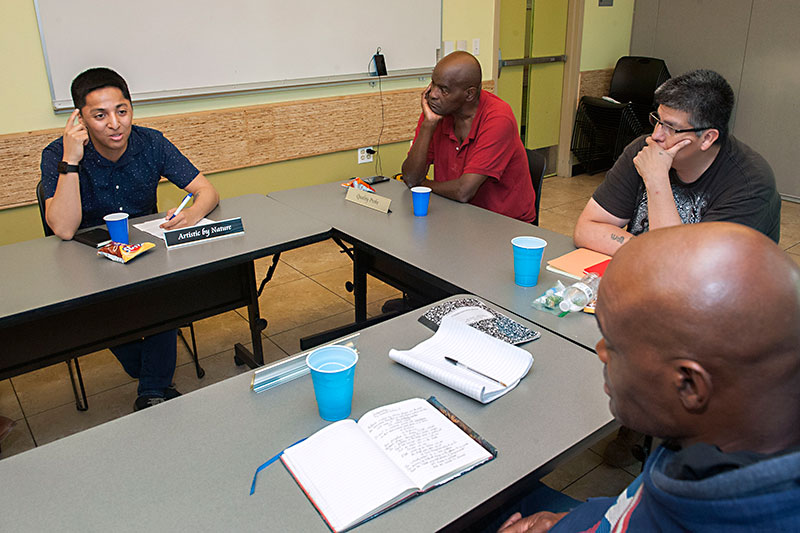 "Since I'm here, I gotta teach myself with all that noise that's happening downstairs. I need to teach myself how to write in that whole big mess right there," says Ezekiel. "It gives me the ability to look at all these people, including myself, to create characters and make a story."

"That whole big mess" downstairs, which Ezekiel gestures to with a sweeping hand, is the lobby of the Austin Resource Center for the Homeless. "Here," though, on the other side of the metal detectors at the ARCH entrance and down a second-floor hallway, is the conference room that for two hours every Saturday turns into a space where those experiencing homelessness can get support in telling their stories and finding their voices: the Street Lit Authors Club.

Today is Ezekiel's first day at Street Lit. He's in the first week of his second stay at the ARCH (the first was one day in 2009), and a longtime Street Lit writer invited him to the creative writing workshop after noticing Ezekiel writing in his notebook.

Now, Ezekiel sits at the corner of one of the foldout tables arranged into a rectangle so the writers all face one another. For the first 20 minutes, folks drift in and out. Some stop by for a snack table graze, others crack the door, ask about the event, and leave. There are four to five regulars every week. Today there are three, plus Ezekiel, all men ranging in age from their 30s to 50s, all current or previous clients of the ARCH.

Street Lit facilitators Tony Nunez, a client navigator at Front Steps, and Phil Force, the shelter's HMIS administrator, begin each session with a reading for inspiration. Today, Force reads Sylvia Plath's "The Colossus," followed by Nunez reading Ray Bradbury's "There Will Come Soft Rains." Both elicit enthusiastic responses from the writers, except for Marcellus, who shares that he's been in a withdrawn mood most of the day. Marcellus, who also writes for The Challenger – a local newspaper written by those who are experiencing homelessness or have experienced it in the past – is the veteran of the group. A gangly man who speaks with a scratchy whisper, he's attended almost every workshop since the first one in 2015. And while he's since been housed through the ARCH's services, Street Lit is an integral part of his identity on and off the page. "Street Lit is like a home to me, even if I do come in moods like I'm in today," he says. "I started here, and so I like coming here. I really appreciate the things that happen here, and it grounds me."

Street Lit was founded in 2013 by Barry Maxwell for an Austin Community College class assignment. At first a book donation drive for the ARCH, it became the workshop two years later. Since then, Maxwell, who was once homeless himself, has graduated from UT-Austin and is pursuing an MFA in creative writing at University of Montana at Missoula. "I'm proud to have started something that's bigger than me and can keep cooking along without me."

For two hours every Saturday, a conference room at the ARCH turns into a space where those experiencing homelessness can get support in telling their stories and finding their voices.

After the reading, the writers share their work. Sometimes pieces are workshopped across several sessions, other times it's a read-once-and-done deal. People then take turns providing feedback. Ezekiel reads his – a few lines about a man, who, after being faced with a blinding light at one end of a path, finds another path – and almost everyone agrees that the piece is grounded in concrete imagery, which is complemented by the internal rhyming. There is much speculation about whether the piece could be a poem or a short story – something Ezekiel himself isn't so sure about. He mentions dabbling with a different short story, but says it still needs work. He explains that he's pretty new to creative writing, but that keeping a notebook has always been cathartic for him. "Journals and stuff like that, keeping my own thoughts and actions on paper, I mean, it was a thing for me, you know what I'm saying? It just opened up a world – a whole different world for me," he says. "I began to see that writing was a way for me to escape from all the problems and issues that I was facing in my life."

In a writing workshop at a homeless shelter, one might think all the work would deal with homelessness. This is not the case. Force addresses the misconception swiftly and politely: "[Their] experience is homelessness and other things. It's 'This is who I am as a person. Homelessness has molded that, but I'm not a homeless person. I'm a person going through homelessness.'"

Nunez adds, "What people bring in is just a culmination of all their experiences. It's never really focused on their experience, solely, with homelessness. [Our goal is to give] people an avenue to share their story and share their work. We want people to hone the craft and be able to put their story on paper, and we always make the point that, 'Yes, it can be an avenue to share your story with [your] experience with homelessness, but it doesn't have to be that.'"

This isn't to discount the hardship that writers tackle in Street Lit. Each session closes with a writing exercise with a prompt, and today Tom, a client of the ARCH for three years and a Street Lit author for almost a year, chooses this one: Break your life into three chapters, give each one a title, and write an entry for each chapter. Tom divides his life into: Chapter 1: "Goodwill to All," Chapter 2: "The Betrayal," and Chapter 3: "The Internal Casualties." He writes of a promising young man who, after falling on hard times at the hands of "bosses, legislators, and leaders," joins the masses of "the extorted, the left behind, the abused, the misled." Ezekiel and Marcellus commend Tom on his honesty, while Nunez and Force express hope that Tom will soon be in a place where he can write a brighter chapter – not unlike the man in Ezekiel's piece.

The responses to Tom's reading demonstrate the twofold benefit of Street Lit: It's a creative writing workshop and a social support system. "Staying at the ARCH, I've been told, can be very isolating even though there are people all around," says Force. "It's almost viewed as a prison system by some of the clients. It's very institutionalized, and they don't want to talk to anyone; they follow the rules and keep their heads down." Street Lit, however, encourages clients to openly share and discuss their writing and life experiences. "We get to know each other on a deeper level, we share very personal things, and I think that's beneficial. It's probably therapeutic as well."

Street Lit enriches the lives of Force and Nunez as well. Both write creatively, so coming up with weekly writing prompts keeps them on their literary toes. Nunez also believes his work with Street Lit enhances his job at the ARCH, allowing him "to connect with clients on a deeper level and serve them in a better way" because he isn't just Tony who works 8 to 5. "I [write] with everyone here, and I consider everyone here a friend. We get to be ourselves and share our stories, and I really dig that."

Most of all, the Street Lit Authors Club is always about the writers first. For Maxwell, "The workshop wasn't – isn't – for the benefit of whoever sits in the showrunner's chair. It's for the folks who turn up with work to present or a curiosity about writing that they haven't pursued. We were there to learn from each other, to participate in each other's stories, in our struggles to tell them well, and to support one another in doing the work." For now, Maxwell is cheering on Street Lit from afar and looking into starting a Street Lit group in Missoula. Force and Nunez, meanwhile, work on Maxwell's old wish list: attracting more writers, growing beyond the ARCH, and publishing a collection of Street Lit authors' works.

As Ezekiel puts his notebook into his backpack, he tells the group, "I wanted to write a short story for a long time, and I wrote one. It’s in a safe place somewhere in my other bags, but you know, if I ever get it, I’ll come out here and read it to you all.”

A version of this article appeared in print on December 15, 2017 with the headline: Word on the Street