In its rush to be fun, the show fails to tap all the potential of this rom-com sequel to Pride and Prejudice 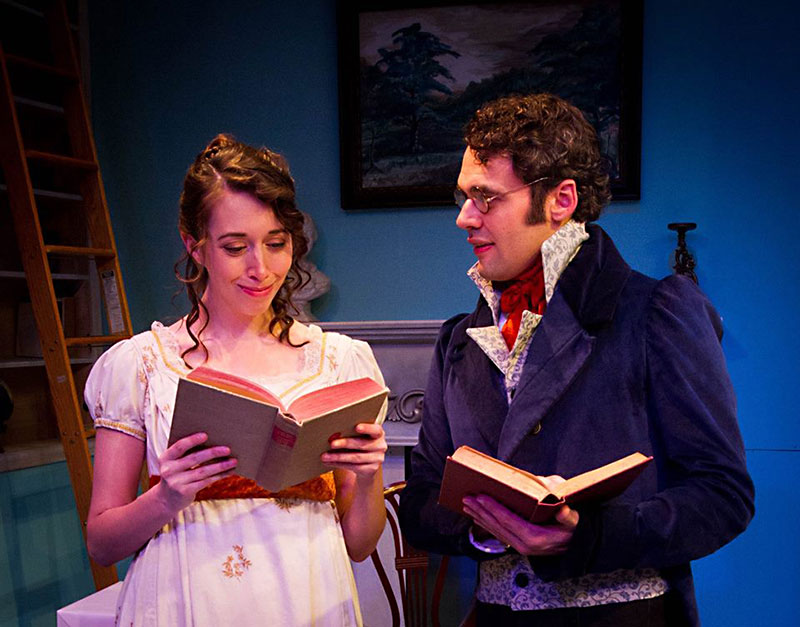 Romance by the book: Jess Hughes as Mary Bennet and Stephen Mercantel as Arthur de Bourgh (Photo by Austin Playhouse)

The wealth of Pride and Prejudice fanfic is something to behold. Arguably the most mainstream of all fandoms, there are novels, films, and plays such as Miss Bennet: Christmas at Pemberley by Lauren Gunderson and Margot Melcon. It helps that the source material is public domain. It also helps that the original story is at once complete and so ripe for sequel potential. It's great that three of the five sisters get married, but what then, Jane Austen?

This review is therefore in two parts: The first refrains from serious consideration of the play and Austin Playhouse's production, and the second indulges in critical work.

Oh my gosh, you guys. In the original P&P, Mary Bennet is a minor character who reads all the time and plays the piano badly. She has no social skills, but in Miss Bennet, it's two years later, Mary (Jess Hughes) is now awesome, but her sisters are so Mean Girls to her. Lydia (Maria Latiolais) is rude, but even Lizzie (Jenny Lavery) and the very pregnant Jane (Marie Fahlgren) laugh at Mary. They reduce her to what she was as a teen.

Then Lord Arthur de Bourgh (Stephen Mercantel), who has inherited the estate of the recently departed Lady Catherine, arrives, and he's really enthusiastic about ... snails. He loves science and reading, and he doesn't understand complex social cues. He and Mary are meant to be, and there are some plot complications, but they fall in love in the beautiful Pemberley drawing room (set by Mike Toner) wearing great clothes (costumes by Buffy Manners).

The trick with historical settings is that specificity actually makes a work more universal. It's disappointing that more effort isn't spent on a fuller embrace of Austen's world. A woman of means in advanced pregnancy would never have traveled miles to see her sister. Books – expensive objects in that era – would never have been thrown around, especially by those who love them. Accents in the production are slippery.

More than that, both script and production (directed by Lara Toner Haddock) miss the opportunity to fully embrace the Nerd Girl archetype. In her own way, Mary is as defiant as Lizzie. Where she might subvert her wit and talents in hopes of marriage, instead she chooses to live as her own self, even if that identity is met with derision. It's what sends Queen Elsa to belt it out in the mountains in Frozen. It's what makes Elphaba defy gravity in Wicked. Here, Mary Bennet ... plays a few bars of Beethoven.

Among the family, Darcy (Samuel Knowlton) alone recognizes how Mary has grown. Then Lord de Bourgh arrives. He is a kindred spirit, only one who hasn't deciphered people to the extent that Mary has. Each represents a shelter for the other from the work of interpreting and exchanging social cues. They could discuss snails and geography and taxonomies together with abandon.

The framework is there for Miss Bennet to really mine the depths of what it means for two lonely people to discover acceptance. There are excellent moments. Early on, Mary corrects the party's identification of a tree from fir to spruce, and the ensuing awkwardness is worth an hour of dialogue. Mercan­tel's turn as Lord de Bourgh exposes the character's social ineptitude without resorting to stereotype. Yet there is still so much unfulfilled potential for what the script and production might accomplish if they hadn't stopped at being a cute Christmas show.

If Mary and Arthur de Bourgh represent the depths of what might have been, then Lizzie and her sisters represent the mainstream. Miss Bennet is content to rest as a show for the latter.