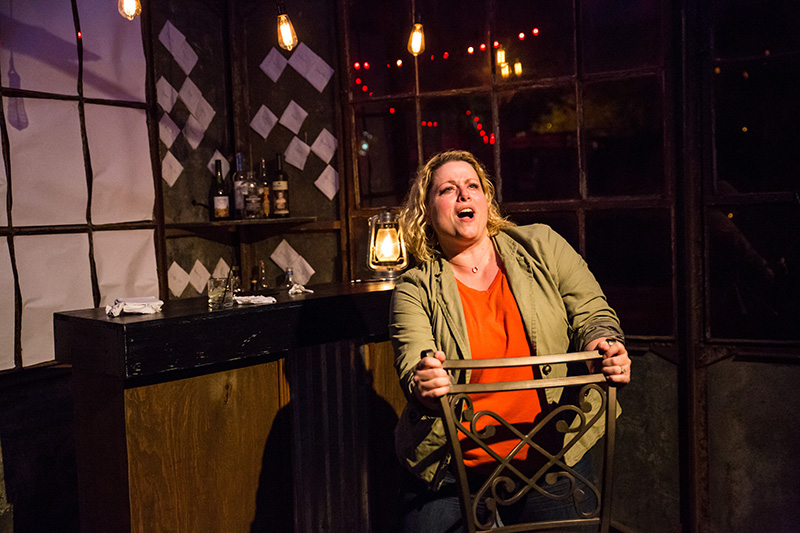 Do you remember how it felt to be 13? To be standing on the cusp of adulthood, awake to all its allure and liberties, and so impatient to taste them? To be cocksure that you were old enough to handle them, even though a small part of your still-child brain worried that you weren't? To climb out of the bedroom window of your safe and secure childhood and descend into the thrilling if scary midnight of the grownup world? Allison Gregory remembers, and the proof is in her new one-woman play Wild Horses, which immerses us in the experiences of an unnamed girl during her summer at that pivotal age, as recalled by her older self over a few drinks at a bar.

Her experiences are largely the kind of misdemeanors familiar to anyone who's past adolescence: sneaking out of the house after bedtime, driving without a license, raiding the parents' liquor cabinet, trying to score some weed, heavy petting. If you didn't do such things yourself, you surely knew someone who did, which brings the narrative close to home. And for people who came of age in the Seventies, said universal indiscretions will resonate even more strongly, as Gregory sets them in that era, vividly detailing it with shag carpeting, stick shifts, queasiness-inducing water beds, America's Top 40 (and possibly also queasiness-inducing) hit "A Horse With No Name," and more signs of the time. But the period serves a purpose, too: the pursuit then of liberation and experimentation (especially with drugs and sex) echoes those of our young heroine and her partners-in-crime, Zabby and Linney. And since the Me Decade will never be confused with the Golden Age of Parenting, what with its excess of self-gratification masquerading as self-actualization, placing the tale in that time provides a sense of how the three engage in their reckless exploits without parental blowback. (The narrator's folks, we hear, have their own problems to deal with.) This becomes more pertinent during the one incident that isn't so universal: the girls attempting to set free some abused horses on a ranch.

It's an act in line with the teens' other self-indulgent moves in that it's impulsive, undertaken in the moment, without real consideration of consequences in the long term or even the short. But it's also the flip side of those actions, which were propelled chiefly by a desire to satisfy themselves. This is about others, about helping others, and it's fired by a sense of justice, the kind of pure passion for what's right that belongs to youth. They believe these horses deserve to run wild, and they'll do something wild to make it happen.

What they plan to do is, of course, dangerous, something any grownup would realize at once. But Gregory doesn't allow us the luxury of an adult filter here. Her narrator isn't relating her experience so much as reliving it, and we're swept along with her, seeing all of it through a 13-year-old's eyes. And in this Vortex Repertory Company production (part of a National New Play Network Rolling World Premiere for Wild Horses), our link to the tale is amplified by both the close quarters and the vibrant performance of Jennifer Coy Jennings. The bar in which this shaggy colt story unspools is just a corner of the outbuilding in the Vortex yard known as the Pony Shed (points for placement), a space so snug that Jennings is little more than an arm's length from any viewer, and whenever she makes eye contact – which she does, often – you feel the connection as direct and personal. Indeed, everything here feels deeply personal. Under the keen direction of Austin new play whisperer Rudy Ramirez, Jennings channels all of her natural vivacity into making this story hers, and she owns it so thoroughly, with such abundant humor and rowdiness and fervor and heartbreak, that in this tiny space the story becomes ours as well; the experience is as intimate as a slumber party.

"All that fear and freedom" – it's a phrase used by the narrator at one point to describe what she sees in the eyes of the abused horses, and it's so apt, too, for describing what it is to be 13 and wild. Most of us are far from that time and have long since been corralled and domesticated, tamed by the bit and the reins and the lash, but the gift we're given here by Gregory, Jennings, Ramirez, and the Vortex is the chance to feel once more that unbridled state of youth, with all those powerful emotions and impulses, all that fear and freedom. The result is so strong that when you step out of the Pony Shed, it feels like being released from the pen to run wild into the night.