Book Review: Esther's Follies: The Laughs, the Gossip, and the Story Behind Texas' Most Celebrated Comedy Troupe

In his history of Esther's, author Jesse Sublett follows the flow of four decades of frivolity 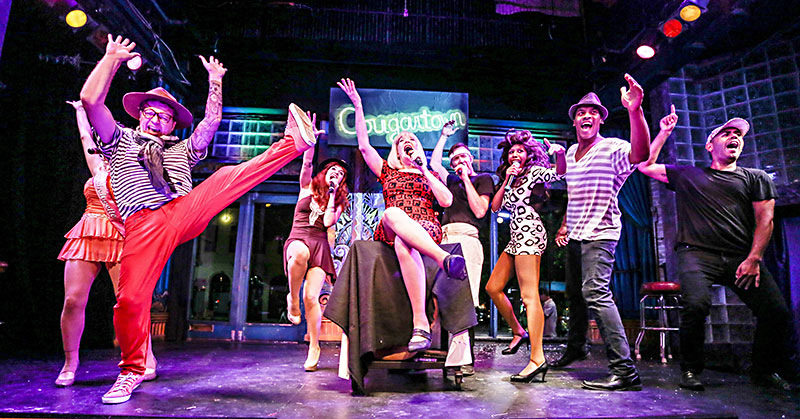 To give you an idea of just how long Esther's Follies has been peddling its singular blend of satire, music, and magic to delighted Austinites, one of its first signature characters, the one who opened every show in the storied early years, was Ruth Carter Stapleton. That name may not mean much today, especially for folks whose only point of reference for Jimmy Carter is swingin' a hammer for Habitat for Humanity. But way back when the cardigan-wearing, goober-farming Sunday school teacher was our 39th president, his little sister Ruth was famed as a born-again Christian evangelist, one who could claim credit for making a convert (albeit briefly) of Hustler magazine founder Larry Flynt. The year the porn publisher turned to Jesus – the same year that Ruth's bro took the oath of office, that Elvis left the building for good, that we all learned what the Force was, that we found rings around Uranus (rimshot!) – was the year a ragtag batch of theatrical misfits began putting on weekly shows in Austin that made the city laugh.

Seen that way, the challenge that Jesse Sublett (author of 1960s Austin Gangsters and Grave Digger Blues, among others, and a longtime Chronicle contributor) faced in penning a history of Esther's was on the scale of the Lone Star State: How does one capture 40 years of performances and performers, comedy onstage and drama off, in one book? His answer, as is apparent in Esther's Follies: The Laughs, the Gossip, and the Story Behind Texas' Most Celebrated Comedy Troupe, was: Talk to a lot of people who were there (and in some cases still are) and cram in as many photos as you can. Threaded through the heavily researched narrative that Sublett himself provides is an oral history from people who have been affiliated with the Follies – cast members, writers, technicians, support staff, artists – and assorted real estate types, pols, chefs, and other locals whose paths crossed that of Follies founders Michael Shelton and Shannon Sedwick over the years. They supply eyewitness testimony to all the comedic genius that has graced the Follies, the early slaphappy attitude and fly-by-the-seat-of-their-pants style, the inevitable mishaps and serendipitous successes, the irreverence toward Austin institutions even as Esther's was becoming one itself, and, when the curtain of catastrophe rang down, that show-must-go-on perseverance endemic to stage folk. It's in these accounts that one most often finds the spirit of the Follies.

Take Ruth Carter Stapleton, a Follies creation that lasted but a few years and would be unknown to most fans who came along after 1980. Michael Prochoroff, Esther's spot-on light man, here recalls that to open the show, Shelton, "in his ridiculous white gown as Sister Ruth, would run up and down the front of the stage doing his Why-are-we-here? Looking-for-salvation! thing to the howls and delight of the audience, even to the extent where they'd shout back his punch lines, and Michael would lean back to the ceiling as if to say, 'Praise God, say hallelujah, they've got it!'" 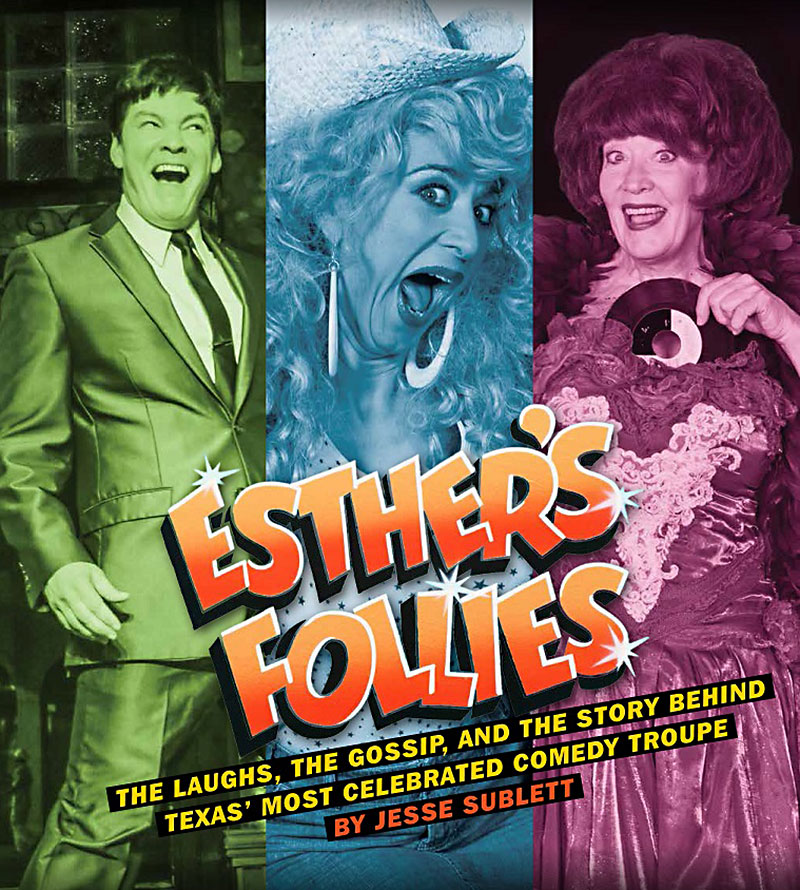 How does one capture 40 years of performances, performers, comedy onstage and drama off, in one book? Talk to a lot of people who were there (and in some cases still are) and cram in as many photos as you can.

Shelton tells how, in the days when the shows were free, Sister Ruth would tag team with another revivalist played by Sedwick to cadge cash from the crowd. "It wasn't until after the first show or two that we realized we'd better start taking donations to help cover our expenses. So we started passing the hat, but we wanted to make it kind of unique, so we incorporated it into our gospel parodies. We'd end the show with Shannon doing Aimee Semple McPherson, soliciting money for someone with a disease so terrible you couldn't even say the name." After Sedwick would point to cast member Terry Galloway doing a Tiny Tim schtick and plead, "If we can just get a few more dollars for poor little Jimmy," Shelton would roar in with "Do you have the spirit??? Let me hear you say you've got the spirit!!" And, Shelton says, "it worked because we were also passing the hat for ourselves." A few pages later, we learn Sister Ruth also sank a series of Follies shows with the city after opening one in Zilker Park with an F-bomb. In the words of masterful musical parodist Steve Saugey, "You had Michael come out as Sister Ruth and, right off the top, saying, 'They ain't Baptists, fuck 'em!'"

Throughout the book, Sublett serves similarly juicy tales involving other memorable Follies characters: William Dente's Dame Della Diva; Galloway's Jake Ratchett, Short Detective; magician Ray Anderson's sleazy alter ego, the Amazing Frank; Kerry Awn's George W-dot-com Bush; Cindy Wood's H. Ross Perot; Margaret Wiley's Chi Chi La Bomba; and of course, still pulling mementos and hardware out of her dress after all these years, Sedwick's Patsy Cline. And he pays worthy tribute to many of the show's best-loved bits: Lyova Rosanoff's classical gas "Jalapeño Chorus," Kerry Awn's audience-interactive "Yes, My Darling," Ted Meredith and Shaun Branigan's politically astute "Ted for President," and, naturally, the through-the-windows-and-on-Sixth Street, everything-and-the-kitchen-sink, aqualicious closer "Cry Me a River." In each, you find, as I once wrote in these pages (and which Sublett kindly quotes), "the renegade streak running deep in [Austin's] soul" and a "tweaking of the nose of the status quo." Those are qualities, along with a love of revelry, that our citizens see in themselves. And since they see them celebrated at the Follies: Esther's is Austin, Austin Esther's.

Because of that powerful identification with the attributes that power the Follies, our citizens have kept coming. And those same attributes have kept the Follies going. Fire couldn't stop the show. (It tried in '83.) Death couldn't stop it. (Rest in peace, Doug Dyer, William Dente, Margaret Wiley, Bill Fagan, Joe Hollis, Joel McKean, "Red" Ryder Schwartz.) The fratification of East Sixth couldn't stop it. (It just gave Esther's more fodder for jokes.) And age? Well, age seems to have simply honed the comedic skills of the Esther's ensemble and their ability to provoke laughter. As you look over the book's closing chapters, reading about what Sedwick and Shelton's creation is doing now, about the latest gasp- or guffaw-inducing illusion from Anderson, about the timely satire and classic comedy produced by Cindy Wood or Ted Meredith or Shaun Branigan, you may come to feel that this show is as strong as it's ever been, that Esther's could keep running, in the original words of the old closing number, "always."

Sublett writes, "Forty years is a long run for a neo-vaudeville-and-magic show." You know what? Vaudeville itself didn't run much longer than that. That's how long Esther's Follies has been peddling its singular blend of satire, music, and magic to delighted Austinites, and thanks to this new book, we can savor every wild, wonderful, madcap minute of it.

Jesse Sublett will discuss Esther’s Follies: The Laughs, the Gossip, and the Story Behind Texas’ Most Celebrated Comedy Troupe, along with several Follies cast members, in a free Meet the Author program Tue., Dec. 5, 6:30pm, at the Austin History Center, 810 Guadalupe.

A version of this article appeared in print on December 1, 2017 with the headline: Laugh Me a River 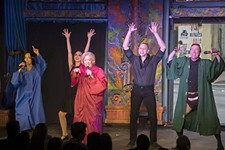