Austin Shakespeare’s Much Ado About Nothing 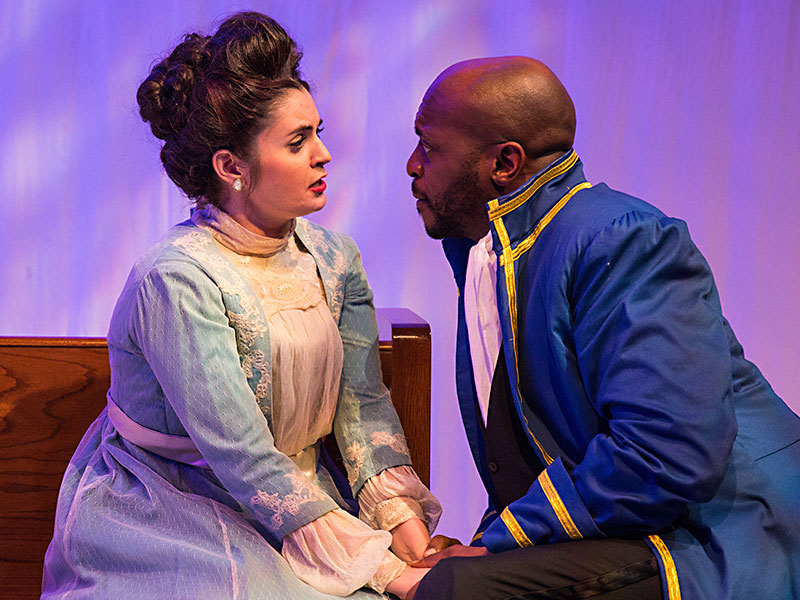 They’re in love with each other after all: Gwendolyn Kelso’s Beatrice and Marc Pouhé’s Benedick (Photo by Errich Petersen Photography)

Of all of Shakespeare's comedies, Much Ado About Nothing may be the one that most easily accommodates the rom-com treatment. It has an admittedly silly pretext. The two leads hate each other at first, but there's always that sexual tension lurking just under the surface. Even the most powerful people in the room are obsessed with making sure that everybody falls in love. For those keeping track at home, it's also mostly in prose rather than verse.

Austin Shakespeare's current production seizes on these handholds, and the result is a clear interpretation of the story with lots of genuine laughs. As Benedick and Beatrice, Marc Pouhé and Gwendolyn Kelso are beautifully cast. Both actors show superb comic timing and creativity, and they match their skills wonderfully to become a believable couple. Their charm lies in how each professes to want nothing to do with the conformity and restraints of marriage, that social pillar – but once each is presented with the chance to be loved without rejection, they seize on it right away.

Most of the plot revolves around the secondary couple, Claudio and Hero. Hero is a challenge, as a young woman whose virginity provides the narrative linchpin. On a modern stage, "obedient daughter" doesn't have quite the same punch as "sassy sidekick," and Corinna Browning does her best trying to make Hero both innocent and interesting. As Claudio, Joseph Banks makes great fun out of his part. He's a lover to Hero, a buddy to Benedick and Don Pedro (Colum Parke Morgan), and the dumbass who falls for the rumor put into place by the evil Don John (Samson Pleasant) about Hero getting some action with another man. Banks makes it all work with a likable character.

The strongest scenes are some of the most famous from the play, when Benedick and Beatrice's friends put on a ruse and allow themselves to be overheard discussing how each of the two only pretends to hate the other but is truly caught in the violent throes of earnest love. Watching good actors playing at being bad actors never gets old. Toby Minor also has a brilliant turn as the clown-cop Dogberry, with some committed physical comedy. Even in this age of beard-wearing hipsters and other feats of male facial hair, Dogberry's ridiculously scarlet mustache and beard deserve special mention.

This Much Ado features an original composition by Greg Bolin in the style of bossa nova, and music throughout sees actors playing to the music and throwing in some basic salsa moves here and there. The music on its own is lovely but ultimately jarring considering the characters are all dressed in costumes (designed by Benjamin Taylor Ridgway) from the Belle Époque era (think run-up to Downton Abbey). Deliberate anachronisms are one thing, as the program notes argue. It's another thing asking actresses to perform fluid, sexy dance steps in long and narrow dresses from the Victorian era. Corsets don't lend themselves to hip action. Which was kind of the point.

As a play, Much Ado is light, and so is this production under the direction of Austin Shakespeare Artistic Director Ann Ciccolella. Some standout performances provide its highlights, creating an evening of gently humorous entertainment.