Work after work in this program emphatically spoke to current events, to the here and now 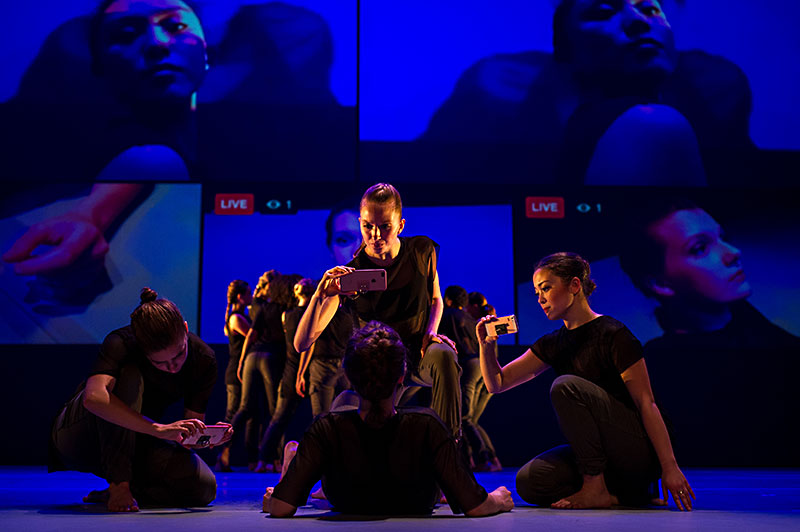 The cast of “In the Ether” (Photo by Lawrence Peart)

The word was spoken by one of the dancers in a cluster of about a dozen facing the audience. Then it was repeated by another in the group, then by another. One by one, in quick succession, each dancer said the word, emphatically, insistently, with purpose, until everyone had said it. Then, looking right out at us, they all spoke it again as one: "Now!"

There was no question in this year's Fall for Dance what time was being addressed by Dance Repertory Theatre. Again and again, works in this program stated, emphatically, insistently, with purpose, that they were focused on this time, the present moment, now. Dancers with cell phones recorded one another as they moved, their faces and bodies live-streamed to a huge screen. An African-American man in a black hoodie danced in a spotlight, at times taking a knee, as images of civil rights struggles flashed behind him. Dancers in lines repeated gestures as if their moves were refracted through broken glass while a screen filled with phrases related to immigration, the one repeated most often being "Forget the wall, we need a mirror." Here, the dances were mirrors, reflecting who we are in this time of social disruption.

"In the Ether," by DRT Co-Artistic Director Erica Gionfriddo, showed us how subject we are to the allure of the cameras we now carry 24/7. Dancers with them aimed them at other dancers, whose behavior would then alter, playing to the unblinking eye. Close-up shots created an illusion of the personal, but as the preening and posing of the dancers onscreen grew more similar, they all seemed to be in pursuit of viral celebrity, those long-promised 15 minutes of fame to which we now think we're entitled. The effect was unsettling, and made more so by the 10-second delay between the live movement we saw onstage and its appearance onscreen, by hands without cameras twitching like they were missing a limb, by several dancers with cameras pointing at the same dancer at once, pinning her to the floor like a bug. Do we only wish to see and be seen now through a screen?

"When," the dance with all the declarations of "now," didn't confront that question explicitly, but it did urge us to combat distractions and complacency. In the cluster of dancers, some would close their eyes, their bodies weaving, as if dozing, which prompted others to snap their fingers at the sleepers, awakening them. This happened repeatedly, and even when one awakened dancer became active and led others in movements, it didn't mean she wouldn't fall asleep again. It's too easy to nod off, choreographer Jenn Freeman seemed to say, and there's work to be done that can't afford delay. After a highly charged end section with dancers moving in sync, they made sure we knew: When? Now.

That urgency infused Francis Rodriguez's "Mirror," with its talk of walls and lives shattered like glass, and "(Re)current Unrest Pt. 3: Clapback," by Charles O. Anderson, dance program head at UT's Department of Theatre & Dance, and DRT Co-Artistic Director Jeremy Arnold, with its resonant images of current race relations. In the latter, the figure in the black hoodie was alone in the spotlight but not alone onstage: Around him were 14 figures in white hoodies. While it wasn't always clear if they were part of his community or antagonists to it – at times they danced in step with him and their clapping, drawn from Steve Reich's Clapping Music, seemed to inspire him, but a moment when they pulled up their white hoods and encircled this black man made for a chilling evocation of the Klan – what was clear was the soloist's state of being. As danced by Anderson, this man wore four centuries of struggle in his face and body, his expression agonized, stressed, and yet he would kneel, one hand raised, at times open but always closing in a fist, as his other closed hand beat his chest over his heart. And always he rose again, dancing intently, defiantly, as the clapping rhythms built and a recorded voice called for justice.

The program was not without nods to the past. Ray Eliot Schwartz's delightful, animated "Otras Puertas/Otros Rumbos" took us back to the classic circus, replete with old-school tumbling and acrobatics, then made surprising detours into old Mexico and Thirties theatrics. And Dorothy O'Shea Overbey's "Crone" paid lush tribute to narrative ballets of yore in a mythic tale inspired by The Rite of Spring. Still, even with its luxe orchestral score by composer-in-residence Samuel Lipman, colorful and flowing costumes by Aaron Kubacak, and graceful movements, this work had its eye on the present as much as the past: Its next incarnation will be a virtual reality film. This school and its students belong to the now. 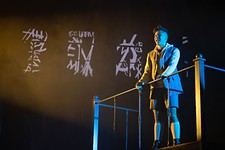 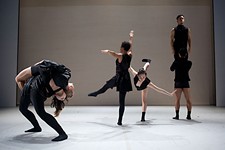