At St. Edward's, this reworking of Homer's Odyssey gives names to the nameless in today's immigrant crisis 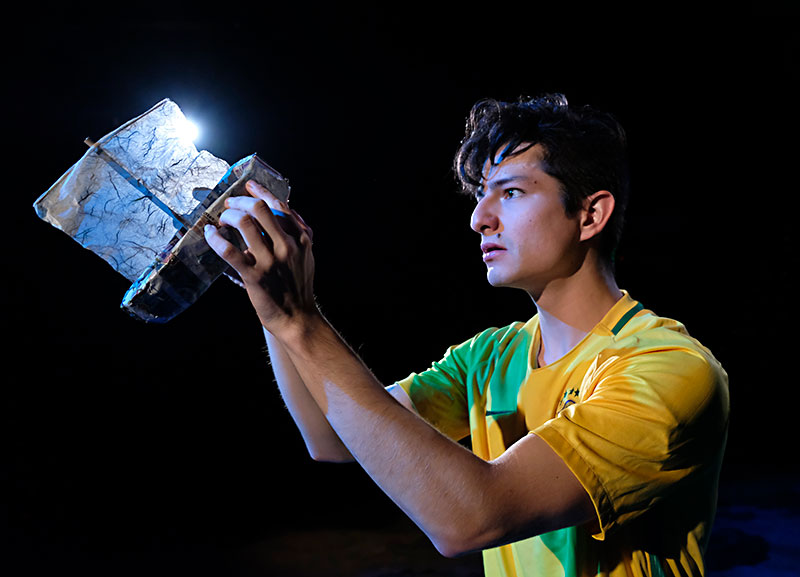 In Homer's classic poem, Odysseus bests a ravenous Cyclops by telling the monster that his name is "Nobody." Then, when the one-eyed villain falls into a drunken slumber and our hero blinds him, the Cyclops runs to his door and calls for help, yelling, "Nobody's killing me!" It results in zero help from friends and neighbors.

ANON(ymous), presented by the St. Edward's University Department of Performing Arts, reinterprets Homer's Odyssey as a different kind of epic journey – the one faced by refugees as they are driven away from their homes, away from their families, out of their countries, and across oceans until they find themselves nameless and invisible, their humanity obscured, their dignity compromised, their lives threatened.

The play follows Anon (our Odysseus) on a perilous quest to find his mother after he has been thrown overboard a U.S.-bound ship. After washing up on the beach in the temptress Calista's gated community (and a deus ex machina or two), Anon, along with a rotating cast of companions and adversaries, fights to survive in the American underbelly, a place with few rules and fewer kindnesses. Greek mythology nerds will be tickled left and right by Naomi Iizuka's whip-smart and spot-on script in which the lotus fruit becomes Skittles, the Cyclops becomes a bat-shit butcher with no depth perception, the enchantress Circe becomes a bar owner named Serza whose patrons snort like pigs when they laugh, and true royalty owns a curry joint. Seriously, if you're not familiar with The Odyssey, hop onto Wikipedia and just get the bare bones before seeing ANON(ymous); if nothing else, you'll gain a deeper appreciation for how truly special this script is. Because even with all the classic-lit jokes aside, ANON(ymous) is still an incredibly strong text. Audience members who slept through seventh-grade English will still be fully engaged by this powerful, beautiful, and unforgettable story.

And under the direction of Michelle Polgar, the St. Ed's theatre department does Iizuka's script all the justice it deserves. The overall aesthetic of ANON(ymous) is a perfect mix of modern mayhem and classical Greece. Lightning-quick surprises constantly spring from Jessica Colley-Mitchell's impressive set that features nine possible entrances in a bi-level playing space. Kathryn Eader and K. Eliot Haynes paint absolutely hypnotic pictures with light and sound, respectively, and Toni Bravo has created emotive movement sequences that accent and at times transcend the text.

Josean Rodriguez heads up a remarkable acting ensemble – and is faced with a hero's quest of his own. The physical and emotional demands of Anon are pretty epic in scope, and Rodriguez fearlessly throws himself into the story with everything he's got, paving the way for an ensemble cast that functions as one – be it for a snappy set change, a movement piece, or a character switch-up. These young actors know their stuff and have put together one Hades of a inspirational team.

ANON(ymous) not only retells and updates a classic myth, but repurposes it as an incredibly powerful allegory for the immigrant crisis in which our country is currently enmeshed, giving names to the nameless and calling out xenophobia as the life-or-death matter that it is. And it is a life-or-death matter. Displaced people are still people, and every day they die along with their dreams, their stories, and their names.

They are anonymous, and Nobody is killing them.