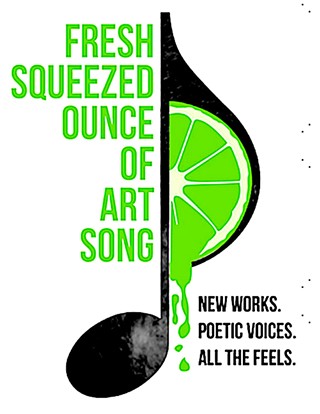 When that phrase appears in an art song, repeated over and over to punctuate stories of women who have stood against prejudice, harassment, and danger, then you know this isn't some musical relic of a previous century but a work that is, as One Ounce Opera says, fresh-squeezed. And indeed, the cycle with that topical refrain, Kevin March's "Songs of Remembrance and Resistance," was receiving its premiere at OOO's second concert of new art songs. Of the seven compositions this year, March's was the only one with a modern political resonance, but all struck the ear with the crispness of our time, of now, even when they drew on the past.

"Ne'er Part I," for instance, was inspired by the Peter Pan story, as J.M. Barrie set it down in the 1911 novel Peter and Wendy. But composer Marc Hoffeditz's spiky setting brought the author's musings on childhood and growing up into the 21st century, its unsettled, unresolved score reflective of our own anxious age. With soprano Elise Leung Kotara infusing each line with urgency, the invitation to Neverland was stripped of nostalgia and given the feel of a matter of life and death.

Similarly, two of the works employed texts by poets active early in the 20th century. Douglas Fisk's "Banjo and Shadows" drew on five pieces by Carl Sandburg, almost all word-portraits of the natural world, vivid images of night and rain, fogs and seas. Fisk's music, though, cloaked them in shadow, a somber cast that seemed to belong more to the present than the past – an impression heightened by the earnest performance from baritone Jake Jacobsen. Sandburg contemporary Sara Teasdale supplied the text for "Music Like a Curve of Gold" from composer Juliana Hall. Its theme of loving life, of recognizing and cherishing all that's lovely in it, might have felt sentimental and old-fashioned had Hall not provided music that was lyrical without being precious. The duet – sung feelingly by soprano Rebecca Smeltzer Staley and mezzo-soprano Julie Silva – tightly intertwined the two voices so they shifted in and out of harmony, creating sounds that were beautiful in ways both traditional and strikingly original.

Composer Steven Serpa tapped a poet of his own era, Jeffery Beam, for "Creatures: A Bestiary Retold," a work whose format recalled Camille Saint-Saëns' Carnival of the Animals – musical settings of short poems, each devoted to a different beast – but which otherwise bore no more resemblance to that work than a wolf does a sheep. Unlike Ogden Nash's whimsical epigrams for Carnival, Beam's verses were mythic, mystical, cosmic in their evocation of creatures as diverse as beaver and unicorn, and Serpa complemented them with a score of unexpected rhythms and musical lines. It created vocal challenges for soprano Maureen Broy Papovich and mezzo Chelsea DeLorenz, but they proved able guides through this strange menagerie.

The whimsy of the evening came from two songs both performed by tenor Brian Minnick: Michael Scherperel's "Up for #1," a contemplation of the instructions for a dual-flush toilet; and Rodney Rawlings' "When Matter Touches Antimatter," a warning that romantic matters could be as potentially catastrophic as the contact of opposing particles. The lightness of both was refreshing, an irreverence familiar from late-night TV and FB posts transposed to the sober form of art song.

But in the end, the work that felt most current, like it had just popped up on our news feed, was the one with the phrase that's now a rallying cry for women. With verses paying tribute to Rosa Parks, former slave Harriet Jacobs, Minnesota State Representative Ilhan Omar, and Klara Baic, a Serbian mother who sheltered Jewish boys during the Holocaust, "Songs of Remembrance and Resistance" sketched out profiles in courage and compassion with March's music capturing the drama of its narratives. Soprano Amy Selby and mezzo Veronica Williams clearly felt the power of these women's stories and channeled it, with Williams positively regal in her resolve. In closing the concert, this work proved that art songs are not just alive in our time, but relevant as well. 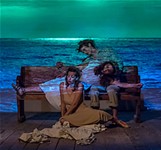