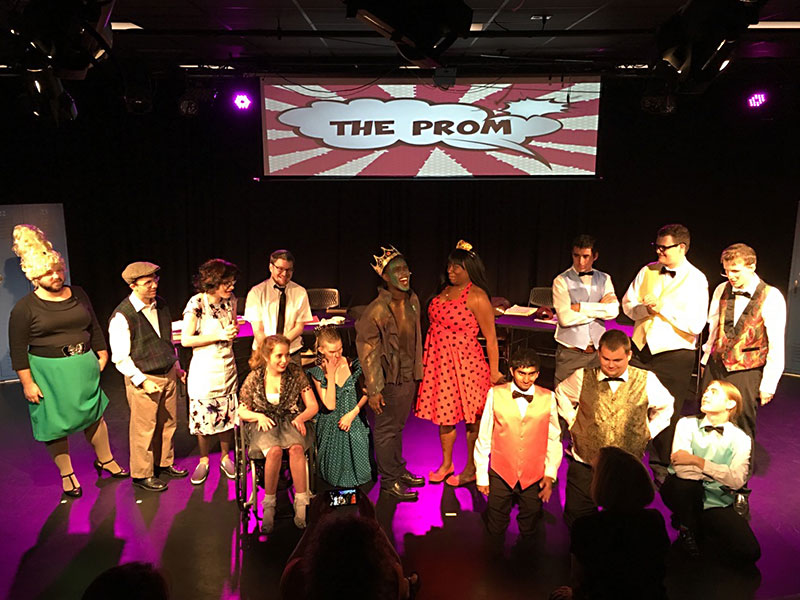 I knew nothing about TILT Performance Group going into its latest production, Zombie Prom. As the cast took the stage at Balance Dance Studios' Bravo Theatre, I discovered the acting company of TILT is primarily comprised of people with special needs, disabilities, unique abilities ... the proper nomenclature is debated in director Adam Roberts' program note. I'll admit, I was a bit thrown. How would I review this piece? By what rubric? Where would the bar be fairly set?

Once I stopped myself from thinking like a privileged, ableist jackass, I settled in and quickly found myself in awe of the passion, dedication, and talent put forth by a wholly inspirational cast.

Zombie Prom (book and lyrics by John Dempsey) is a campy, kitschy, 1950s-style musical comedy set at the dawn of the Nuclear Age – and scare. Located near a nuclear power plant, Enrico Fermi High (get it?) becomes the stage for a timeless story of teenage love with an undead twist. Orphaned rebel bad boy Jonny (with no "H") falls for good girl Toffee, and all is well until Toffee's parents forbid her from seeing Jonny. Distraught, Jonny hurls himself into the toxic waste at the nuclear power plant. He is buried at sea. As prom approaches, a heartbroken Toffee begins hearing Jonny's voice everywhere. She assumes it's just a hallucination brought on by heartache ... until Jonny appears, mutated and zombified, claiming Toffee's voice (and love) brought him back.

As with any good zombie yarn, but especially here, Zombie Prom becomes a poignant parable about discrimination and acceptance of those who are "different." Jonny is shunned by all but Toffee, but most of all by the high school principal, Miss Strict (played in glorious drag by a hilarious Brian Cheslik). Of course, everything works out in the end, with some fun twists and turns along the way.

As living/undead lovebirds Jonny and Toffee, respectively, John Byiringiro Singleton and Brandi Ware not only exhibit great chemistry, but also blow the roof off the place with some powerful voices that I must admit I did not expect. Toffee's friends Candy and Coco (Jessica Michallick and Kristen Gooch) are charming and hilarious throughout. Quinn Reich, Blake Common, Peter Richter, Jonathan Pate, Vineet Desha, and Sam McDonald play "the guys" at the school, each with a well-fashioned character. Jarrett Suhr has a distinct twinkle as a reporter with a link to Miss Strict's past, and brothers Garret and Gordon Roden get more than a few laughs as Toffee's disapproving parents.

Roberts packs a lot of heart into a quick, low-frills production. The set is simple: a couple of lunch tables surrounded by high school locker set-pieces place us at Enrico Fermi High, which will eventually transform for the big prom. Scott Ferguson's lighting does well in transporting us to different locations when the need arises, and a video projection screen above the action calls out the musical numbers in bright, grand fashion. With live sound by Jeff Miller and live accompaniment by Roberts, the soundscape is fun and just cheesy enough to keep tongue planted firmly in cheek. Costumes and props by Gail Dalrymple, Pam McDonald, Shea Shelby, and Cassidy Kaye help to round out the environment, poodle skirts, letterman jackets and all.

Appropriate for all ages, Zombie Prom is yet another fun entry into the month of Halloween. Kids may have some questions about why the cast look and act a little differently, but what better time for a discussion about those differences, and how they shouldn't stop us from chasing our dreams?

Bravo Theatre at Balance Dance Studios, 4544 S. Lamar
www.tiltperformance.org
Through Oct. 29
Running time: 1 hr., 5 min.
A version of this article appeared in print on October 27, 2017 with the headline: The Undead Need Love, Too 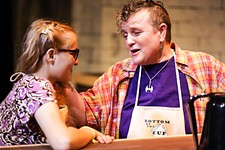 TILT Performance Group's Pandora: Life Outside the Box
This world premiere of Allen Robertson's musical releases kindness and joy into the world