Keeping Up With the Satans

For Halloween, one South Austin yard becomes an infernal delight 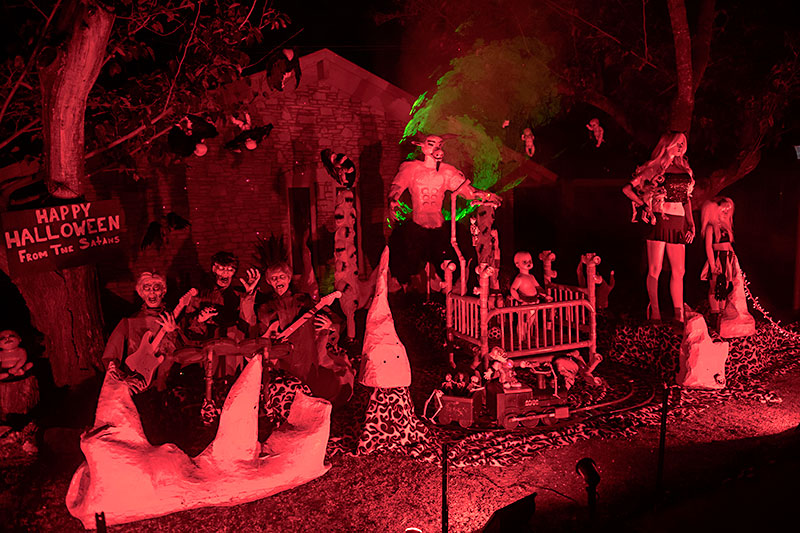 The eerie red glow of Gary Patton's front yard is visible a block away. Move in closer, and the members of the Satan family begin to take shape among the fog and strobe lights. To call these homemade characters just Halloween decorations is an understatement; each is a carefully crafted work of art.

Loosely modeled on the brood in TV's Family Guy, the Satan family includes a 7-foot-tall Satan, his wife, their three children, and two dogs, one of which has three heads and glowing red eyes – a nod to Cerberus in Greek mythology. Each demonic figure is either homemade or customized after purchase.

Every night in October just before sunset, Patton begins transforming his unassuming front yard on Whispering Oaks, then sits out with his creations until he's ready for bed.

"We call all of October Halloween," he says.

Each evening brings a different scene in the Satan family's life. Sometimes it's just the son, modeled after AC/DC's Angus Young and his schoolboy uniform, surrounded by sword-wielding skeletons. Other times, it's the scantily clad mom with her skeleton dog, enveloped in fog and a green laser vortex.

On weekends, Patton fills his entire yard with the family, right down to the red baby demon in its crib with a train circling around. Because the battery runs out after just four hours, Patton bought two trains – one filled with skeletons, the other carrying a likeness of the president as a baby made out of papier-mâché by his spouse Jessica Patton.

Gary Patton grew up in South Austin and says he knows when he was a kid what he would have done to a yard filled with unattended decorations. So he spends each night pacing between the yard and garage, continually checking fog machines and fine-tuning the lighting. Then when it's time for bed, he hauls everything back to the garage to make sure it's not stolen.

People drive by and slow down. Some neighbors walking their dogs stop and stare, others take out cell phones and snap photos, which Patton strongly encourages. One night, a truck with a bed full of young cheerleaders stopped in front of the house and chanted, "Go Halloween!"

"Last year, someone sent us a skull-and-crossbones thank-you card in the mail," Jessica says. When the Pattons first moved in five years ago, they worried what the neighbors might think of their satanic display. So far, everyone seems to appreciate it.

Neither Patton can say where the idea for such elaborate Halloween decorations came from, other than the fact that Gary just loves the holiday. He says that when he was a kid, his whole family really came together to trick-or-treat and was happy.

"I'm also fascinated with horror movies. They go together," he says.

Before he met his wife, Gary began decorating the balcony of his apartment. Then, together, the couple first made the massive Satan from papier-mâché, chicken wire, and YouTube videos. Tenacious D and South Park inspired the hulking demon, complete with six-pack abs, a goatee, and centaur legs.

When the Pattons moved from the apartment to their house, they had to lower Satan down from the three-story balcony because it didn't fit through the door.

Each year since, they've slowly expanded the Satan family. This year's additions include the skeleton army, the trains, and the laser lights.

"It could be a comedy," Gary says of his creations. "I think the characters are there – like an animated series."