Ballet Austin’s Not Afraid of the Dark

The glow-in-the-dark visions of this earnest, sweet ballet will excite and inspire the youngsters who see it 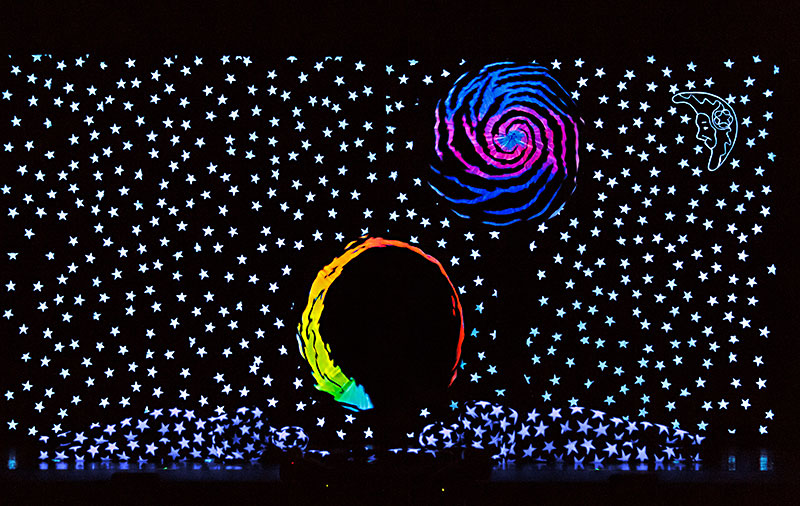 The kids love it. That's the most important thing about Not Afraid of the Dark, Ballet Austin's production with its apprentice company, Ballet Austin II. At a recent performance, kids as young as 2 were hanging on to the edges of their seats for the duration. They were also bouncing, jumping, squirming, and clapping, but that's how you know a ballet for young audiences is successful.

The ballet shows a child (Henry Schaefer and Azaliah Buhrig on alternating days) going through his evening routine and heading to bed for the night. His dreams are filled with colors and lights and fantastic visions, none of which are frightening to the child or to the audience.

The ballet is the result of a collaboration between the company and established children's entertainer Joe Scruggs. Scruggs created the music and concept, and he and his family recorded much of the voiceovers. It's Tony Tucci's lighting design that executes the concept, however, and the lighting is as much the focus as Stephen Mills' choreography. For a big part of the show, dancers perform in the dark while dressed in black from head to toe, and various tricks with glow-in-the-dark effects make for clever opportunities to play around.

There were two audience experiences happening simultaneously at a recent performance. The young children in the audience pretty much flipped out (in a good way) when the lights first went dark and colored lights like fireflies were projected throughout the house. In "Bubbles," when the parents try to give their child a bath, three dancers appear in costumes (designed by David Gaddy) with plastic balls attached all over – they're bubbles, right? – and that was pretty silly, but the kids ate it up. To say nothing of "Gingerbread Man," when the parents kept chasing the child back to bed.

On the flip side, when "Falling Asleep" presented the most conventional choreography of the show thus far, basically every parent in the house leaned over to try and point out technique to their kids. Teachable moments! I was not immune; I missed the exact number of pirouettes that Jonathan Alexander executed in my haste to make sure my 3-year-old guest got the word "pirouette" entered into her vocabulary. Whatever: Alexander nailed the ones I saw, and my kid enjoyed the crazy lights.

Is this the kind of production that fulfills both young audiences and more mature dance enthusiasts? Almost. Young kids seemed to adore it. As a critic, I recognize how presenting the parents as a perfectly coiffed heterosexual couple in a dress and dance slacks conforms to the longstanding conventions of ballet. As a parent, however, it really seems like nobody should be smiling and at least one parent should be in track pants as the other gives up and lies on the floor. (Maybe that's just my house.) So, this isn't a show that opts for a wink-and-nudge approach to the parents. It's an earnest, sweet ballet that will excite and inspire the imaginations of the youngsters who see it.

Not Afraid of the Dark