Half Price Books: Where Rare Is Well Done

Does the rare books room at Austin's North Lamar location owe its success to alchemy? 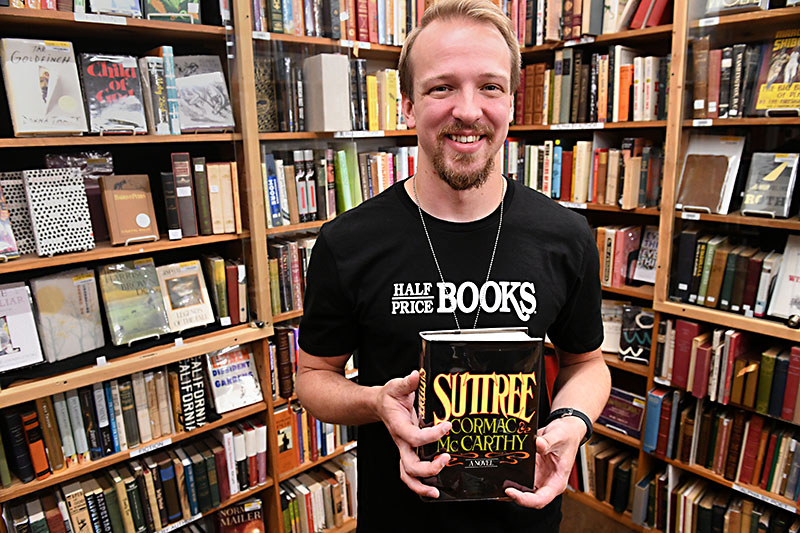 There's a beautiful pearl, you might say, in one of the tastiest oysters in town.

You might say that if you were a writer, especially, as writers tend to work in metaphors. Writers often write books, too, and books (along with vinyl records, magazines, and more) are what's sold at Half Price Books, the Dallas-based chain of stores that's been expanding across the nation and has several locations here in Austin.

It's the company's 45th anniversary this year, and for a bookstore of any kind, much less a print-centered secondhand shop, to thrive in these digital times ... well, that's no small achievement. But we're talking about Austin's own Half Price Books at 5555 N. Lamar, specifically, the enormous emporium of used print-and-other-recording-format media that's bordered the North Loop neighborhood since moving from smaller digs on Guadalupe, and we're talking about it because it's the metaphoric oyster here – and the unique rare books room in the back of that store is the pearl.

Drew Miller is the general manager of the popular North Lamar location; the affable young bibliophile took charge of the operation after transferring from a Half Price Books in College Station back in 2012. Merrit Spencer, longtime Austinite and constant reader, is the woman who wrangles the rare books room; she's been with the company since 1999.

"I was working at the Dog & Duck Pub," says Spencer, "and I was tired of cooking. And I had friends who were working at Half Price, and I heard there was an opening, so I went and applied. That was like 18 years ago! I started at the store on Guadalupe, and then we moved up here in 2005."

Other Half Price locations might have a small section featuring somewhat antiquated volumes, a group of shelves dedicated to the rarer or more valuable examples of the publishing trade, but 5555 N. Lamar has an entire room devoted to such material.

"That began in the store on Guadalupe," says Spencer. "Sheri Tornatore – she owns South Congress Books now – she was our rare books expert for a long time, and she started it. We had a little annex in the parking lot next door on Guad, and then, when we had to move, they built this little room inside our new location. And we're the only store that has a room like this."

"I think, because it was the first one in Austin," says Miller, "anybody in town who had rare books to sell, this was the only place that could deal with it. So we started out having this large amount of rare books, and from there it's been self-sustaining. And we've gotten known for that, so it's what people in town hear about when they look for places that buy and sell rare books – and they come to us."

One imagines a caper-movie scenario unfolding in the after-hours darkness of the store, some kind of cinematic book heist with, say, Joaquin Phoenix, Paul Giamatti, and Tilda Swinton plotting and scheming among the shelves of true-crime novels, the bins of vintage vinyl, the carts of final-bargain merch. And surely there's some kind of impregnable vault situation going on in the room-within-the-building, right, everything in that abecedarian sanctum locked down with fancy security tech?

"We do have special cases and things like that, to keep the extra-valuable items safe," says Miller, "but it's pretty open for everyone to go in and browse, to look at the books and see what they want."

“One thing that we do now,” says Spencer, “those really old books are out for people to handle. I like that people are able to come in and touch those kind of books and marvel over something that’s been around so long.”

"In the past," says Spencer, "with the older and more fragile things, we've kept them in the back. But one thing I like that we do now, those really old books are out for people to handle. I like that people are able to come in and touch those kind of books and marvel over something that's been around so long."

And, considering the hundreds and hundreds of books and records and other pre-owned or remaindered media flowing through the store every day, considering that the place is a sort of magnet for printed rarities, we had to ask: What's the most interesting, awesome, or valuable item these booksellers have encountered?


Drew Miller: Probably the most interesting to me – and this was originally purchased at our South Lamar store, so it's a little bit cheating, but it was brought up to sell at our store.

Merrit Spencer: And we're the ones who found a buyer.

Miller: True, we're the ones who found someone to sell it to. And it was, ah – are you familiar with who John Dee is?

Miller: Well, we had one of the first printings of his A True and Faithful Relation.

Spencer: It was amazing, all this talking-to-angels stuff.

Miller: Dee was also a cryptographer, and he supposedly had this angelic language communicated to him, and so he had all these giant cryptographic tables throughout the book, everything arranged in an almost psychedelic-looking fashion. This guy named Méric Casaubon basically dug it out of John Dee's yard, where Dee had buried it, and had multiple copies printed up in 1659. And one of the ones Casaubon had printed came in to us.

Miller: And people would come and look at it and have questions about it, and I'd get to do almost a museum-style presentation to groups of people, like, "Here's the history of the book, here's who John Dee was and why he's such a fascinating guy." And then we sold the book to a guy in England, whose wife apparently had connections to British royalty, and he was gonna get the book fully restored and put in a private museum.

Spencer: And he lived down the street from John Dee's house, too.

Miller: So we sold it to the absolutely perfect person to keep it and preserve it.


Given the knowledge of such happenings among the brisk business at 5555 N. Lamar, perhaps old angel-bothered John Dee would've been able to look ahead to the chain's 45th anniversary and predict the success of the Austin store – and of its rare books department in particular. Or maybe that ancient alchemist, a polymath possessed of much arcane skill, would've kenned the present Half Price situation via some form of margaritomancy. Which is, of course, dear reader, divination by pearls.

Want to know more about what it’s like working at that vibrant bastion of bibliophilia near the corner of Koenig and North Lamar? You can find our complete interview with Half Price Books’ Drew Miller and Merrit Spencer at austinchronicle.com/daily/arts.