Chad Salvata's gothic opera is the perfect treat for the season of ghouls, sensual and spooky 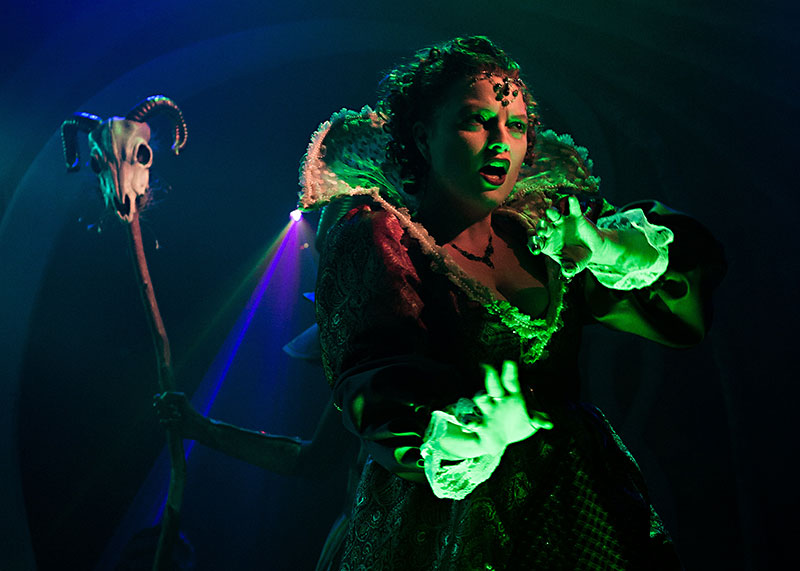 For beauty, for life, and for blood.

If you're unfamiliar with the history of the 16th century "Bloody Countess" (Guinness World Record holder for most prolific female serial killer), I suggest some research to enhance your Halloween spirit.

Ethos and the Vortex Repertory Company spin a fictional history of Bathori's killing spree into a thrumming gothic opera – part folk legend and part demonic faery tale, all a delightfully macabre assault on the senses.

If Ann Marie Gordon's set design is the show's body, Jason Amato's lighting is the circulatory system. A giant dragon's wing dominates most of the stage, housing a suggested mirror nearly large enough to hold the Countess' vanity. A twisted tree climbs skyward, and both are impressively lit; the nerves, blood, and bone that make the stage feel eerily alive. Lighting seems to come from everywhere, even from inside the floor of the Countess' torture chamber, often casting the characters in the perfect balance of light and shadow. The music and libretto are the show's heart, pumping its lifeblood into us. Composer Chad Salvata's throbbing, menacing, and melodic electro-synth score pulses throughout – a character unto itself, as the deep vibration of bass provides tactile discomfort in all the right moments.

The soul, then, must be the performances. Director Bonnie Cullum assembles a fierce, passionate cast of women whose performances – prodding dark corners and exposing themselves (often literally) – are born where angels fear to tread. Leading the charge is Vortex Managing Director Melissa Vogt who brings a commanding presence and powerful voice to the role of Bathori, capturing beautifully the maniacal and methodical Countess as she murders her way through a swath of local maidens in the belief that their deaths (and more importantly, their blood) will keep her young and beautiful forever. Rumor of these atrocities spreads through the countryside, which prompts Bathori's cousin, Count Thurzo (played honestly by Eryn Gettys, who provides a bit of welcome comic relief), and Hungary's King Matthias (a stern, composed turn by Chelsea Manasseri) to visit Bathori's castle to rouse a confession (on Christmas Eve, unless I misunderstood). The cast is rounded out by strong and rather daring performances. Amanda Clifton and Micah Gause play multiple roles – from maidens to myths – and are at least partially nude from curtain to curtain. Betsy McCann Bromley plays Stephan Hapsburg, the Countess' lesbian lover who poses as a man. And Hayley Armstrong is simply chilling as Darvulia, a devilish sorceress from the mountains.

Each stellar performance is complemented well by intricate and beautiful costume design by Salvata and Stephanie Dunbar, along with props and blood design by Helen Parish. And there's plenty of blood, trust me.

There's a lot more going on than I've mentioned, leaving me cursing my own word limit for these pages, as I could go on at length about each individual element. Some moments draw inspiration from classic fairy tales, others are as titillating as they are terrifying. I'd rather leave you with the overall tone (dark, twisted, and gorgeous) than spoil specific scenes, most of which must be experienced to be fully appreciated – the final scene in particular.

Vampyress is a violent, bloody tale, made for mature audiences. It may not be everyone's cup of holy water – the two patrons directly in front of me and the two directly to my left did not return after intermission. However, at least two audience members were on their feet before the lights came up after the finale and were soon joined by most of the rest, myself included.

As the season of ghosts and ghouls approaches, Vampyress is the perfect treat – sensual and spooky. With the final image of the "Bloody Countess" burned into the brains, audiences may find themselves asking, "Vlad who?" 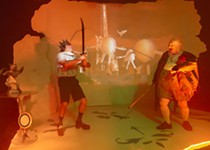