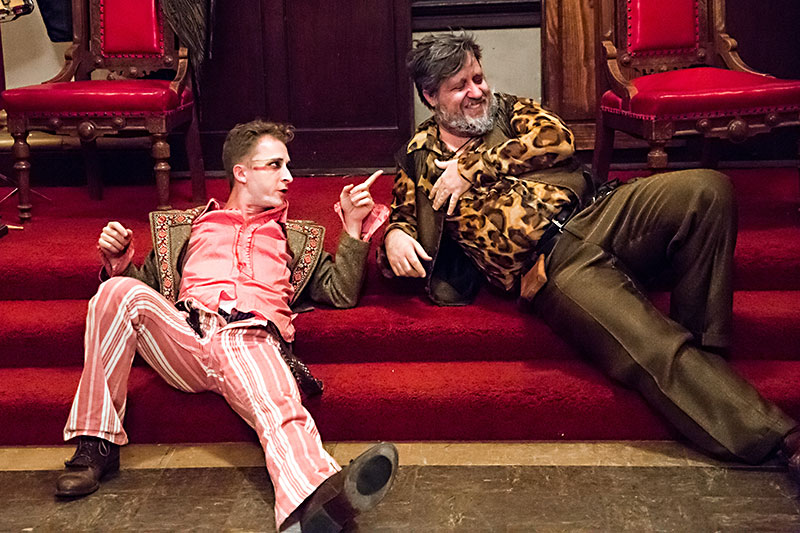 Okay, class. Take your seats and open your programs to page one. This evening's lesson, provided by the Hidden Room Theatre, is on how to produce, direct, and perform the plays of William Shakespeare. Your instructor is Beth Burns, who has directed Hidden Room productions in Shakespeare's Globe (yes, that one), Oxford University (yes, also that one), the Shakespeare Institute, and the American Shakespeare Center. She will be assisted by a cast composed of some of the best and most seasoned actors in Austin, some good ol' dirty rock & roll, and a showcase of spectacular pants.

Tonight's presentation is a textbook-perfect production of Henry IV, the plot of which is as follows: A civil war threatens to swallow Wales whole as English and Scottish forces approach, and while King Henry the Fourth is ready for the throwdown, his son is, well, not so much. Rather than keeping court, the kid has been whooping it up with his ne'er-do-well buddies, the ringleader of which is a portly and gregarious grifter named Sir John Falstaff. When the young Prince of Wales finds himself thrust directly in the path of duty, he must choose between winning his father's respect and continuing his current la vida bro-ca lifestyle.

The cast will demonstrate many essential techniques for mastering the Bard's hefty language and subject matter. These include advanced script analysis, the importance of inflection and timing, methods for firing off an especially prolonged and vulgar chain of Shakespearean insults, character building, character switching, actor as musician, and advanced blocking. Robert Matney gives a master class in comedic performance as Falstaff, while Judd Farris, playing Henry Percy, leads a workshop on lustful revenge and seething anger. As Prince Hal, Brock England provides a lesson on being a lovable cad, and as Henry the Fourth, Rommel Sulit coaches us on what it means to be regal.

This delightful lesson takes place in a lavish hidden room guaranteed to enchant and captivate. Burns teaches the importance of setting over set, completely immersing her audience in red velvet, pillars, thrones, and, at times, actors.

Whether you're an artist, designer, theatre buff, student, adventurer, artist, or lover of literature, you'll find it virtually impossible not to learn something from the Hidden Room's production of Henry IV. It's an opportunity (and a night of flawless classical theatre) you shouldn't miss. From the talent and text to the Ziggy Stardust-meets-Mad Max aesthetic, prepare to get schooled by an artistic team at the tippy-top of its game.