“Pio Pulido: The Last Exhibit of the 20th Century” at the MACC Visiting Pio Pulido's "The Last Exhibit for the 20th Century" is like visiting the crowded, colorful studio of a busy working artist, or visiting that artist's dreams. It is a wide open space holding so much work that paintings have to be stacked one atop another to hold them all. I'm told Pulido, a co-founder of Mexic-Arte Museum, had many more works that simply wouldn't fit in the gallery. This means "The Last Exhibit" is only a glimpse of this visionary artist's output.

The glimpse is a satisfying one. Pulido doesn't spend a lot of time perfecting the realism of his images or refining the presentation of his canvases. There are no frames, and at least one canvas, Consciousness for Mortality (Female), is warped enough so that a corner extends almost two inches from the wall. Landscapes, such as the vivid Landscapes in My Mind, like a Technicolor canyon on Venus, are flattened until they look like they'll slide off the walls. Even more precise images, like Cotton With Pollution Landscape, featuring a single dying cotton plant on a barren plain, surrounded by rotting corn and a dead fish, look collaged. A bright pink worm writhes in the dirt at the plant's base, somehow floating off the surface in a way that isn't quite right. Brown twigs reach into the blue sky beyond, betraying the frayed, scraped-on appearance of paint applied from a nearly dry brush. However, the white, swirling tufts of the single cotton boll are meticulously rendered, giving the moment a bright substance.

In many of the paintings, such as Conversations With Sandro Botticelli (Venus), it is the crudeness that brings the work to life. In Conversations, three women wade in the sea. They're surrounded by fluttering swans and mincing dolphins. One woman stands on a shell at the image's center and takes a deep bow as though she were onstage. The other two stand below. One is being either hugged or drowned by an octopus. The third woman has her back to us and appears to have been badly burned by the sun, as her skin is near crimson in places. As with the Cotton piece, objects in Conversations seem like they've been dropped in from somewhere else. The haphazard look is unapologetic, betraying a dedication to experiment, production, color, and symbolism that is both refreshing and exciting, a "fuck you" to everything traditional European painting is supposed to be.

Pulido does so many things that it's difficult to pin down a particular strength. My favorites happen to be the surreal, Arcimboldo-esque portraits. Self-Portrait features the artist's bust made from frogs, birds, rodents, and fish, topped off with a crown of water. Consciousness for Mortality (Male) forms a profile from moths, caterpillars, and a snake. Contra, palpably darker, is made from toads, tarantulas, and rats. Assassin, by contrast, isn't another collage, but a nearly indiscernible mash of red paint mixed with other, more earthy hues, piled on in thick layers until it looks like a tortured wound, as though the canvas were made from decimated flesh. It's possibly the most violent, uncontrolled image in a show of barely contained works.

It's rare to see this kind of honesty on display – like a heart that has been opened up. We need this from time to time to remember why we even make or look at art. Is it to buy? To enjoy? Or is it to play and speak? To moan the truths we live and die with.

“Pio Pulido: The Last Exhibit for the 20th Century”

Sam Z. Coronado Gallery, Emma S. Barrientos Mexican American Cultural Center, 600 River St.
A version of this article appeared in print on September 1, 2017 with the headline: “Pio Pulido: The Last Exhibit of the 20th Century” at the MACC 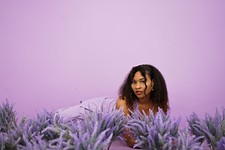 Sam Coronado: In Memoriam
Remembering the founder of the Serie Project and Austin printmaking legend 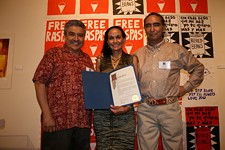 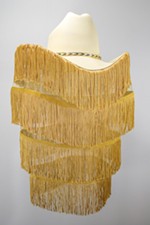 Emma S. Barrientos Mexican-American Cultural Center, Pio Pulido, Mexic-Arte Museum, This retrospective is like visiting an artist's crowded studio and yet provides just a glimpse of this visionary's output