Out of Bounds Comedy Festival 2017 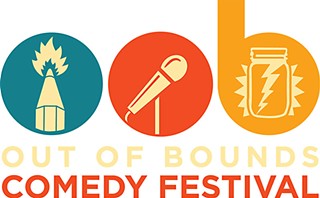 That would be the Out of Bounds Comedy Festival, which traditionally takes that final blistering week before Labor Day and fills it with funny – we're talking improv, sketch, and stand-up by mirthmakers from both the ATX and around the planet. This year alone, Out of Bounds – shorthand: OOB – will be showcasing more than 130 acts from Tue., Aug. 29, through Mon., Sept. 4. Of course, you'll see loads of familiar names from the Chronicle's Guide to Austin Improv and Guide to Austin Stand-Up: The Frank Mills, Available Cupholders, Girls Girls Girls, The Knuckleball Now, Vanessa Gonzalez, Micheal Foulk, Rob Gagnon, Ralph Hardesty. But you can also catch a host of other outstanding acts. Among them:

Marcella Arguello – towering L.A. comedian as hilarious as she is tall;

The Defiant Thomas Brothers – outrageous Chicago duo that so impressed Chron editor Wayne Alan Brenner at last year's OOB that he paid to have them come back;

The Katie and Holly Spectacular – sterling duo work from Katie Rich of SNL and Holly Laurent of The Reckoning;

The fest is spread out over five venues: Hideout Theatre, ColdTowne Theater, The New Movement, Velveeta Room, and Spider House Ballroom. Individual tickets start at $5; festival badges start at $139 and may be purchased at www.outofboundscomedy.com.