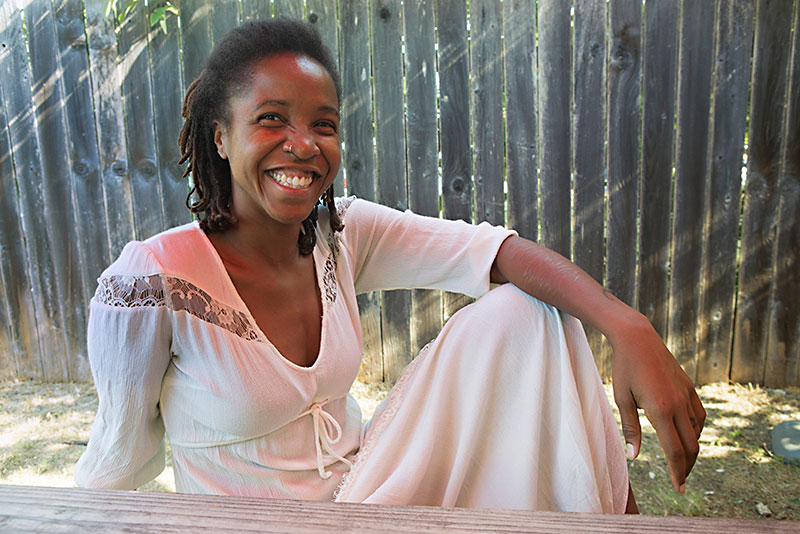 Fatima Mann doesn't wear shoes. Even in August, she can be seen walking the streets of Austin barefoot, because she says it makes her a better human. But that's hardly the most interesting thing about her. As co-founder of two nonprofits (Austin Justice Coalition and Counter Balance: ATX), Mann is passionate about empowering the city's marginalized communities and eradicating what she sees as systems of oppression – from the prison industrial complex to the county's Commissioners Court. She's also one of two grand marshals in Saturday's Pride Parade. While neither will be Pride's first black grand marshal, 2017 will go down in history as Austin Pride's first parade led by two members of the city's black LGBTQ community.

This past June, while speaking at the Texas Equality March, Mann addressed the racial discrepancies within the "rainbow alphabet," as she refers to LGBTQ communities. She elaborates, "When you see Austin Pride, you don't see me. You don't see someone who looks like me – or a Latina or an Asian woman or an Indonesian woman. You don't see any people who look different than the stereotypical white person. And, usually, you see white men." In her eyes, the honor of being made grand marshal, along with Austin Black Pride co-founder and president Sheldon McNeal, is Pride's direct response to her speech. She says she is "absolutely grateful" to the organization for listening and for their attempt to make space for people of color in this year's festivities, "but I wouldn't be me without saying you don't get applauded for doing what you should have done."

Growing up in Connecticut, Mann, who came out at 15, attended her first Pride in New York City. She remembers the city's celebration represented "everybody" (though, she points out, today even New York has started a separate Black Pride because racism exists "everywhere"). Life would later take her to Charlotte, N.C., and Atlanta, Ga., where she again found thriving, diverse spaces for "people of the global majority," as she puts it. She remembers, "It might not be all black and brown folks, but you look out and it's everybody and it's a beautiful mix. Everyone's having a good time – doing what we do as the rainbow alphabet," she says before concluding: "Being in Austin, it doesn't feel like that."

As grand marshal, her goal for the parade is to bring out as many people of color as she can gather, "so people can see we exist here." After all, Mann notes, the Pride movement was built up of brown and black folks – 1969's Stonewall Riots likely would not have happened without the participation and leadership of brown and transgender activists – and they deserve both recognition and representation at Pride and in the community.

Mann’s goal for the Pride parade is to bring out as many people of color as she can gather, “so people can see we exist here.”

Beyond this weekend, Mann wonders if this could be the starting point for Pride and Austin's LGBTQ community to finally acknowledge that racism exists under the LGBTQ umbrella. Using the 12-step program as a guide, Mann believes the first step is admitting there's an issue. It can be as easy as looking around, she says – at work, in meetings, while organizing – and noticing if everyone looks the same. If the answer is yes, "that's a problem. That should always be a problem." She says the conversation is long overdue, but remains hopeful that Austin Pride will continue working with her and other LGBTQ folks of color to create programs and experiences throughout the year. Aside from events, Mann envisions an ideal Austin with greater wraparound support services, from programs for those in the community dealing with mental health issues to spaces for youth of color – a goal she believes could be achieved by Pride reaching out to organizations currently doing that work and supporting them with additional resources. Pride, she explains, can utilize their "privilege to assist communities of the global majority by asking how can they help and following through with the aid." An effort like this, she believes, could ultimately change the community to one that's "encompassing of every type of rainbow alphabet – from every shade to every religion. Every body type. Every pronoun."

It's no surprise that Mann carries this mentality into her nonprofit work. She started Austin Justice Coalition (in March 2015) and Counter Balance: ATX (in fall of 2016), both of which focus on improving quality of life and policy reform to better aid black and brown communities, out of "selfish" necessity. She continues, "I couldn't find peace of mind thinking someone else was going to fight for me and my family and people who look like me in the same way that I could." Mann is also entering her final year of law school. As an attorney, Mann says she will continue fighting by "suing governmental agencies for stomping on the little people." But her goals don't stop there. Mann, who's gone from "activist to policy pusher," knows that lawsuits effect real change and she intends to make change happen with litigation and lobbying work.

Come graduation, Mann's basically taking over the world – after she plans a yoga retreat to get away and clear her head – but for now, for Pride, Mann is looking forward to community building and being in a space where "everybody likes what they like and it's cool ... I just want people to know it's okay to be them because the most unhappy I've ever been is trying to please someone else."

A version of this article appeared in print on August 25, 2017 with the headline: Family of Mann