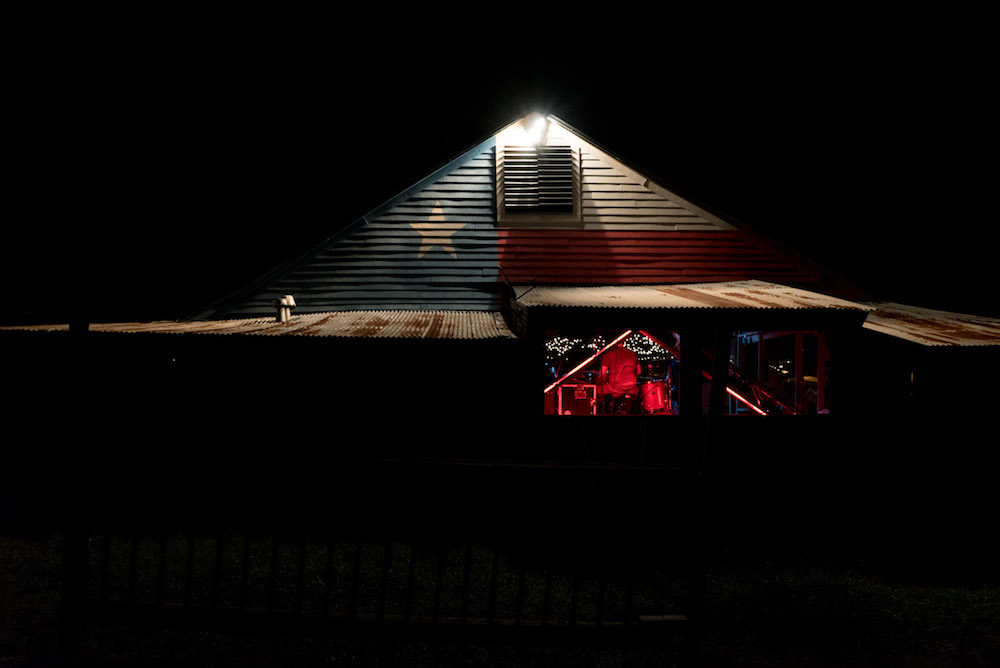 The Swiss Alp Dance Hall lights up as a beacon for the summer crowds. (photo by Annalise Pasztor)

Among eBay’s Britney Spears memorabilia, potato chips in the likeness of the Virgin Mary, and used badminton racquets up for bids, you might have been surprised to stumble upon a far different type of historical relic: the Swiss Alp Dance Hall. Located an hour and a half southeast of Austin, the 7,000 square foot hall was put up for bidding in June and included the on-site café, two acres of property, and a community steeped in Texas history. The listing also included an important note from the seller: “Swiss Alp Dance Hall is over 100 years old, expect some wear and tear.”

Swiss Alp has been owned by three families since it was built in 1896 by German settlers. Unlike many dance halls that served as religious or community centers, Swiss Alp was built for one purpose and one purpose only: dancing. Dance hall culture was a staple of life for Czech and German settlers in 19th century Texas, and the halls were rich social centers for dancing to polka, country, and, now, the occasional pop hit. 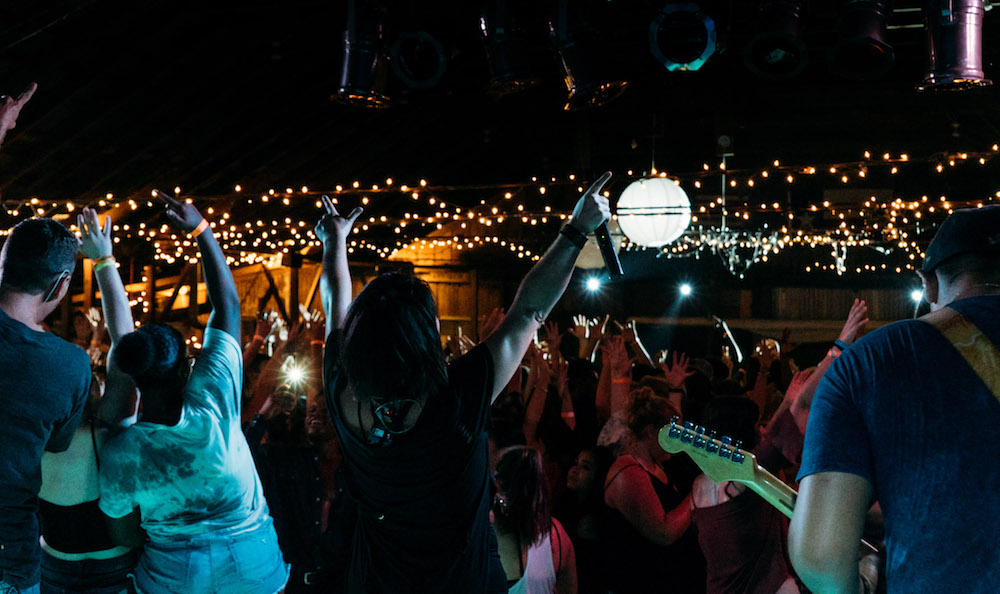 The Emotions, hailing from Shiner, TX, with a 38-year history, get the crowd moving. The hall has been played by the likes of Texas icons Bob Wills, BJ Thomas, Roy Head, Johnny Winters, and more recent stars such as Kevin Fowler, Roger Creager, Amber Digby, Wild River Band, and Asleep at the Wheel. (photo by Annalise Pasztor)

Each week this summer, some 600 teenagers have flocked to the summer dance series hosted by Mark Hybner’s band The Emotions. Driving up to one such dance well after 10pm on a breezy Wednesday night in July, the crowds seem to have materialized out of thin air. The town of Swiss Alp consists of a stretch of highway, a church, and vast rolling hills scattered with ranches, but for half a mile surrounding the dance hall, both sides of a small country road are lined with pickup trucks. Girls sporting the standard denim-shorts-and-boots attire walk in the middle of the road, illuminated by the shine of impatient headlights as a truck full of high school boys lays on the horn. The young crowd comes from all over, some traveling from as far as San Antonio, Austin, and Houston. They dance until midnight to a broad range of country, rock, and pop. 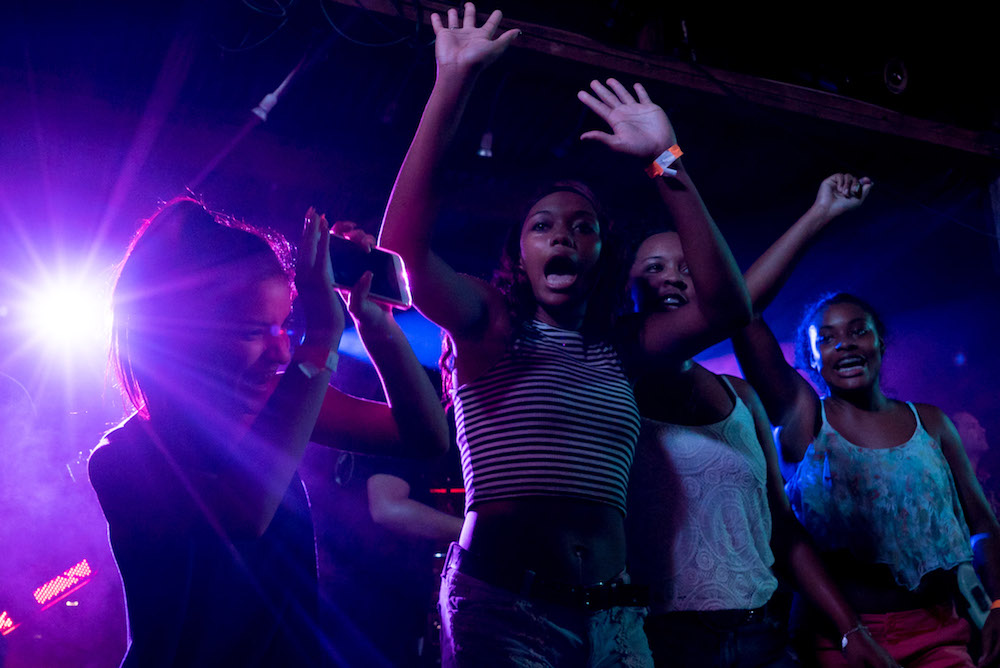 “We love to play at Swiss,” says Emotions lead singer Amanda Bryan. “The energy here is amazing. When you’ve got six or seven hundred teenagers that are going absolutely crazy dancing, it makes you feel alive.” Teens aren’t the only ones that experience the magic of dancing under Swiss Alp’s high wooden ceiling. Saturdays drew a similarly large adult crowd every week until recently, when current owners Kevin and Donna Ustynik decided to take a step back and retire. (Despite more than 100 bids on their dance hall, the eBay auction ended on July 5 without the reserve price being met.) 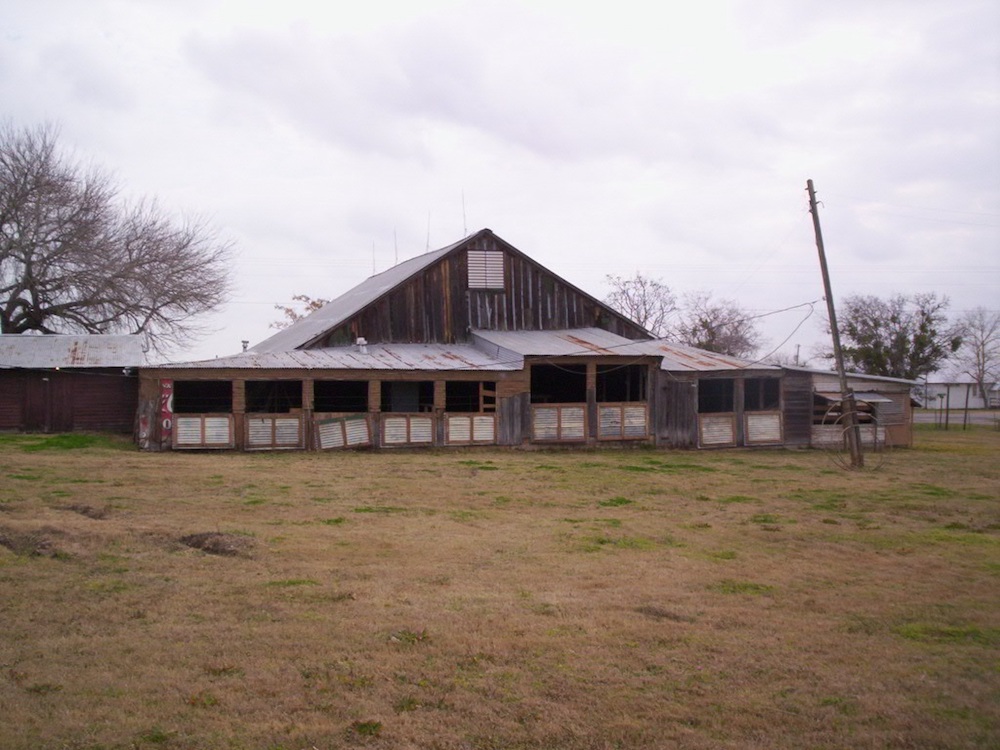 The old hall was in need of foundation work and wood replacement to keeping the weather out of the building. (photo courtesy of Kevin and Donna Ustynik)

Despite the uncertainty of transition, the dance hall culture is still alive and kicking in pockets across the state. Most dance halls, however, have not fared as well when it comes to drawing in new generations. At one time, Texas had about 1,000 active dance halls, but no more than 400 are left standing, and far fewer still are operational and holding public dances. Maintaining these century-old buildings can be a lot of work, and the small communities they’re typically situated in have been impacted by the flow of younger generations to urban areas. Before the Ustyniks bought the hall in 2005, it had been shuttered for 25 years and was falling into disrepair. 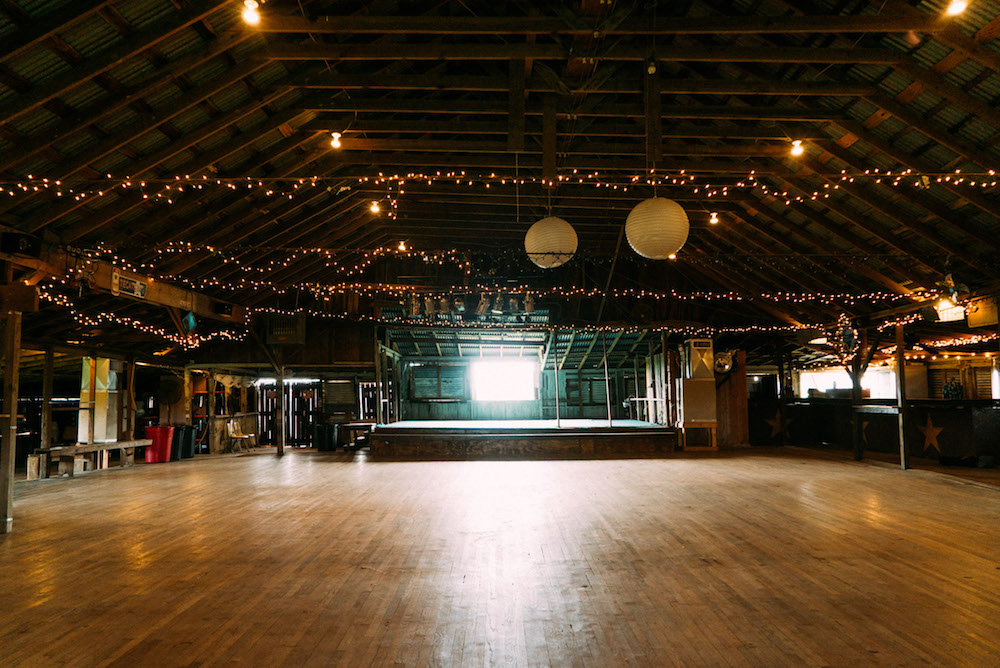 The renovated wooden hall boasts 7,000 square feet of dancing space and is attached to a cafe. (photo by Annalise Pasztor)

After extensive work, they opened the hall back up for business in April of 2006. Old halls can be structurally temperamental and require a certain amount of TLC. The Texas Dance Hall Preservation Inc. works with many owners to ensure they remain standing for generations to come. “People have this romantic notion of wanting to own a dance hall, and it’s a great thought,” says Executive Director Deb Fleming. “It’s not rocket science, but there’s a lot more to it than most people think. It’s a large old building and there are a lot of things to think about. The music and alcohol business are another element to consider. Folks that buy it for a romantic reason, for the mystique of it, I really fear that they’ve put their money into something that is not as simple or quick and easy as they might think – not that someone with a lot of passion couldn’t do it and be successful. It takes money, patience, lots of hard work, and persistence.” 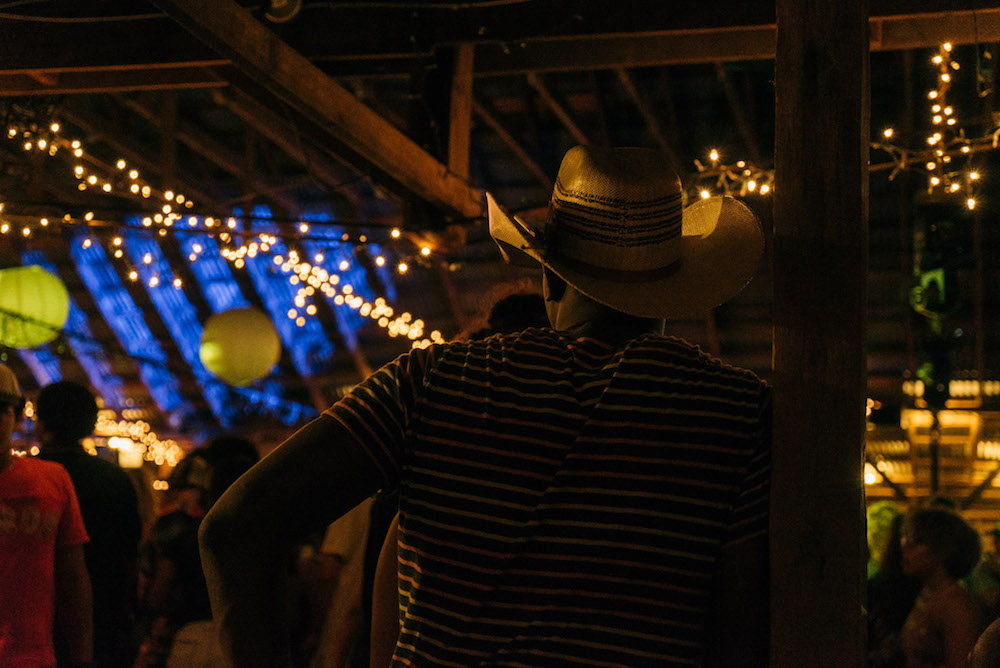 Preparing for the dances each week was a full-time job, but for the Ustyniks, all the effort has paid off tenfold. “We really felt like the community embraced us because we helped bring it back to life,” says owner Donna Ustynik. In the years since, they’ve seen generations of families come through. Couples who met at the dance hall have gotten engaged, kids have grown up and come back from college, and families have passed on long-held traditions. One time a family of four generations showed up to dance together.

“The grandpa was on the dance floor dancing, and the smallest grandchild was standing on his toes,” reminisces co-owner Kevin Ustynik. “That one was one of the things that was really special about running a place like that. The grandparents met there, and they’ve brought the generations back over the time.” 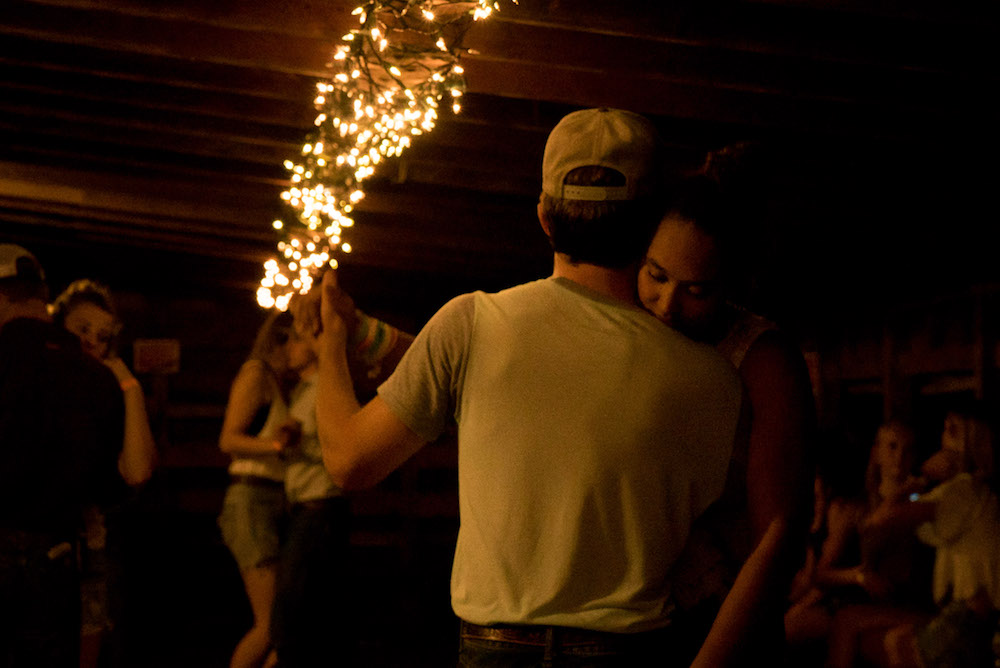 In fact, no one I spoke to seems untouched by the family ties to these dance halls. Kevin himself discovered after buying the hall that the property directly across from Swiss Alp Hall Road is where his great-grandparents settled from Germany.

“We didn’t even know that was the property until we bought the hall, and then when we were talking to everyone we found out we had relatives across the street,” says Kevin. “There were some older people coming to the hall when we first opened that knew my grandmother from coming in the hall when she was younger.” 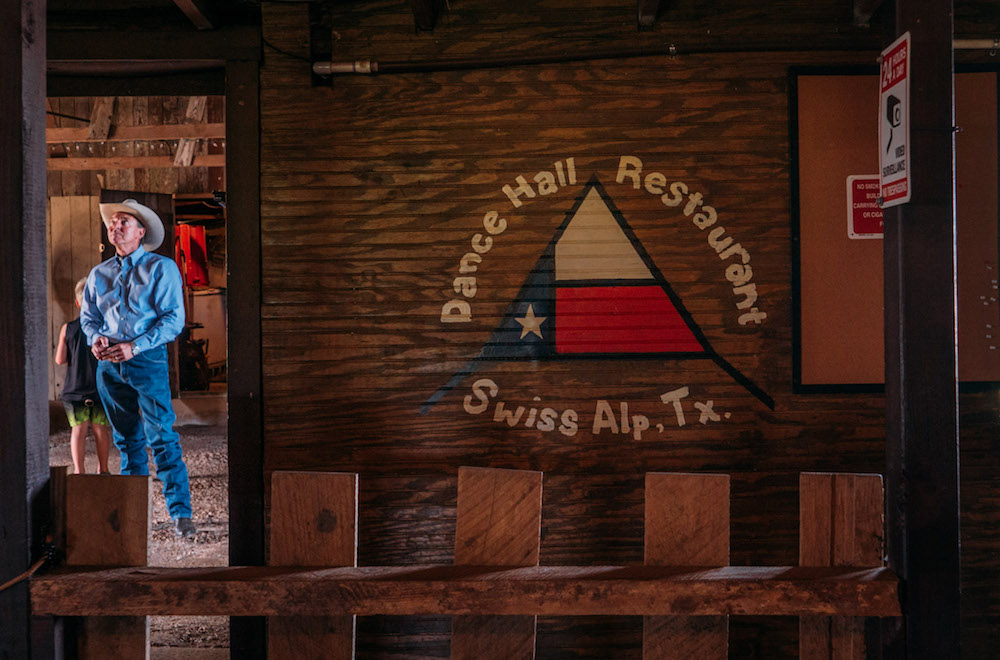 Realtor Joe Schindler grew up in Fayette County, where dancing at Swiss Alp was the thing to do Friday and Saturday nights. (photo by Annalise Pasztor)

Deb Fleming, on a trip to a dance hall out in Panna Maria, discovered that her great-great-grandparents were among the original settlers there in 1854. Realtor Joe Schindler spent years at Swiss Alp growing up, dancing with friends from high school and then college. If you’re a multigenerational Texan whose family settled in Central Texas from Europe in the mid 19th to early 20th century, there’s a good chance you could be connected to one of these dance halls without knowing it.

“It’s this warm, family community feel that we’ve lost in current times when people are somewhat separated and isolated,” says Deb Fleming. “These halls are all about ‘put your boots on, get out there, hang out with your neighbors.’” It’s a feeling that many hope are able to continue into future generations for years to come. 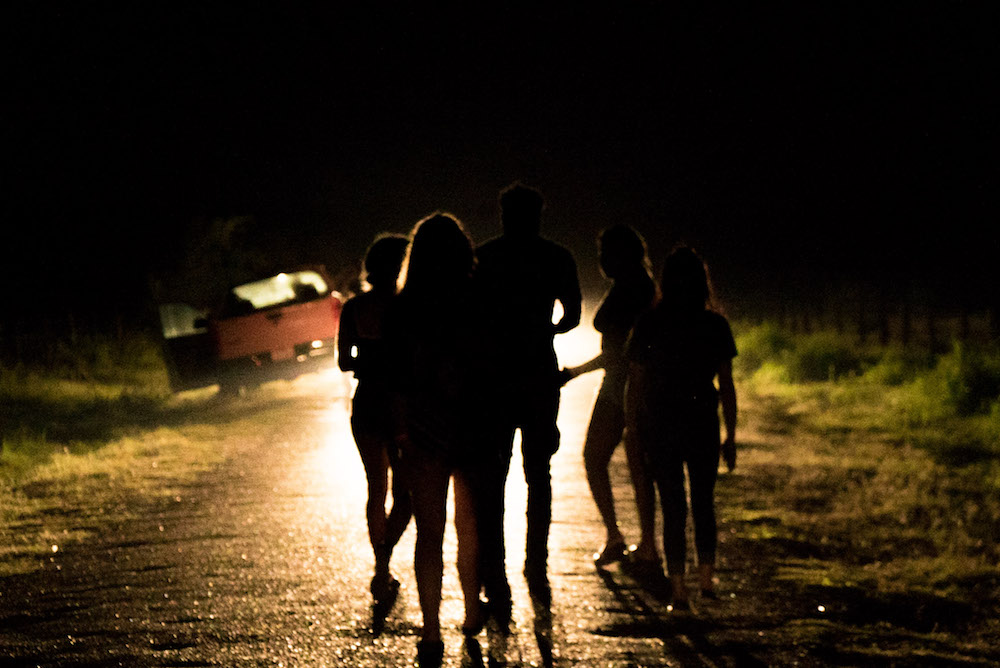 At midnight, the hall clears in a matter of minutes. The last group of stragglers walks down Swiss Alp Road to their car. (photo by Annalise Pasztor)

“Whoever buys the hall, it’s pretty important that they keep it operating on a regular basis so that people know that they have a place to go,” says Kevin Ustynik. “When we first bought the hall we were always introduced as the people who bought Swiss Alp. People would come up to me and if they couldn’t remember my name they’d say ‘Hey Mr. Swiss Alp!’ Whoever takes over, that’s how they’ll become known in the community. They’ll become known as the center of their community, bringing everyone together.”

If the sound Mr. or Ms. Swiss Alp strikes your fancy, the hall is still looking for the next to lay claim to the title.