In this solo show of abstract works, the painter has pinpointed the ungraspable, like grabbing a tiger by the tail 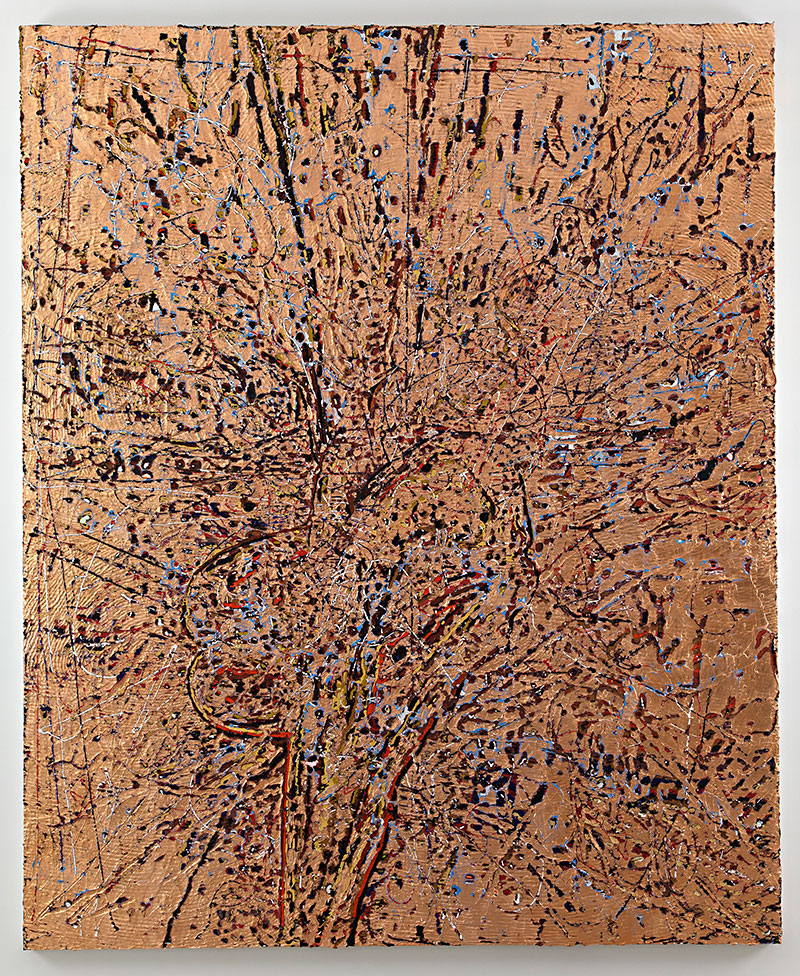 Garth Weiser's 10 is large. It is black. From a distance, it's massive, deep, and even threatening. The canvas is boiling with textures, disturbances like static that cover the surface. If you've ever flown over a large body of water at night, you may have had nightmares of your plane slowly going down, so subtly that you don't realize it until the water, the ocean or lake out your window, starts to glisten and gesticulate in the weak starlight, so the blackness below takes on an ominous life of its own. It is the morbid drama of the last thing you will ever see. That messiness, the sureness that something volatile is present, too close for comfort, emanates from 10. It may also be the face of a distant moon, "10," like Io, revolving around Jupiter, alien and forbidding, too far away to be much more than a suggestion, an archive of questions that must go unanswered. There isn't even a frame to contain the canvas. Only the canvas' white border speckled with black paint unloosed from its moors. 10 is a void. 10 is noise.

Closer inspection reveals intricacy. The writhing is more deliberate, intentional, as though the streams of animated blackness have their own minds, their own existences. The "lines" in the paint are more like veins. One streaks down at an angle from the top left then seems to resolve in a circle, only to become unwound again into a tangle of coagulated pigment. The surface has scales to go with its veins, the entire painting coated in minute stripes. Another painting, I am filled to the brim with joy today, a babe like him, a family like them, a husband like T ... and a full moon too?! Thank you universe thank you!!, with its layers of grays, blacks, browns, and reds, looks like a snakeskin, same texture as 10, different colors. In 10, however, the blackness doesn't speak to snakes, it speaks to an obsidian dragon or a hint of something else – another entity – broader and less known. Among 10's veins are red streaks, like arteries. They crisscross the surface in places, only revealing themselves with close examination, figures in the night or bodies in the fog.

It's too easy to try and make sense of these paintings. Too simple to make 10 into a recognizable entity. "Scales." "Arteries." Weiser has accomplished a less identifiable goal. He's pinpointed the ungraspable, like holding a tiger by the tail. His paintings can be so many things that they are nothing, and their nothingness has substance. The substance is like the glow of rapidly vibrating molecules. It is visible. It illuminates (some, like WNYC sustaining member Haiku, coated in copper leaf, glittering like a gold river, or the overwhelming silver double whammy Diptych #1, illuminate more obviously). There are moments among Weiser's paintings that demand stillness. The paintings roil around the gallery. They achieve the movement for us. They only need to be witnessed. I want Weiser to go a step further. That way lies transcendence, like the Rothko Chapel in Houston. That way lies the spirit. They are still only paintings, and that's okay. But Weiser is on the edge of madness, and I need him to go there.