Hideout Theatre's The Kindness of Strangers 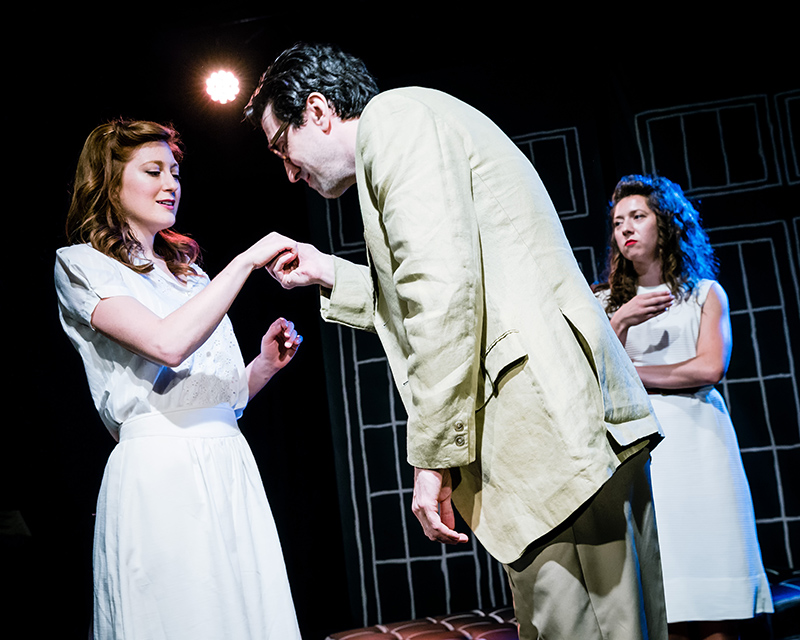 The sermon was fiery, especially for a Presbyterian pastor – the kind of clergyman one associates more with "Blessed are the meek" homilies than fire-and-brimstone broadsides. And yet here was a full-bore rant against deception punctuated by a hand striking the table like a hammer on an anvil, with fervent calls for "amens" from the members of his flock, who were fanning themselves as if the preacher's very words had the mercury rising inside the church. Of course, this was a church in the South – Oxford, Miss., to be precise – where even the most genteel of citizens can go apoplectic at a slight to their honor, good name, or sense of decency, and this man of God seemed to be speaking from a place of personal perturbation rather than scriptural inspiration. He directed his outrage at a specific individual in the congregation: an artist commissioned to paint a portrait of the Holy Family for the sanctuary and had painted not a representational image but – blasphemy! – a work of abstract expressionism!

Now, to my knowledge, Tennessee Williams never built a play around the conflict between a painter of abstract art and the hidebound hicks of a Mississippi burg, but in the July 15 performance of The Kindness of Strangers, the cast of this Hideout Theatre project seasoned an improvised play about such a clash with enough ingredients from the playwright's spice rack, you could taste the distinctive flavors of Williams. Here was a figure whose aesthetic sensitivity set him at odds with those around him (the artist, Delmore Furst) and here the upright standard-bearer of community morals (the preacher man). Here was a willful woman of sensual appetites, too free and wild for small-town morality (Delmore's sister) and here a sensitive soul in a troubled marriage who finds something to connect to in Delmore's art, intellect, and courtly manner (the wife of a Biloxi gallery owner who may be the key to Delmore's big break in the art world) and here a man of material wealth, whose success in business made him believe he could bully everyone around him (the Biloxi art dealer). None of the characters were clones of Williams' creations, but most could've been cousins, sharing the bloodlines and personalities and driving urges of The Glass Menagerie's Tom Wingfield or Summer and Smoke's Alma Winemiller or Cat on a Hot Tin Roof's Maggie and Big Daddy. The fact that the actors didn't go for direct imitations but conjured the spirits of those characters and their internal drives speaks to how much work co-directors Kaci Beeler and Rob Yoho did in schooling this cast in Williams' themes and style.

Moreover, this approach encouraged the audience to watch what was happening not as a parody of Tennessee Williams, where we'd be waiting for the Stanley stand-in to drop to his knees and yell "STEL-LA!!," but as a narrative in its own right, with characters whose interactions and choices have a gravity all their own pulling us to them. As Delmore, Peter Rogers radiated a haughty disdain for the narrow-mindedness of his hometown, but it dissolved into sincerity whenever he talked about his artwork – which he and other cast members described in detail, one of the most impressive measures of their ensemble work. Rogers and Margaret Hunsicker built a quite credible sibling relationship (with hints of something deeper). The connection between Rogers' Delmore and Katie Dahm's hothouse flower left you wanting their scenes to go on just a little longer. And Aaron Saenz made the pastor not just a straw man of religious oppression but a man of honest passions.

Visitors to any remaining performances of The Kindness of Strangers won't get to meet Delmore or anyone who surrounded him that night in July, but I feel certain they'll encounter a similar band of characters they'll recognize: people of the South, where traditions are deeply rooted – especially religious traditions – and the artists, outsiders, and misfits among them are fighting to be free.

The Kindness of Strangers