Forklift Danceworks' My Parks, My Pools, My City 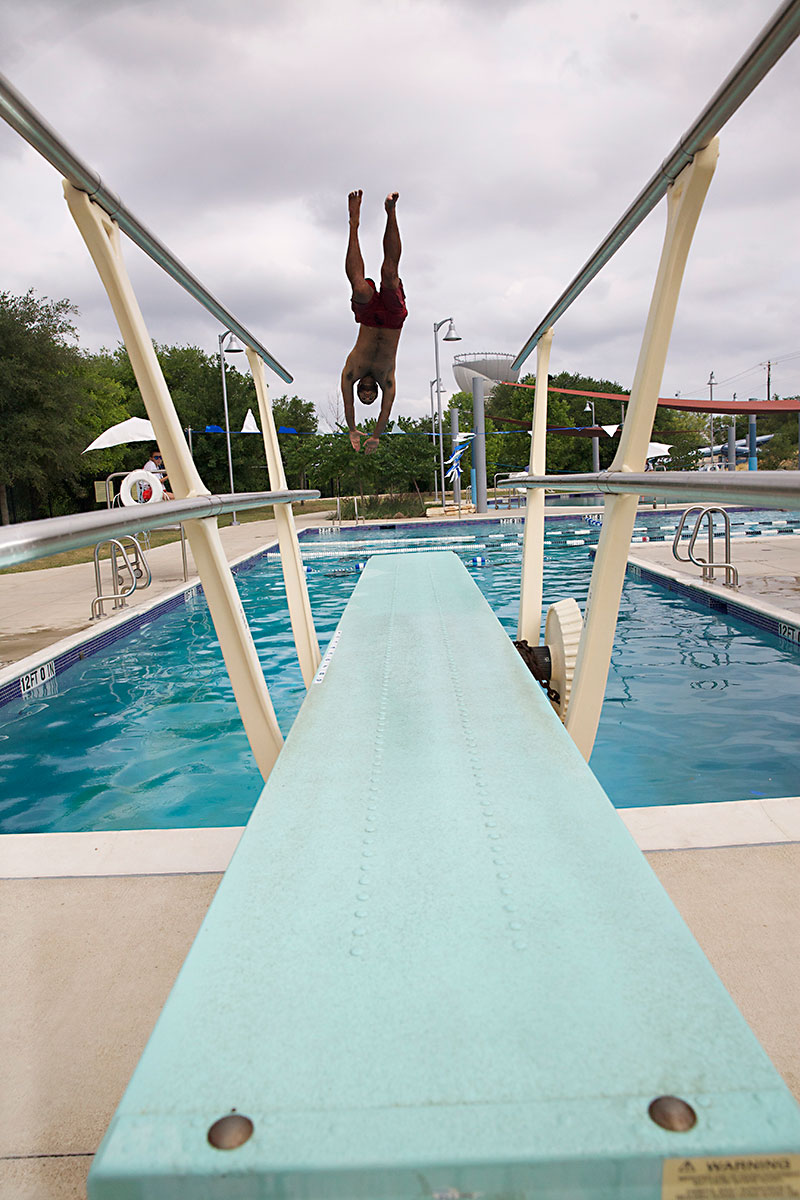 At one point in Bartholomew Swims, lifeguards invite neighborhood residents and audience members to mark off the L-shaped perimeter of the old Bartholomew Municipal Pool – the one that offered reliable summer afternoon relief and was home to countless family picnics and birthday parties every summer from 1961 (when adult admission was 30 cents) until 2008. When the Forklift Danceworks team interviewed Tap – that's Jonathan Tapscott, a longtime Bartholomew swimmer and a pool mechanic who first worked for the Parks & Recreation Department's Aquatic Division in 1982 – he told them that the old pool was also a gathering place for notoriously raucous last-day-of-school crowds from all over North, Central, and East Austin. There was the occasional fight, but most of the time, the biggest trouble was when high school underclassmen "bombed" the senior lifeguards, repeatedly taunting them with forbidden activities – diving into the shallow end, dunking each other, running on the decks – which sent the lifeguards' whistles and safety protocols into constant, frantic action. (The younger teens had the last laugh: By the time they had racked up enough infractions to be banned from the pool for the rest of the day, they were ready to saunter home anyway.)

By that time, the pool was nearing 50 years old, which is about the average age of Austin's pools but well beyond the expected life span of a public pool, which is 25-30 years, according to the PARD Aquatic Division. Even if it was expected, and even though the loss gave the city and residents the opportunity to develop a vision for a new, better, safer, and more sustainable pool facility on the 51st Street site, losing the old Bartholomew hurt. It hurt more when three summers without the pool became four, when asbestos was discovered in the pipes and had to be abated, and then five, when groundwater that crept up through the muddy hole left behind by the demolished pool had to be tested. But finally, in 2014, the new Bartholomew opened as a state-of-the-art family aquatic center with not just one but three pools – two for kids and one for laps and diving – as well as a picnic area, shade, and two water slides. As the Bartholomew Swims participants conjure up the old pool with their bodies, they stand along the new pool's wide, trip-hazard-free decks and at the universally accessible sloped entrance to the wading pool, cool water lapping at their ankles, observing each other in stillness under the shade coverings.

Bartholomew is a success story, which is why when PARD director Sara Hensley invited Forklift Artistic Director Allison Orr – you know her and her A-team, Krissie Marty, Graham Reynolds, and Stephen Pruitt from The Trash Project, PowerUP, and The Trees of Govalle – to develop a pools project, they chose Bartholomew as the first Eastside site for the three-year initiative My Park, My Pool, My City. But not all the pools that break beyond sustainable repair – and the pools are going to break, PARD has predicted, some sooner, some later – will be reopened as a Bartholomew, which had a final price tag of $5.7 million (most of it was paid for by a 2006 bond). Some pools, when they break, won't be reopened at all – for example, if PARD's Aquatic Master Plan indicates that a neighborhood pool is no longer aligned with demographic need.

PARD intends to use the plan, slated for release later this summer after years of assessing pool conditions and demographics and soliciting input from residents, as a decision-making tool when pools do fail. Many unknowns remain, including where much of the money will come from. Part civic engagement initiative, part ethnography project, and part movement performance, My Park, My Pool, My City attempts to help us better cope with these unknowns and understand the challenges, in typical Forklift fashion: by showing us the humans and demystifying the work. In Bartholomew Swims, Tap points out the drains, returns, and skimmers of the pool's filtration system. Other members of the maintenance crew demonstrate scuba-enabled pool-bottom inspection. Lifeguards perform swim strokes, drills, and rescue techniques.

In a quiet moment near the end, Tap opens what looks like a small tackle box, leans over the pool, and scoops up some water into a small plastic beaker. He adds a few drops of dark liquid and holds the beaker up to the light, examining the color of the water to determine the chlorine level, simultaneously speaking the name of each of PARD's pools and splash pads. In rehearsal, he and Orr discussed whether he should include the names of pools that are currently closed, like Mabel Davis Municipal Pool in Southeast Austin, which was left to dry up this year after it leaked close to half its initial filling in one day. While the pool's fate is still indefinite, they decided it's important to say its name.

A version of this article appeared in print on July 28, 2017 with the headline: Diving Into the Wreck