Throwing a Few Back With Shit-faced Shakespeare

When it's time to perform Shit-faced Shakespeare, here's how an actor prepares 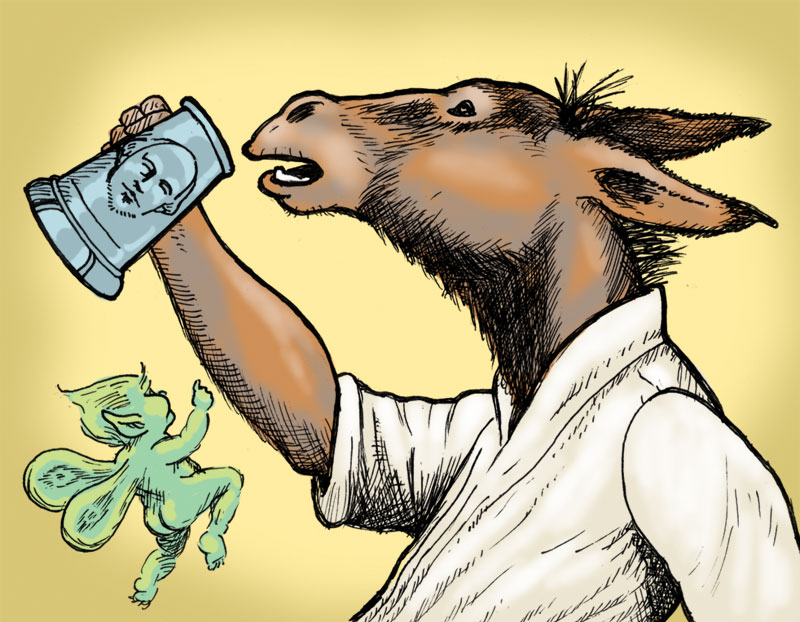 It's three in the afternoon and time for a drink. After all, you have only four hours until you have to appear onstage plastered.

If the notion of an actor getting drunk before the play seems odd, then it's time you met Shit-faced Shakespeare, a theatrical enterprise in which an actual work of Shakespeare's is performed by a small troupe of players, one of whom is, as advertised, shit-faced. Which means said actor is likely to disrupt the otherwise straightforward presentation of this play with, say, dropped lines, made-up lines, interruptions, personal commentary that has nothing whatsoever to do with the story being told, impromptu dancing, or even nudity – in short, anything a person giddily under the influence might do in life.

This may sound like a cocktail for chaos – and it is, which is one reason audiences have been flocking to Shit-faced Shakespeare since 2010, in the UK, where it originated, and its four outposts in the colonies: Boston, Atlanta, the Twin Cities, and Austin. But it's a cocktail measured and mixed more meticulously than any craft drink you'll find in a high-end hipster bar. The team behind Shit-faced Shakespeare – that would be the just-as-genteelly-named Magnificent Bastards – realized early on that for its core concept to be sustainable, the element that made it at once so appealing and so volatile needed to be managed – handled in such a way that the shit-facedness always added to the entertainment value of the show, not detracted from it with, you know, 90-proof hotheadedness and unintelligible rants. So the condition of the designated drunk was critical, and how that person got sauced was codified to ensure that at showtime the player hit the stage a "happy drunk."

The drink-up, as it's called, is the four-hour span prior to the performance during which the player transitions from sobriety to inebriation. No one does this solo, pounding down a 12-pack or guzzling a box of vino in some lonely corner backstage. While the player may choose the booze, it's another actor who controls how much is consumed and when. Each drunk has a wrangler, notes Isto Barton, a member of the Austin Shit-faced Shakespeare troupe, and "the wrangler pours the drinks and ensures the drunk is drinking at a decent pace, drinking water, and fed – the drunk always eats before going onstage! They keep notes of this throughout the four-hour drink-up."

Austin troupe member Kenneth Williams finds the notes helpful when he pulls wrangler duty. "I like to go back in our written show reports and see how much that person had to drink the last time they were drunk and go from there," he says. "Sometimes that person feels like having one less, one more, or just the same amount. Once we have a ballpark of how much they want to drink, we like to make sure the drunk is in a happy state, so they get to pick what happens during their drink-up. Activities range from sitting and talking to watching movies to hanging out at the pool. Personally, I like to force everyone to play the game that ends all friendships: Monopoly."

The process of getting drunk is different for everyone, Barton adds, "and the drunk's diet/water consumption/sleep/etc. for the last few days all [play a] part in where they'll be when we get them onstage. We start every drink-up asking how the drunk is feeling and what their sleep/drinking/eating has been like. Based on that, we keep a watch on how they are feeling throughout the drink-up to make sure they're feeling appropriately schnozzled for the show! At the end of the day, it comes down to communication. We've all gotten to know each other really well, so it becomes a little easier to tell when the drunk is in a good space."

Of course, just because the wrangler has succeeded in cultivating a genial state of lubrication before the show doesn't mean anyone can predict what the juiced actor will do come showtime. "What I find most exciting and challenging is that you really have no idea what the drunk is going to do or say in the moment," says Barton. "They could forget a line and make something up, say the opposite of their line, say someone else's line, or just walk off the stage. As a sober actor, you have to stay so present and so ready to run with whatever it is the drunk throws out. And the audience loves to see the sober actors trip up; it's like seeing someone on SNL crack a laugh. Sometimes it can be difficult to keep it together."

Just as the way each actor gets drunk is different, says Barton. "Each drunk is different. I'm a big old ham – as I am in real life. The alcohol and the audience exacerbate that for me. But it's much less about the drunk rolling with the show than it is about how the drunk and the actors play together. The fun of the show is the combination of forces. We spend meaningful time reflecting with our drunks – especially when they join the troupe to give feedback and learn how to play best in the show. The best shows are when the drunk is staying within the world of the play and putting their fellow actors through hell!"

Williams managed something like that in a recent performance of Much Ado About Nothing, the show that the Austin troupe alternates with A Midsummer Night's Dream. "I can be a bit mischievous as the drunk, myself," Williams says. "The morning before my last drunk show, we had a rehearsal in which we talked about the dramaturgy and background of Much Ado, the idea being that the more we knew about the world of the play, the more we could play with the drunk while staying immersed in the story and setting. Well, that night, in my drunken state, I decided I would test the sober actors on their knowledge of the dramaturgy by asking questions and putting them on the spot."

Williams, as the virtuous soldier Claudio, turned to Barton's villainous Don John and began peppering him with questions: "What war did we just come from? How did the war go? What was your favorite part of the war?" Granted, not the most outrageous situation one might expect in a show titled Shit-faced Shakespeare, but Barton calls it "one of the most fun times I've had onstage, because I had to think on my feet, the audience saw me having to really work with the drunk, and the drunk got to play his game."

What becomes clear the more one peeks behind the scenes of Shit-faced Shakespeare is that the show's drunk is never one person's burden; it's a shared responsibility from start to finish. As the roles of drunk and wrangler rotate through the cast, every player gets to be the person tending to the drunk and the drunk being tended to. With the casts as small as they are – just five to eight actors – and every play cut down to just an hour, every actor has to interact with the drunk actor onstage. And because every performer wants the show to be fun for the audience, they work to keep those interactions enjoyable. The Magnificent Bastards have even produced an extensive "how-to guide" that, according to longtime Bastard Laura Sullivan, "is filled with best practices and things that we've learned over the years that work and, of course, things that don't."

Then there's the post-performance period when actors traditionally belly up to the bar. The Shit-faced Shakespeareans spend that time in "water hour." The cast hangs out with the designated drunk while he or she hydrates and sobers up – again, getting that person to a good place. Then the wrangler delivers the now-former drunk to his or her doorstep. The audience is long gone, but for this company, the show isn't over until its most vulnerable member is safely home.

Shit-faced Shakespeare will perform A Midsummer Night’s Dream on Sat., July 22; and Much Ado About Nothing on Sat., July 29, both at 7pm at Spider House Ballroom, 2906 Fruth. Info at www.shit-facedshakespeare.com.

A version of this article appeared in print on July 21, 2017 with the headline: Bottoms Up, Bottom