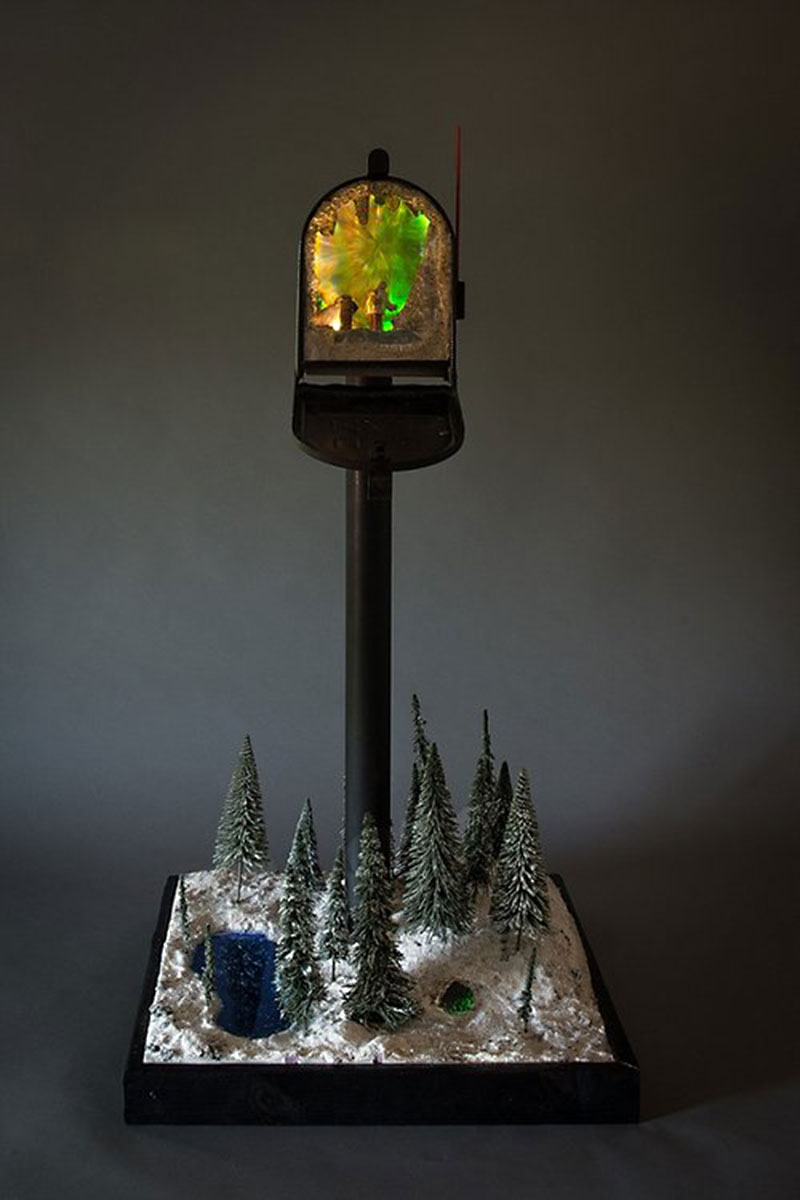 It Is With Deep Regret That I Inform You ... #1 by Daniel Rivera

Ryan Montgomery's oil painting Buttermilk Pie probably shouldn't interest me as much as it does, but even before I saw it in person, the image in the catalog for "The People's Gallery 2017" caught my attention. It's relatively simple: a photorealistic dish of mostly consumed buttermilk pie and a metallic spoon sit on what appears to be a buttermilk pie-themed tablecloth. The tablecloth features elderly hands whisking a dish of buttermilk and more buttermilk being poured from one bowl into another. The tablecloth is decorated with weaving, checked patterns like mosaics in yellow, red, brown, pink, and pale blue. The mosaics rise and fall, separating and organizing sections of the tablecloth like panels in a graphic novel. Red letters in an upper corner spell out the word BUTTERMILK.

Montgomery spares no expense indulging his – and our – buttermilk fetish, which may account for his painting receiving the most People's Choice votes in "The People's Gallery 2016" exhibit and subsequently being added to the city's permanent art collection. According to his accompanying statement, buttermilk pie was an essential part of his Southern upbringing, a dish Northerners just don't understand. I was born and raised in Texas, and I've never had buttermilk pie. I'm not even sure I've had buttermilk. But who cares? Montgomery's painting makes me feel like I love buttermilk pie, too. It's not as straightforward and basic as the food porn found in magazines and cooking shows. It veers closer to Norman Rockwell – a nostalgic delight in the easiest pleasures. But where Rockwell told the entire story, leaving little room for interpretation, Montgomery provides all of his narrative on the plate. The pie, spoon, and dish are the real focus. How many people ate that pie? Maybe a whole family. Or maybe one kid, back home for the holidays, cheeks full, lips spread in a sated smile.

Part of the pleasure of viewing Buttermilk Pie is its setting in Austin's City Hall, possibly the most architecturally stunning structure in the city. The interior is a combination of glittering angles and staid offices, the kind one should expect from a working government building. City Hall is also a dynamic art-viewing space. This is largely due to the high atrium ceiling characterized by swooping copper-toned beams. The energetic formal relationship between artwork and architecture is especially notable while viewing Dameon Lester's Mass Balance, a large, angular plywood sculpture like a colorful geometric egg or galactic gem. Its lines and planes diverge and reconnect precariously. The sculpture is set up in front of a window looking south onto First Street and the river, a panorama of kayaks, trees, and big sky. Looking the other direction, Mass Balance's lines mimic those of the ceiling, so Lester's object and its space speak to each other with tantalizing harmony.

"The People's Gallery 2017" features close to 90 artists and more than 100 paintings, sculptures, photographs, and installations, including previous People's Choice winners. Flip Solomon's black-and-white illustration Seeds is contemplative and sweet; Daniel Rivera's sculpture of a mailbox and snow scene, It Is With Deep Regret That I Inform You ... #1, is a bizarre horror story; Denise Fulton's Doe Eyes, a portrait of a young tattooed woman curled up on the ground, suspicious, waiting, is expressive, simple, and alive. The show offers satisfaction on multiple levels: a look inside Austin's seat of government, a peek at some provocative – and beautiful – architecture, and time with an expansive selection of well-crafted, innovative, and sometimes strange work by an army of local artists. It's a lot to take in with only one visit. I may go back myself.