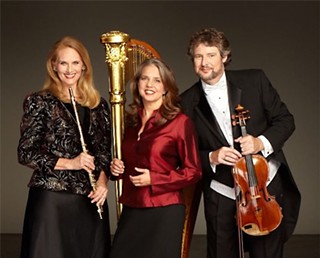 Asked if you'd like to attend a concert, you think, "Ah, yes. Austin. Where bands are a dime a dozen and there's music in every bookstore and beer hall." Then you find out it's a classical concert and your mind's eye paints a picture (impressionist, expressionist – something European) of men in tuxedos and monocles and women in ball gowns and jewels dangling from their ears.

Then you remember it's Austin, where some presenters take a delightfully informal approach to sharing some of the best music ever written in alternative spaces.

So it is with Revel, founded by pianist Carla McElhaney and cellist Joel Becktell, which seeks to buck classical's built-in formality by "inviting listeners everywhere to dispense with the standard protocol of the day, rebel against the straight-laced austerity of the modern concert hall, and 'come as you are, clap when you feel like it, and revel in the music like no one is watching.'" In its 2017 Solstice Festival, a summerlong concoction of classical music, poetry, and proximity, the concerts take place in unexpected and intimate rooms such as, yes, your local bookstore and beer hall. The musicians are in touching distance, there's a premium on live interaction between them and the audience, and everyone is treated as an old friend.

Most of the concerts take place Sundays at noon at 4th Tap Brewing Co-op, a tasting room with a grand piano and a similar bollocks-to-the-rules approach in which Revel revels. The audience sits at picnic tables, sipping beer while the performers do their thing in a nook that provides a pleasant reverb.

The Allegro Chamber Trio – Megan Meisen­bach (flute), Elaine Barber (harp), and Bruce Williams (viola) – bent toward the dramatic in a recent program featuring music by Bernard Andrés, Jacque Ibert, and Carl Nielsen. Barber's harp served as a powerful rhythm section, the structural foundation under Williams' moving strings and the ebb and flow of Meisenbach's flute. The highlight was "Till Human Voices Wake Us," a composition by Don Davis penned as a birthday gift for his wife. The Matrix composer was inspired by the final lines of T.S. Eliot's "The Love Song of J. Alfred Prufrock," and the trio's performance evoked the poem's wistfulness and longing, with a second movement that had a patina of Philip Glass about it, resolving at the last in long, sweet, hanging notes.

The finale, the first movement of Debussy's Sonata for Flute, Viola and Harp – the "reason this ensemble exists," said Williams – offered yet more drama. Stately with interjections of inquisitiveness, the work set strands of tension between flute and viola, then wove them together to double the melodic line before freeing them to divergent aural paths.

The other notable aspect of the Solstice Festival is the interspersing of spoken word with classical music. When they complement each other, there is a powerful symbiosis, as shown in a June concert at Malvern Books in which Becktell performed J.S. Bach's first two cello suites and, between the movements, poet Nathan Brown read poetry by Charles Bukowski and works by Brown and collaborators that were inspired by Bukowski. Becktell played the Bach suites on a Baroque cello, an instrument with exceptional resonance and tone, through which the suites "revealed their secrets." This reviewer is a sucker for the cello's timbre, especially under Beck­tell's bow, a sensory feast as the performer, eyes closed, ran the fretboard with deft fingers. The Revel injunction is to listen unrestrained, but Becktell's work silenced us all.

The poetry of Brown and his cohorts offered resonance and tone of a complementary nature. Pointed, introspective, political, bawdy, and always full of humor, Brown's easy delivery and ongoing conversational connection both to Becktell and the audience bridged the formal setting of the bookstore.

Besides his own deft work, Brown illuminated his collaborations with singer-songwriter Jon Dee Graham, whose counsel for starving artists was a highlight. Brown also introduced the politically charged works of Ezra E. Lipschitz (a pseudonym), including a recipe for how to be a hermit and advice for the supposed winners and losers of last November's presidential election. Brown will feature in a number of upcoming concerts: Go see – and hear – him.

Seen / Soon: Dec. 15
A grand send-off to musical theatre at UT with The Drowsy Chaperone and feeding off the solstice darkness with Carla McElhaney and invoke